Proverb 20 1, “Wine is a mocker, strong drink is raging: and whosoever is deceived thereby is not wise.”
Proverb 20 17, “Bread of deceit is sweet to a man; but afterwards his mouth shall be filled with gravel.”

The following article was scanned from the February 7th, 2003 Chicago Sun-Times... 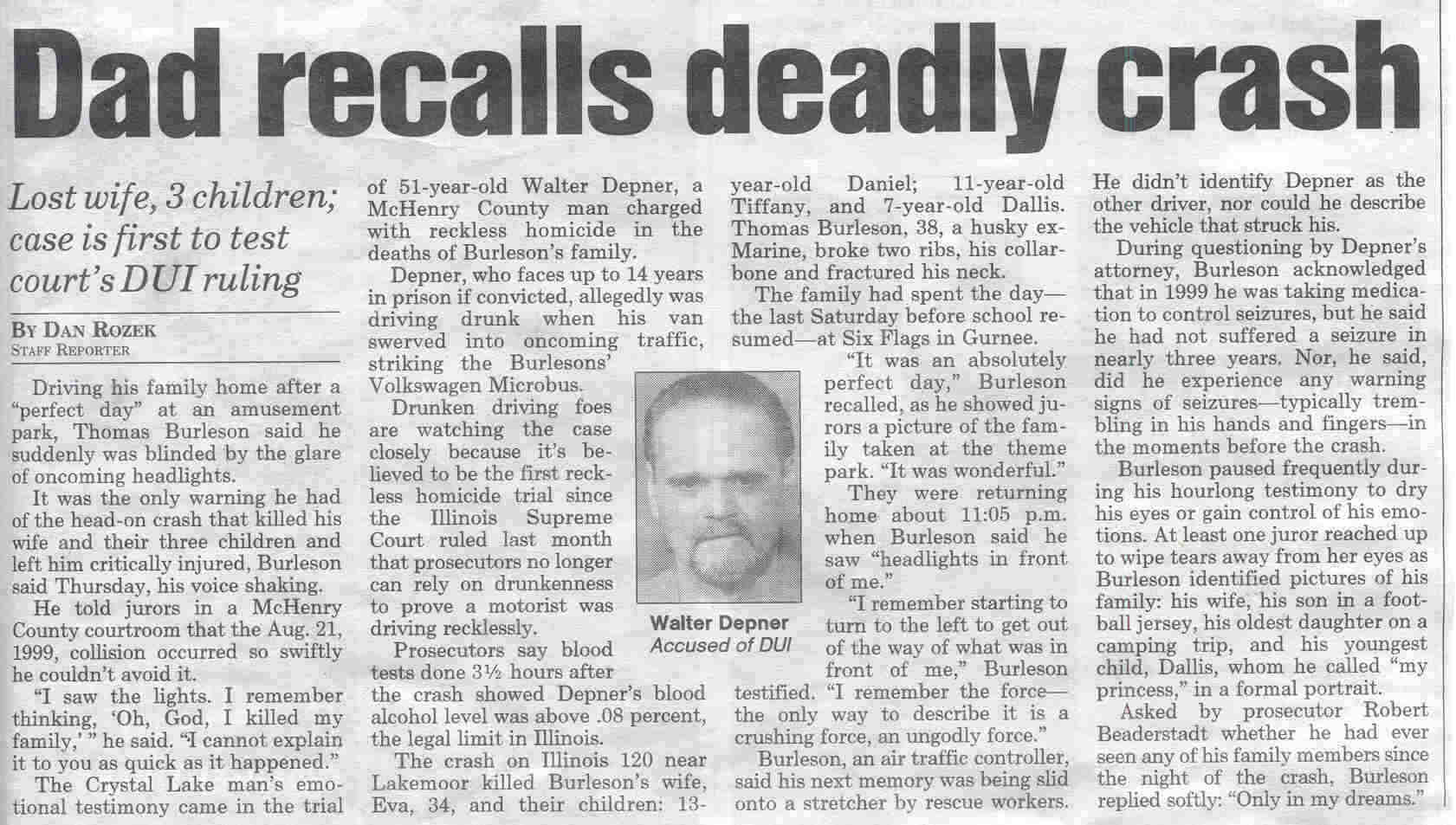 I am so sickened every time I hear of an intoxicated driver who kills someone(s). Hundreds-of-thousands of people are killed every year in the United States alone because of liquor related injuries, accidents and crimes. How 'bout the drunken ship captain, who not too long ago ran a massive oil tanker into the ground... totally devastating the environment of the whole area for years thereafter. Then there's the billions of dollars it costs Americans every year due to soaring insurance premiums because of medical costs, lawsuits, etc, etc, et cetera! The costs are staggering to the taxpayers of America for all the legal proceedings, court-room costs, salaries, extra police patrol, prison expenses, prevention, rehabilitation and hundreds of other expenses directly due to beer.  It's sickening and a crying shame—an embarrassment to the American public.

I like to use the term "beer" for a good reason...that reason being that too many people (especially beer drinking believers) like to condemn hard liquor (such as Jack Daniels and Smirnoff), but fail to condemn beer since it has a lower alcohol content. Listen friend, beer causes much more injuries, deaths and murders than Jack Daniels ever did. I'm not condoning hard liquor--not at all! I am condemning beer as an unsuspecting evil by the masses of society. People let down their guard when drinking beer because they have the mindset that beer is not as bad as hard liquor. This element of deceit makes it all the more dangerous.

A perfect example is electricity. Everyone who has seen what electricity can do to the human body fears high voltage, but did you know that more people are killed by 115 volts than by any other level of voltage?  Yes, it is true! Why? Because most people have the mind set that only high voltage is dangerous. The truth is that that the 115 volts coming into your house can be lethal if you aren't careful. Likewise, people have become so accustomed to beer that there is no fear of what it can do.

Beer may destroy your life!

You would be better off playing with rattle snakes than to play with beer. Beer is more like playing Russian roulette...you are playing with your life (and worse, the lives of other people). Something is very wrong when the government forces you to wear a seat belt, but you can drink a beverage (known for it's deadly consequences over and over again) and the government does nothing to prevent it from happening. I say "nothing" because despite minor efforts to lower legal alcohol limits and promote driving safety... masses of people are still dying--SOMETHING IS VERY WRONG IN THIS COUNTRY.

We are a messed up nation when it comes to our laws. People are arrested and put in prison (sometimes for decades) for dealing illegally with marijuana, yet how many deaths are caused annually by marijuana? Very few compared to the staggering number of deaths caused by beer and other alcoholic beverages. Listen my friend, you cannot eat at the devil's table without being food poisoned. You cannot play with the devil's fire and not get burned. Satan only shows us the neon lights of Las Vegas, he doesn't show us the broken lives and ruined families because of sin. Sin destroys!

It is a sin to get drunk, not to mention totally irresponsible. Drunk people CAN'T think logically and are a risk to themselves and others.  It is a sin to take a chance with the life of another person. So many people get drunk and hurt other people. This is exactly why beer and ALL alcoholic beverages should be totally outlawed. If beer were outlawed, 95% of all the alcohol caused deaths would cease. The amount of illegal beer would be minimal compared to the rivers of booze that presently flow through our nation every day.

Sadly, the family murdered in the above article could have still been alive today. Too bad evil lawmakers legalized (and continue to legalize) alcohol. God will hold every single person liable for their part in the legalization, production, transportation, sale and consumption of alcohol. Alcohol is nothing less than LIQUID DEVIL. I won't argue with you whether or not it is a sin to drink beer... though I think it is. Howbeit, I will say that the sinful effects of beer has been documented well throughout the graveyards and battered families of history. Alcohol is deceitful, a demon in the cup. When you drink beer, you are living dangerous friend. I like what my pastor Dr. Jack Hyles used to always say, "You can't take two drinks of beer if you don't take the first." That's very good advice. You can't take a third drink of beer, if you don't take a second... and so forth. No one ever got drunk on beer who didn't take that FIRST drink. It all starts with that FIRST drink.

I Apologize To You God

God is Against Alcohol, Period!

“I tell you that the curse of God Almighty is on the saloon.” —Billy Sunday

“Wine is a mocker, strong drink is raging: and whosoever is deceived thereby is not wise.” —Proverb 20:1

"Whiskey and beer are all right in their place, but their place is in hell." —Billy Sunday

"The man who votes for the saloon is pulling on the same rope with the devil, whether he knows it or not." —Billy Sunday