The Apostasy of Lifestyle Evangelism

Look in your local phone book and count the number of churches in your city or town. Then consider how many of them cry out against the falsehoods of Catholicism and other false religions in your area. There is not a bigger false cult in American than the Roman Catholic Church, but you'd never know it from the silence of most Christians in America. Souls are going to Hell. Why are so many Christians silent about this horrible menace? It is apostasy!

America is inundated with apostate ministries today that only speak within the realm of positive thinking, spread joyous tidings of ecumenicalism and promise financial blessings to anyone who supports their work. Tragically, they never expose the evils of false religion by name, never preach against the awfulness of sin nor do they dare speak out concerning the blatant crimes being committed by our highest officials in U.S. government...

"So, as an honest Bible preacher, obeying the plain commands of God, I must speak out against corruption and immorality. Waste, corruption, the taking away of men's freedom and the seizing of men's property, these sins every honest preacher must condemn and every honest Christian must disavow."

Meanwhile 1.3 million American citizens lost their homes to a criminal banking scam in 2007. Controlling leaders of the U.S. government deliberately allowed this to happen as a pretext to usurp control over the housing industry. This is part of the diabolic New World Order plot to socialize the United States. Socialism is simply the road to Communism. Socialism is the Devil getting his foot into your front door; Communism is when he takes over your home. Barack Obama is a rotten Communist and has vowed to implement socialist polices as U.S. President.

Here's what Dr. John R. Rice has to say about the evils of Socialism...

Obama may appear as a type of savior to the American people for a time after he takes office; but his socialist give-away programs will ultimately end in a Communist Police State, a failed economy and policies paralleling Communist China today. You can kiss your freedom goodbye. Already, American citizens are unable to find any work because criminal illegals are Taking American Jobs. It is sickening. The average pastor is a coward and doesn't care enough to address these issues...

"On moral matters where right and wrong are involved, and where the Bible clearly speaks, many preachers have so compromised and sold out, and are so afraid of their congregations, that they cannot give the clear Word of God. God pity the preacher who is afraid to preach against sin just because somebody will cry 'politics'! "

The average pastor nowadays is compromised, greedy, a coward, arrogant and self-willed, saturated with sinful pride, pompous, cocky, and apostate. It is wickedness in the highest degree!!!

The Apostate World of Pat Robertson

Pat Robertson is a professed Christian; yet he denied the Christian faith when he called Pope John Paul II a man of "profound understanding" and "deep spirituality"...

CBN.com – VIRGINIA BEACH, Va., April 02, 2005 -- I am deeply grieved as a great man passes from this world to his much deserved eternal reward. John Paul II has been the most beloved religious leader of our age – far surpassing in popular admiration the leader of any faith.

He has been a man of great warmth, profound understanding, deep spirituality, and indefatigable vigor. It was my great honor to meet with him at the residence of my good friend, Cardinal O’Connor, in New York, and to sit in the Consistory during the mass he conducted in Central Park. I told him at the time how much the American people loved him, and he merely smiled. That love was shared not only in America but by millions all over the globe.

He has been a steady bridge in the transition of Eastern Europe from communism to freedom. His personal magnetism brought together all Christians in new bonds of understanding.

I pray for the Cardinals of the Catholic Church that they might have God-given wisdom in selecting the successor to this great man. Their task will not be easy, but with God all things are possible."

The Pope is the leader of the biggest false religion in the world, Catholicism! Pope John Paul II went to Hell because he trusted upon his own self-righteousness and the Catholic Church to save him instead of Jesus Christ...

For Robertson to speak such gleaming words of praise towards such a Satanic imposter as the Pope, reveals that Robertson is in league with the Devil himself. Pat Robertson is NO Christian! BILLIONS of people are going to burn in Hell because of the Catholic religion, which falsely teaches that self-righteousness is the way to Heaven. Mark 7:7-13 and Romans 10:3,4 plainly condemn the Catholic Church as a false cult. The Bible warns us that Satan's false ministers come to us as ministers of righteousness (2nd Corinthians 11:13,14). Jesus warned us in Matthew 7:15 about wolves who would come to us in sheep's clothing speaking lies. Catholicism is straight out of the pits of Hell. 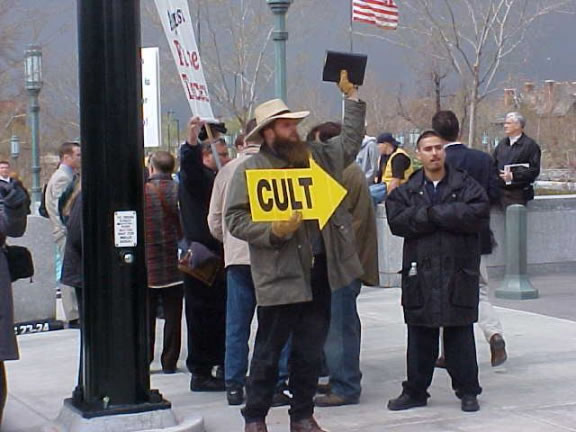 The term “Lifestyle Evangelism” applies to carnally-minded believers who make excuses to avoid their Biblical responsibility to publicly contend for the Christian faith (Jude 1:3), confront lost sinners with the Gospel of Jesus Christ (Proverb 11:30; Matthew 9:38; 2nd Corinthians 5:11) and cry aloud against the awfulness of sin in society today (Ephesians 5:11; Psalm 94:16). The basic premise of Lifestyle Evangelism is that a believer should live in such a manner that the unbelieving sinner will want what we have, i.e., Christianity; but this is NOT God's method. Acts 20:20 tells us that the Apostle Paul taught publickly, and from house to house. In John chapter 4, Jesus confronted the Samaritan women concerning her salvation.

The Bible teaches Confrontational Soulwinning! Satan loves Lifestyle Evangelism, because 95% of the people who would have been saved WON'T be saved, because no one witnessed to them directly.

Although Matthew 5:16 teaches for believers to let their light so shine before men, that they may see your good works, and glorify your Father which is in heaven; this is no way alleviates our Biblical duty to preach the Gospel and win souls to Jesus Christ. Every believer has been given the Ministry of Reconciliation.

Lifestyle Evangelism is of the Devil. It's high-time for Christian leaders to start exemplifying the Lord Jesus Christ in their life by getting angry over sin, taking a stand for righteousness and aggressively exposing false religions by name. People are dying and going to Hell. Please read, When the Gospel is Bad News. Most false religions teach the basic Gospel, but they pervert it somehow; thus, we need to explain to lost sinners that any form of self-righteousness will damn a person's soul to the Lake of Fire forever. You need HIS RIGHTEOUSNESS, i.e., the righteousness of Jesus Christ (2nd Corinthians 5:21; Matthew 6:33)

In Acts 26:28, we find Paul PERSUADING the king to get saved... "Then Agrippa said unto Paul, Almost thou persuadest me to be a Christian." Paul made an attempt, i.e., he confronted the king, to get him saved. Sadly, king Agrippa refused to repent. He rejected Jesus Christ and went to Hell. Almost is not good enough in God's eyes... "Ye must be born again" (John 3:7).

The Evils of Lifestyle Evangelism

Lifestyle Evangelism is what's wrong with America. Lost homosexuals don't want what Christians have. In fact, they detest Christianity as a whole. The abortionists don't want anything to do with the Christian Bible that condemns them as murderers (Exodus 20:13). Being nice to lost sinners isn't the Biblical way to get them saved. Please don't misunderstand me, we ought to be nice to everybody; but preaching against sin and speaking the truth is NEVER considered a nice thing to do. Some people get very angry when you speak the truth, as Michael Marcavage found out when he quoted the Bible in a city council meeting, facing up to 15-months in jail. They killed Stephen in Acts 7. They tried to kill Paul in Acts 21:31, "And as they went about to kill him..." This is what the truth does to some people. 2nd Timothy 3:12 states, "Yea, and all that will live godly in Christ Jesus shall suffer persecution." Are you being persecuted?

America is saturated with dime-a-dozens ministries that rake in millions-of-dollars in revenues annually; but they never speak out against the evils of Catholicism, or the wickedness of homosexuality, or the evils of abortion, or the crimes being committed by our government leaders. God can only truly be worshipped in truth... "God is a Spirit: and they that worship him must worship him in spirit and in truth" (John 4:24).

It is a false notion that believers must dip-their-sails in compromise in order to win the unsaved to Christ. If God doesn't apologize for His Word, then why should we? The Bible is brutally honest and extremely offensive to many people, which is why It is so hated throughout the world today. After reading the Bible, famous author Mark Twain said, "If there is a God, He is a malign thug." The Bible offends people and rightfully so.

This is why so many dishonest and heathen Bible publishers (like Zondervan and Nelson) have rewritten God's Word, diminishing it's condemnation against sin, and diluting Scriptural passages proclaiming the deity of Jesus Christ and the Godhead. They are in serious trouble with God (Deuteronomy 4:2). Mankind by nature is rebellious and hateful against God (Ephesians 2:1-3).

Lifestyle Evangelism is rooted in the love of money (1st Timothy 6:10). Evangelists and pastors today are afraid to rock-the-boat, stir-the-pot and ruffle-the-feathers lest they lose financial support. It is apostasy! We need some men of God in America to flip the boat over, jump into the pot and pluck some feathers!!!

“Cry aloud, spare not, lift up thy voice like a trumpet, and shew my people their transgression...” —Isaiah 58:1