RIGHT: The photo to the right was taken through a special filter in a dark room shows a cat, left, possessing a red fluorescent protein that makes the animal glow in the dark when exposed to ultraviolet rays. It appears next to a normal cloned cat.

Three Turkish Angora cats were born in January and February through cloning with a gene that produces a red fluorescent protein that makes them glow in dark. One died at birth, but the two others survived, the ministry said.

The ministry claimed it was the first time cats with modified genes have been cloned.

The development means other genes can also be inserted in the course of cloning, paving the way for producing lab cats with genetic diseases, including those of humans, to help develop new treatments, the ministry said.

"Cats have similar genes to those of humans," said veterinary professor Kong Il-keun of Gyeongsang National University. "We can make genetically modified cats that can be used to develop new cures for genetic diseases."

Keitaro Kato, a geneticist at Kinki University in western Japan who has cloned fish, said the research could be significant if it eventually helps treat people with hereditary diseases.

"People with genetic disorders usually have to receive treatment throughout their lives that is very hard on them," Kato said. "If these results can help to make their lives easier, then I think it's a wonderful thing."

South Korea's scientific reputation suffered a heavy blow after much-hailed stem-cell breakthroughs by scientist Hwang Woo-suk were found to be faked in late 2005. He remains on trial on fraud and other charges. 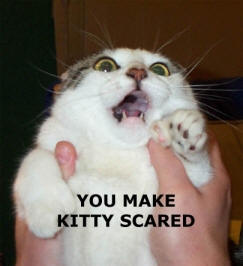 A genetics nightmare is coming!

Glow-in-the-dark humans are just around the corner...

A genetically grown mouse with an Human Ear. This is getting freaky folks!

The Word of God tells us that God created life to reproduce "after his kind," i.e., within its own species. God never intended for mad scientists to generate chimeras (i.e., half animal/half human mutant creatures) in labs. Where will this tampering with life lead? What will be the moral repercussions? Life today has been reduced to nothing―to the point where a growing child in a mother's womb has no right to life.

All life comes from God, and should be respected as such. Although the idea of growing human organs in animals is challenging and revolutionary, it also violates the most basic LAWS OF NATURE which God incorporated into the universe. To what degree does the end justify the means?  This is an important question. If mankind has a right to produce chimeras, then to what degree does he have a right to go... 25% human? ... 50% human ... 75% human? Man's unquenchable thirst for madness will be his eventual doom. END

Human Cows! (The world's first human clone of an adult has now been made!)

Transgenic Sheep (Scientists have created the world’s first human-sheep chimera, which has the body of a sheep and half-human organs.  The sheep have 15 per cent human cells and 85 per cent animal cells!)

End Of The World?

This will be every transgenic cat's dream, glow in the dark mice. Don't think for one moment that fluorescent humans aren't around the corner, mark my words... you'll see it, along with spider humans and every other Godless monstrosity of mad scientists. Man's good intentions are often a Pandora's box. Even so, come, Lord Jesus!