Martial law is when the military police take over local law enforcement.  This is when the federal government imposes their will upon the state governments.  The term "martial law" should sound scary because it means the loss of our liberties.  Of course, the government would lead us to believe that "national security" is for our own good and protection.  However, our own government's history should lead us to believe otherwise.  There were at least ten advance warnings to The White House the week prior to the bombing of Pearl Harbor.  Top leaders within our own government allowed the bombing of Pearl Harbor and the murder of thousands of young men.  This justified the U.S. joining the World War.

The Northwood documents from 1962 reveal today that U.S. military officials were actually planning to shoot down a U.S. commercial jet with citizens on board or explode a U.S. ship.  This was intended to anger the American people and justify the U.S. involvement in the Cuba conflict.

Before AIDS suddenly appeared in the 1980's, U.S. military officials had been requesting the need to develop a new biological weapon as early as the late 1960's.  They wanted to create a virus cancer.  Military scientists working alongside with cancer scientists developed such a weapon.  AIDS first appeared amongst homosexuals in New York city after a year-long series of Hepatitis vaccinations.  Africa was hard hit with AIDS as well.  Doesn't it seem strange to you that AIDS just popped up from nowhere?  It was created by the U.S. military.

I could go on and on about these things.  The fact that our government would even create something as diabolical as Operation Garden Plot is extremely alarming.  This program was developed during the Reagan administration as a means to imprison Americans in internment camps when civil war breaks out.  I say "when," not "if."  I'm surprised civil war hasn't broke out yet because of the Social Security scandal alone.  Trillions of dollars have disappeared within our own government, never to be recovered or accounted for.  Americans are already so weak and defeated that our government is getting away with these crimes and nothing can be done about it.  All of the watchdog groups are making little impact.  The average American citizen has become so complacent and indifferent that he or she doesn't really care anymore.  It's been said, "The greatest problem in America is apathy, but who cares?" 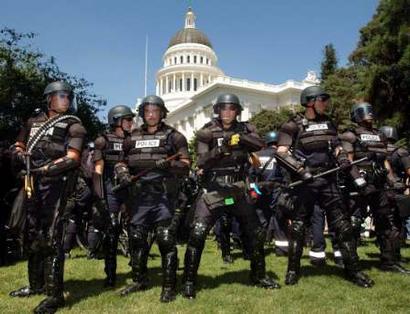 Yes, martial law is coming friend.  The U.S. government will use brainwashed young people to do their dirty work.  Don't be surprised though when it's foreign soldiers in your face.  Foreign troops have been training on American soil for many years now.  The New World Order is already here.  The microchip technology is here.  Did you know that they can inject a microchip in you now using a syringe?  It's smaller than you can see with built in nanotechnology.  The chip can contains tons of information about you.  It's going to be mandatory in our prisons.   Every prisoner WILL be micro chipped like an animal, like it or not.  I believe that we're seeing the beginning of the end folks.  With all the nuclear bombs floating around this world...it's just a matter of "when."  I'm not happy about this, but this is the truth as I see it.

Martial law will means the loss of our freedoms.  There will be NO Bill of Rights.  You will lose your rights.  Even General Tommy Franks has said that the U.S. Constitution WILL be suspended if there is a terrorist attack in the United States.  This is no conspiracy theory friend, I wish it were.  This is reality!

I've shared with you some grave concerns I have over our freedoms.  I have done much reading, yet have only scratched the surface of the evil that is plaguing our once great nation.  Maybe we can't change the world like we want to, but we can allow God to change us.  Let me ask you a personal question because I care about you as a person...Do you know for sure that if you died right now that you would go to heaven?

Do you know 100% sure?  If not, I can tell you in less than one minute how to be saved.  It's so simple.  First, you must realize and admit to God that you are a sinner, deserving of hell.  If you believe you're a sinner, but don't deserve to go to hell, than why would you need a Saviour?  If you compare yourself to the eternal holy Word of God, you will see your sinfulness.  Don't compare yourself to others, compare your self with the Bible.  Yes, you are a horrible sinner my friend.  You deserve to burn in hell.  So do I.  So does the Pope.  So does everyone.  But the good news is that God came to this world as a man, Jesus Christ, and gave His life upon the cross to pay for your sins.  Jesus shed His precious blood to wash our sins away.  Christ died, was buried, and rose again three days later.  This is the gospel, the good news.  We don't have to go to hell.   If you believe that Jesus died for your sins, then all you need to do is to go to Jesus and ask Him to forgive you.  If you'd like to be saved now, then pray something like this...

Dear Jesus, I know that I am a sinner, deserving of hell.  I believe that you shed your blood and died upon the cross for my sins.  I now ask you to forgive all my sins and to take me to heaven when I die.  Please come into my heart as my personal Saviour.  Thank you for saving me, Amen

God bless you and thank you for reading this article,

New Tools for the Police State

From Tommy Franks, a doomsday scenario

The US military: A creeping civilian mission

Americans are Being Brainwashed 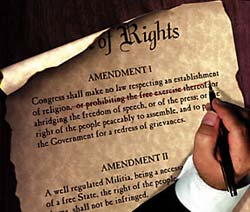