Reclaiming the Rainbow for God!

Instead of singing hymns, this is the music that ought to be played in homosexual churches!

The photo below appeared in the May 31, 2004 Chicago Sun-Times newspaper. Notice the rainbow sashes that these Sodomite men are wearing. I would like to say a few words about this. 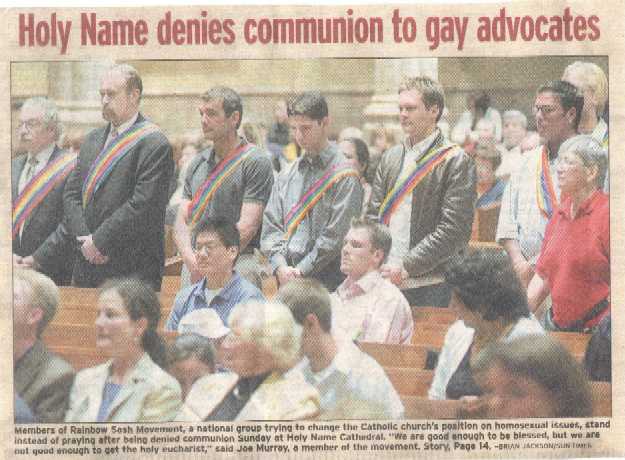 I am always deeply grieved (as I know the Holy Spirit of God is) when I see the rainbow desecrated by some Godless Sodomites. I do not call them “homosexuals,” simply because that is what they like to be called. I surely do not call them “gay” because they are not a happy bunch in the eyes of God. Though some would dare to call them “queers” or “faggots,” I prefer to call them what God calls them... “SODOMITES.” Thus named after the wicked city of Sodom which was destroyed by fire and brimstone in the Old Testament.

“Even as Sodom and Gomorrha, and the cities about them in like manner, giving themselves over to fornication, and going after strange flesh, are set forth for an example, suffering the vengeance of eternal fire.” —Jude 1:7

Sodom was destroyed by God Almighty as an EXAMPLE to those who would live ungodly.

“And likewise also the men, leaving the natural use of the woman, burned in their lust one toward another; men with men working that which is unseemly, and receiving in themselves that recompence of their error which was meet.  And even as they did not like to retain God in their knowledge, God gave them over to a reprobate mind, to do those things which are not convenient; Being filled with all unrighteousness, fornication, wickedness, covetousness, maliciousness; full of envy, murder, debate, deceit, malignity; whisperers, Backbiters, haters of God, despiteful, proud, boasters, inventors of evil things, disobedient to parents, Without understanding, covenantbreakers, without natural affection, implacable, unmerciful: Who knowing the judgment of God, that they which commit such things are worthy of death, not only do the same, but have pleasure in them that do them.” —Romans 1:27-32

Need I say more... the Word of God speaks for itself. Homosexuality is a wicked sin.

Most people think that the rainbow is only a token from God that He would never destroy the earth again with water.  Even though this is very true, the rainbow means more. The rainbow is a reminder to all humanity that GOD KEEPS HIS PROMISES! We read in Titus 1:2 that God cannot lie. Any time you see a rainbow, you remember that God keeps His Word. This is the beauty of the Word of God... It is filled with thousands of promises from God.

It is sickening that the Sodomites would dare desecrate such a holy object as the rainbow with their wickedness. God will hold each and every one of them accountable. The rainbow is God's gift to humanity... NOT the sodomites. They have no claims to the rainbow (or the once decent word "gay"). There is nothing "gay" about the sodomites. So the next time you see a rainbow in the sky, think about the fact that God never lies! God has promised that the unrighteous will burn in hell (Psalm 9:17). Sodomites can desecrate the rainbow, but they can never change it's TRUE meaning!

By the way, the Bible never calls the rainbow a “rain bow”; but rather, it is God's bow. Amen!

Listen friend, did you know that God has made a way for you and I to go to Heaven? God has made us each a promise concerning salvation (Romans 10:13). If you are a homosexual reading this article, God loves you and wants to forgive you! Jesus promised that He would not cast away anyone who comes to Him (John 6:37). God promises to forgive you if you'll simply come to Him as a repentant sinner, that is, admit that you are a sinner (1st John 1:9). The gospel is not good news to be achieved; but rather, received to be believed. If you'd like to learn more about to be saved, Click Here.

The Morally Reprehensible Sin of Homosexuality

There is no sin any more indicative of a societies' spiritually apostate condition than homosexuality (Romans 1:22-32). Homosexuality (called "sodomy" in the Old Testament) was a crime punishable by death in ancient Israel (Leviticus 20:13). One of the sins for which God destroyed Sodom and Gomorrah was homosexuality (Genesis 19:1-10). Tragically, the Devil's children are even forcing the homosexual agenda on Christian children in public schools. This is evil. If you can't afford a private school, then you are legally required to enroll your child into a public school which is going to homosexualize them...

A federal judge in Massachusetts has ordered the "gay" agenda taught to Christians who attend a public school in Massachusetts, finding that they need the teachings to be "engaged and productive citizens."

U.S. District Judge Mark L. Wolf yesterday dismissed a civil rights lawsuit brought by David Parker, ordering that it is reasonable, indeed there is an obligation, for public schools to teach young children to accept and endorse homosexuality.

Wolf essentially adopted the reasoning in a brief submitted by a number of homosexual-advocacy groups, who said "the rights of religious freedom and parental control over the upbringing of children … would undermine teaching and learning…"

God doesn't have to damn America, because we are doing it to ourselves. As a result of removing God, prayer and the Bible from the school system in the 1960's, today's generation sees no immorality in abortion, drunkenness, gambling, fornication, Rock 'N' Roll, immodest dress, or promiscuity. And now homosexuality is being taught as a legitimate way of living, and a "right" to be enforced. No Sir! Homosexuals are the filth of any society and such shameful living ought to be shunned by every Christian, Christian group and Christian organizations. END

Why does the “mainstream press” condemn the Catholic Church for allowing predatory homosexuals to destroy the lives of boys, while simultaneously condemning the Boy Scouts of America for not allowing precisely the same thing in their organization? —SOURCE

Why Can't My Daddies Marry?

*While homosexuals claim they make up 10% of the population, the reality is closer to 1-2%!

(Provides a brief history of the homosexual movement in the U.S. and its roots in Marxist ideology.  This paper describes how homosexuals terrorized the psychiatric community and have created a marketing strategy to vilify their opponents.)

Let the truth be known... homosexuality is a menace to society and undermines the moral integrity of a nation.  God will not be mocked!  Homosexual lust is not love.  In Romans 1:26, God calls such lusts, "vile affections."  "Vile" means "morally reprehensible."  Homosexual affections are MORALLY REPREHENSIBLE!  If Rosie O'Donnell wants to label Christians like me as "radical" because we believe the Word of God, then I'm proud to be radical for my Lord.  O'Donnell wouldn't be calling Christ-honoring Christians "radical" if it weren't for the compromised, weak, cowardly, carnal, apostate, so-called "Christians" who have become homo-friendly.  Did you know that Christianity Today is homosexual-friendly?  Christianity Today teaches teens that it's "normal" to be confused about sexual feelings, and that "Some same-sex activity or experimentation does not automatically mean that you are gay."  Can you believe what you are reading... this is from Christianity Today!!!  Why should God have mercy on this wicked nation?  I believe God says to men of God today, the same Words He spoke to Jeremiah concerning Israel...  "Therefore pray not thou for this people, neither lift up cry nor prayer for them, neither make intercession to me: for I will not hear thee" (Jeremiah 7:16).

Do Something About the Homosexual Movement and Pedophilia!

This is NOT a Hate Site!

Romans 1:26-27 and 32, “For this cause God gave them up unto vile affections: for even their women did change the natural use into that which is against nature: And likewise also the men, leaving the natural use of the woman, burned in their lust one toward another; men with men working that which is unseemly, and receiving in themselves that recompence of their error which was meet. ...Who knowing the judgment of God, that they which commit such things are worthy of death, not only do the same, but have pleasure in them that do them.”

I do NOT condone hatred toward anyone. In fact, the Bible never directs us to hate anyone (not even the Devil). However, the Bible does teach us to hate evil (Psalm 97:10). The Word of God clearly teaches in Romans 1:26-32 that homosexuality is a horrible sin. According to 1st Corinthians 6:9-10, homosexuals will not be allowed into Heaven. For that matter, no unsaved sinners will be allowed into Heaven. The only hope is through the blood of Jesus Christ which washes our sins away (Colossians 1:14). I do NOT seek to be unkind to anyone, but the Word of God is not going to change (Matthew 5:18). Sodomy (the Bible's term for homosexuality) is sinful in God's eyes! If you don't like it, then get mad at God.

“Wherefore God also gave them up to uncleanness through the lusts of their own hearts, to dishonour their own bodies between themselves: Who changed the truth of God into a lie...” —Romans 1:24-25

Have you believed a lie? Please do not be deceived my friend... homosexuality is a wicked sin that will bring the judgment of God upon you. If you are a homosexual, I do not hate you at all. In fact, I care about you very much, which is why I made this webpage. This webpage isn't intended to make you mad or hurt your feelings (although the truth usually does step on people's toes), it is intended to open your eyes to the truth about homosexuality and to enlighten you concerning the solid Biblical warning against those who would commit homosexuality (or any sin).

The proper way for you to deal with your homosexuality is to face it for what it is... sin. Ask God to forgive you and to help deliver you from the sin of homosexuality. Jesus did not come into the world to condemn you, and neither should anyone else; but the Bible does condemn all of us as horrible sinners (Romans 3:10.23).  Jesus came to SAVE SINNERS, not to condemn anyone (John 3:16-17). I'll close with the beautiful Words of the Saviour spoken to the woman accused of adultery by the hypocritical religious scribes and Pharisees...

“When Jesus had lifted up himself, and saw none but the woman, he said unto her, Woman, where are those thine accusers? hath no man condemned thee?  She said, No man, Lord. And Jesus said unto her, Neither do I condemn thee: go, and sin no more.” —John 8:10-11

I love you all in the Lord whoever you may be. Jesus Christ wants to forgive and save you, won't you please BELIEVE THE GOSPEL NOW.