One of The Council On Foreign Relations symbols features a man naked on a white stead giving the horned hand signal.

Above and below left, Cher 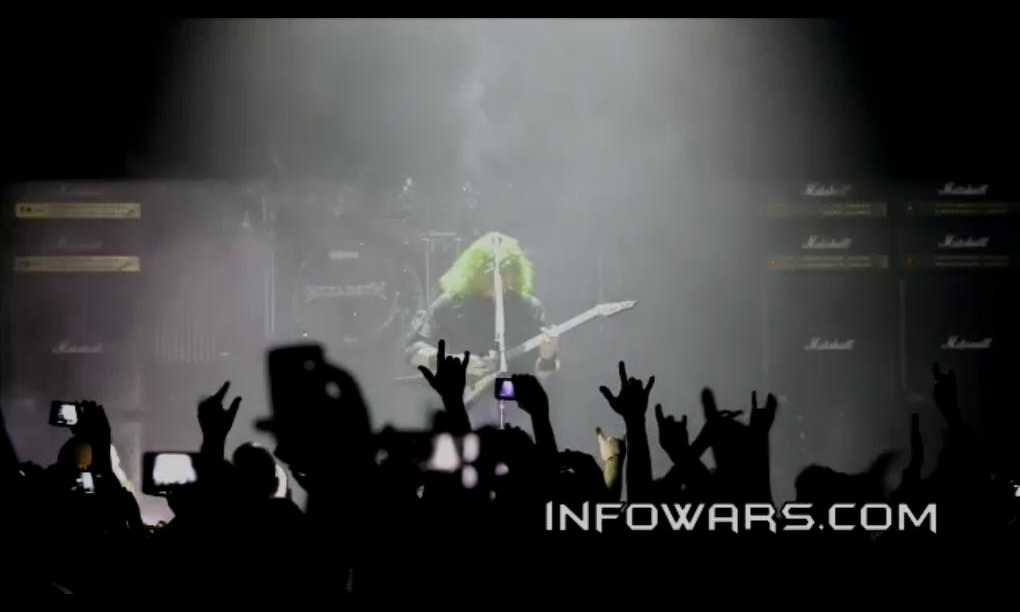 ABOVE: Dave Mustaine of the satanic Heavy Metal band MEGADETH. This image appeared in an interview with Dave Mustaine by Alex Jones, on the March 15, 2012 NIGHTLY NEWS show. Clearly the fans of MEGADETH are worshippers of Satan (notice all the “I LOVE SATAN” signs)!

Despite professing on the Alex Jones Show in 2009 that he recently became a born-again Christian, Dave Mustaine still performs with MEGADETH (he basically is the band, since he writes, sings and performs all the songs). Mustang produced a satanic tribute album titled "Th1rt3en" in November of 2011. Mustaine downplayed it as just being his favorite number. Take a look at the album cover of the Heavy Metal band, SACRAMENTUM, which features the song "13 CANDLES." Who does Mustaine think he's kidding? Bathory is another name for Baphomet.

Britney Spears Makes Devil Horns in a Glee Advertisement. It's all a big joke to the world. As of February 2011, Spears has employed the Satanist director Jonas Akerlund to film the video for her new number one song “Hold It Against Me” and has released clips of the video via Twitter. Well, God will hold her wickedness against her on judgment day (Ecclesiastes 12:7,14).

It was named after the Hungarian Countess Elizabeth Bathory who was the most prolific female serial killer in Earth’s history and sexually molested and murdered over 600 young women and children to bathe in their blood to obtain “eternal youth.” One of the band’s many Satanic songs is “Satan My Master.” It seems Akerlund is aiding the major music industry to help brainwash people into accepting the corruption of the New World Order Illuminati. Britney Spears' album Femme Fatale is scheduled for retail release on March 15. SOURCE

ABOVE LEFT: Enlarged picture taken from the back cover of the Eagle's 'Hotel California' album cover (pictured below). Photo shows Anton LaVey, founder of the 'Church of Satan,' looking down from a balcony in the Hotel California. ABOVE RIGHT: Anton LaVey

ABOVE: Despite all the denial of claims that the 'Hotel California' refers to the Church of Satan, consider that The Eagles manager, Larry Salter, admitted in the Waco Tribune-Herald (February 28, 1982), that the Eagles were involved with the Church of Satan! Not surprisingly, one of the Eagles' songs is titled “Have A Good Day in Hell.” Check out this creepy information about 'The Eagles.'

Bill Mayer Flashing a Satan Sign Immediately After Saying That He Has a Problem With All Religions (see 1:23 in video). Evidently Bill Mayer doesn't have a problem with worshipping Satan!

Oh, listen my friend, you need the righteousness of Jesus Christ! This sin-cursed world hates Jesus Christ with a passion and curses His very name. How many more signs of Satan do you need to see to realize that Satan is in control of this world (2nd Corinthians 4:4). Consider that the publishing company for the United Nations was founded in 1922 as The Lucifer Trust, today known as The Lucis Trust.

Consider the occult connection between all of America's mainstream religions. Consider the occult symbols saturating Washington D.C. Consider empty seat # 666 in the European Union. Consider that a modern Tower of Babel has been built, and now their working on the city. Truth is certainly stranger than fiction. Won't you receive Jesus Christ now as your personal Savior to forgive your sins? John 1:12, “But as many as received Him, to them gave He power to become the sons of God, even to them that believe on His name. END