I think just about everyone is familiar with the fictional character, Superman, who states that it is his job to fight “The never ending battle for truth, justice, and the American way.” What exactly is the "American way"? Country singer and admitted white trash, Toby Keith, sings in his song, Courtesy Of The Red, White, And Blue...

Hey Uncle Sam
Put your name at the top of his list
And the Statue of Liberty
Started shakin’ her fist
And the eagle will fly
Man, it’s gonna be hell
When you hear Mother Freedom
Start ringin’ her bell
And it feels like the whole wide world is raining down on you
Brought to you Courtesy of the Red White and Blue

Justice will be served
And the battle will rage
This big dog will fight
When you rattle his cage
And you’ll be sorry that you messed with
The U.S. of A.
`Cause we'll put a boot in your ass
It's the American way 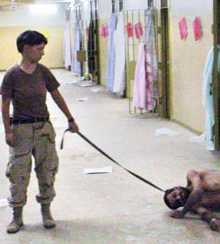 So according to Toby Keith, tyranny is the American way? Mr. Keith states that it's the American way to react to half-baked lies and misinformation with brutal force, violence, and the merciless torturing of innocent people. Who do we think we are in America?  It's tragic that the average American has their head buried in the sand, and is willingly ignorant concerning the overwhelming amount of concrete evidence surrounding the 911 attacks.

Only a blind fool would blame the Muslims for the 911 attacks. The Bush administration orchestrated the 911 attacks, with help from the Saudi Arabian Bin Laden family and others. Do you not realize that the U.S. invaded Iraq on the GROUNDS of alleged Weapons of Mass Destruction? The WMD's were NEVER found... so why did we continue to invade and conquer Iraq? It's because we have become a ruthless, cut-throat, we'll-do-as-we-please, type of nation—who spits on truth and justice... IT'S THE AMERICAN WAY! The American way is now the ruthless way, the lying way, and the heathen way.

Americans turn their radio up to hear Toby Keith sing about the American way, while guzzling their booze so they can go kill someone with their car. America is sinfully proud, a nation of pleasure-seekers, who have disregarded God's Word, and sought out false prophets... "For the time will come when they will not endure sound doctrine; but after their own lusts shall they heap to themselves teachers, having itching ears" (2nd Timothy 4:3).

People have become INTOLERANT to the truth. A preacher can't make it big nowadays unless he dips-his-sails, trims his message, caters to feminists and abortionists, and steers clear of all controversial issues. Take pastor Lon Solomon for example, who states that abortion is only a "minor concern" in his mega church of 10,000 people every Sunday. Sellout! The American way is a sinful way.

According to presidential hopeful, Mitt Romney (R-Massachusetts), gay couples raising kids is the American way. Apparently, while in New Hampshire, Romney was confronted by an openly gay women who was disturbed by the former governor’s position on gay marriage. Romney responded...

“There are other ways to raise kids that’s fine: single moms, grandparents raising kids, gay couples raising kids. That’s the American way, to have people have their freedom of choice.” —SOURCE

Choice? Do the children have a choice?  Every child deserves to have a father and a mother. The entire concept of two lesbians trying to raise a child without a father in the home is INSANITY!!! Are you listening Rosie O'Donnell? Rosie O'Donnell is a disgrace to America, and has attacked Bible-believing Christians, categorizing them with terrorists. How can anyone in their right mind claim that it's the American way to murder children by abortion, allow lesbians to raise children, and utilize fertility clinics to allow homosexuals to have lab babies? Americans have gone insane!

Yet, we foolishly wonder why our nation is spiraling downward. Sin always undermines any nation! America is fast-becoming a large insane asylum, actually making Sodom and Gomorrah look like nice places to live. Jesus said that Sodom would have repented; BUT not America! We Americans have become so calloused towards sin that we've even named one of our biggest cities—SIN CITY! Tragically, millions of Americans flock to Las Vegas regularly to commit sin. Don't be deceived... What HAPPENS in Vegas is RECORDED in Heaven!

Our days are numbered as a free nation if we continue living in sin. We are a nation of rebels. While skilled surgeons spend dozens of hours trying to save one babies' life—millions of other babies are brutally and deliberately murdered by the same medical profession. While America's school children are being taught by the “experts” that there is no God, and that we all evolved from slime—the same “experts” are trying to figure out why society is so messed up, people are depressed, and crime happens. Duh!

I mean, we kicked God, prayer, and the Bible out of our public schools in 1962/63, and now the “experts” are scratching their heads, trying to figure out why America is spiraling downward into ruin?  We hypocritically claim to be a nation that TRUSTS IN GOD; while LEGALLY allowing abortion, gay marriages, and even the adoption of children to be raised by lesbians! We may trust in greed or goods; but certainly NOT in the God of the Bible.

The American way is nothing to be proud of, for we have shamed the name of decency. America produces more pornographic smut than any other nation on earth—LEGALLY. Victoria's Secret is NO SECRET! It's vile filth and lasciviousness. Advertisers will stoop lower than low to sell a product, even if it means corrupting society. Woe unto America. Shows such as Desperate Housewives are nothing less than a total mockery of God's command not to commit adultery.

We are a spiritually sick nation. Heehaw is one of the most Godless and evil TV shows ever produced, honoring Hugh Hefner, displaying their Heehaw honeys (half naked whores), and causing sinful lasciviousness in the hearts of men. And then they end each show with, get this, a Gospel song. Hypocrites! They honor God with their mouths; but their heart is far from Him (Matthew 15:8). Carrie Underwood sings Jesus Take The Wheel; but then she is featured in SELF-MAGAZINE. This is the American way—say you trust in God and love Jesus; but then live selfishly, sinfully, and sensually. Woe unto America!

Hugh Hefner has been a strong advocate of same-sex rights for homosexual perverts. Sodomy (homosexuality) is a sin, not a right.

I am not trying to be unkind toward anyone. We ought not become gay-bashers, but we should preach the truth. If you are a homosexual, I can tell you assuredly that God loves you more than you could ever imagine (John 3:16; 1st John 3:16). Jesus died for THE UNGODLY (Romans 4:5) which includes myself, and every person in this world. Jesus only died for ungodly sinners like you and me. We are saved by Christ's imputed righteousness, which is why even the vilest of sinners can be saved by simple trusting-faith in Jesus as the Christ, the Son of God (John 20:31). END

Ye Must Be Born Again! | You Need HIS RIGHTEOUSNESS!