Serving the Devil in Jesus' Name

"...his mother said, I had wholly dedicated the silver unto the Lord from my hand for my son, to make a graven image and a molten image..." -Judges 17:3 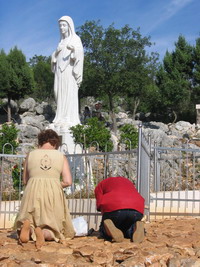 We read in Judges 17 about a religious man, Micah, and his mother (unnamed).  Judges 17:3 is a startling Scripture.  Micah and his mother sincerely believed they were serving the Lord by committing idolatry.  This is true of so many people today.  The Catholic religion is saturated with graven images and idolatry.  Hundreds-of-millions of people give their money to the Catholic Church, thinking they are serving Jesus Christ; but in reality, they are serving the Devil through idolatry.  Micah's mother was dedicating the money to the Lord but using it to make an idol!  She had wholly dedicated that money to the Lord to make a graven image and a molten image.  You see, they have gone off into idolatry!  I believe Micah's mother was very sincere; but deadly wrong (Proverb 14:12).  Idolatry is a horrible sin--the Bible even forbids BOWING to statues (Exodus 20:4,5).

So many people today THINK they are doing something good for the Lord; but they are actually doing it for the Devil.  All of the money given to the Catholic Church is helping the Devil send more souls into Hell.  Instead of worshipping the True and Living God (John 4:24); Catholics worship a false god that allows Mary worship, veneration of the dead, works salvation, etc.  Jesus plainly stated in Mark 7:8,9... "For laying aside the commandment of God, ye hold the tradition of men, as the washing of pots and cups: and many other such like things ye do.  Full well ye reject the commandment of God, that ye may keep your own tradition."  Notice that Jesus emphasized YOUR TRADITIONS.  This is in sharp contrast to the Biblical traditions mentioned in 2nd Thessalonians 2:15, "Therefore, brethren, stand fast, and hold the traditions which ye have been taught, whether by word, or our epistle."  The Vatican attempts to justify their MANMADE traditions with such Scriptures.  Clearly, Jesus condemned manmade traditions.  So the big question then is... how can we decipher men's traditions from those received from God?  The answer is simple... THE WORD OF GOD!  Any tradition which men teach that goes contrary to God's Word is a LIE.

A good example is The Assumption of Mary, added to Roman Catholicism's official dogma in 1950 by Pope Pius XII.  There's not one Scripture teaching that Mary was assumed bodily into Heaven (as was Christ).  In fact, the Bible teaches that all humanity is sinful (Romans 3:10).  Mary was a sinner, deserving of Hell-fire!  The Bible teaches that all men must die (Hebrews 9:27).  Where do Catholics come up with their insane teachings?  From pagan Babylon, that's where!  Catholics even go as far as to claim that Mary was a "Perpetual Virgin," again, nowhere taught in the Word of God.  In fact, Mark 6:3 clearly states that Mary had children.  Catholics deceitfully try to claim that the Bible was referring to a different Mary.  Yet, why would Joseph still be living with Mary 12 years after Jesus' birth if they were not being intimate (Luke 2:41,42)?  How far will the Catholics go to justify their false doctrines?  I'll tell you how far... they've even removed the 2nd of the Ten Commandments, and split the 10th into two to hide their dastardly evil.  Should it be surprising that 783 new sex abuse claims were made against the Catholic Organization in 2005 alone?  And now the Vatican is allowing homosexual priests, i.e., just so long as they haven't practiced it in the past 3-years.  Why would anyone with a brain the size of an ant want to be a part of such a vile, heathen, godless, sexually-perverted, religion whose priests are saturated with sin?  Why would anyone want to be brainwashed with religion instead of the Word of God?  It's because people are looking for someone to structure their lives.  From the cradle to the casket, Catholicism has a package (at a cost of course).  Sadly, Catholicism is a prisonhouse of religion!  They have churchianity without Christianity, and religion without Truth.

Micah's mother sincerely thought she was wholly committing her money to the Lord; but it was going to the Devil.  Micah and his mother were utter fools.  They truly thought they were doing the right thing by building a house of idolatry...

Micah had a house of gods.  His mother provided the silver for the idols, and Micah provided a shrine for them.  They sincerely thought they were doing this for the Lord.  This is so evil.  We see the same thing today in America.  People are so blinded by sinful pride, arrogance, and love for sin.  Increasingly, as America turns apostate, we are seeing professed "Christians" who claim that God approves of their idolatry, fornication, homosexuality, abortion, feminism, witchcraft, public nudity, gambling, boozing, pornography, covetousness--you name it!  The Old Testament Jews did the exact same thing (Jeremiah 7:9,10).

You know, there are also a lot of professed Christians today who are just that inconsistent.  Many groups take up an offering and say it is for the Lord, then use most of it for the church social gathering on Saturday night.  They say the money is dedicated to the Lord, but actually it is honoring the god of pleasure.  Churches are accountable to God for EVERY PENNY they receive in donations--it is GOD'S MONEY!  What are you doing with God's money?  I knew a pastor who used donations to his church to have pins stripes, runners, dual spotlights, and several others items added to his ministries' van.  Something's wrong with that folks.  That same pastor liked cameras, and used church contributions to buy an antique German camera for $800.  You see, he was spending the churches' money as if it were his own.

Televangelists are the worst, because they receive the most money.  James Robison took in over 50,000,000 last year; but refuses to disclose his personal compensations to the BBB.  I wouldn't give you a dime for any of the televangelists on TV today.  Pat Roberson's 700 Club is of the Devil, which takes in over $100,000,000 a year.  Pat Roberson said Pope John Paul II is, "a man of great warmth, profound understanding, deep spirituality, and indefatigable vigor. It was my great honor to meet with him..."  No Christian who loves the Lord Jesus Christ would honor such a heretic as the Pope, who teaches that Mary was without sin.  Televangelist's ONLY concern is to make money.  Everything else is for show.

Don't be a fool with the money God has given you!  It would be a wonderful thing if MOST Christians stopped tithing in America!  Why?  It's because most of our churches are a disgrace to the name of Christ.  The average pastor is far from God in his personal walk, with little concern for the souls of men.  The average pastor is more concerned about keeping the money coming into the church coffers than he is about preaching against sin, exposing evil, and contending for the faith.  Just as Micah and his mother, they are inconsistent.  They say they are serving the Lord, but they are serving themselves... "For they that are such serve not our Lord Jesus Christ, but their own belly; and by good words and fair speeches deceive the hearts of the simple" (Romans 16:18).

It's tragic that so many people are headed for destruction, but with good intentions.  The road to Hell is always paved with good intentions.  We read in Matthew 7:13-15... "Enter ye in at the strait gate: for wide is the gate, and broad is the way, that leadeth to destruction, and many there be which go in thereat: Because strait is the gate, and narrow is the way, which leadeth unto life, and few there be that find it.  Beware of false prophets..."  Ironically, the very same people who read these Scriptures continue to worship idols, while claiming to serve the God of the Bible.  This is a great deception of Satan (2nd Corinthians 11:13,14).  Jesus will say to them on judgment day, "Many will say to me in that day, Lord, Lord, have we not prophesied in thy name? and in thy name have cast out devils? and in thy name done many wonderful works?  And then will I profess unto them, I never knew you: depart from me, ye that work iniquity."