On May 3rd, 2007 George W. Bush made a commemorative speech addressing the National Day of Prayer.  Following is a portion of Mr. Bush's speech...

It's the duty of all nations to acknowledge the providence of Almighty God, to obey his will, to be grateful for his benefits, and to humbly implore his protection and favor." It's interesting that the first President said those words.

For two centuries, Americans have answered this call to prayer. We're a prayerful nation. I believe that makes us a strong nation. Each day, millions of our citizens approach our Maker. We pray as congregations in churches and in synagogues, and mosques, and in temples. We welcome people of all faiths into the United States of America.

What many people don't know is that President Bush has a speech writer that prepares all of his public speeches.  There is no day in America as hypocritical as our National Day of Prayer.  Notice what Bush stated in the above quote... "It's the duty of all nations to acknowledge the providence of Almighty God, to obey his will..."  Exodus 20:13 commands us not to kill.  Are we obeying the will of Almighty God when our nation murders 48,000,000 babies through abortion?  Or how about the 655,000 Murdered Iraqis?  President Bush further states in his speech that it is our duty as Americans "to be grateful for his benefits, and to humbly implore his protection and favor."  Carefully notice that The White House's website fails to capitalize "his" when referring to God. Typo? 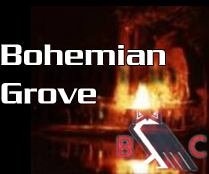 America has forsaken God.  President Bush proclaims that it is our duty to implore his protection and favor.  Again, notice the lower case "his," as if to implore the god of this world--SATAN!  Don't believe it? ... then you need to see and hear a Bohemian Grove ceremony.  President George W. Bush and his father are both members of this demonic occult group in San Francisco, and meet annually to worship Satan (via a 40-foot owl).  At these meetings, a human being is sacrificed and burned in effigy to the owl god.  This is creepy folks.  Don't let the lying propaganda fool you, our nation's top leaders have sold out to spiritual wickedness in high places.

Mr. Bush goes on to state, "We're a prayerful nation. I believe that makes us a strong nation."  We're also an adulterous nation, and a naked nation, where most of our women dress likes whores.  Pants on a woman cause men to lust.  The same feminist women that scoff in laugher at such notions are the same women who are guilty of fornication and abortion.  Bush states that we are a strong nation... but are we?  Our dollar has lost one-third of it's value since the year 2,000.  Our borders have remained wide-open for decades, and now millions of illegal immigrants are forcing our hospitals into bankruptcy, destroying our economy, and raising the crime rate.  Our public school are in shambles.  Our federal government has plunged us $10,000,000,000,000 into massive debt.  Strong nation?  Our economy is being hollowed-out by criminals working within our government.  We are a nation of pornographers, perverts, and partiers.  We are in big trouble with God.

You can talk to 10 different people in America about God, and you'll get 10 totally different images of God.  New Agers see God as an energy force that exists in all life.  Jehovah's Witnesses and Mormons don't recognize Jesus Christ as God Almighty at all.  The Bible declares that Jesus is God Almighty (John 1:1-3,14; 10-33; Colossians 2:9; 1st Timothy 3:16; Revelation 1:8).  Wiccan witches don't recognize the God of the Bible.  Judaizers today still reject Jesus Christ, as they did 2,000 years ago.  Catholics idolize Mary--reciting the Rosary to her, bowing to her, and adoring her--while hypocritically denying that they worship her.  Most Americans are Catholic, which is a false religion of idol worship and manmade heresies.  Oh that people would listen to the Word of God!  We don't obey God's will, and we haven't for a very long time.  President Bush ended his commemoration speech with the age old phrase... God bless America.  But I ask you... "Why should God bless this sinful nation?"  Our nation's National Day of Prayer is not to the God of the Bible in most cases; but rather, it is a day of prayer to Allah, Buddha, Mary, self, and every false god imaginable.

Has anyone stopped to consider that our godless courts removed prayer from public school classrooms in 1962?  And the Word of God in 1963?  Yet, we foolishly expect God to honor a National Day of Prayer?  It doesn't work that way folks.

Pray Not for This People!

"Therefore pray not thou for this people, neither lift up cry nor prayer for them, neither make intercession to me: for I will not hear thee.  Seest thou not what they do in the cities of Judah and in the streets of Jerusalem?" -Jeremiah 7:16