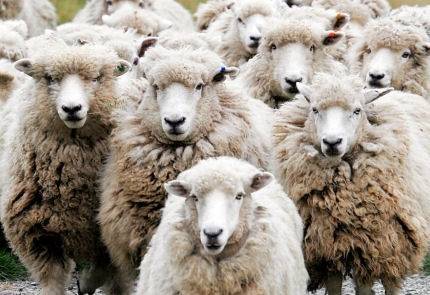 "All we like sheep have gone astray; we have turned every one to his own way; and the LORD hath laid on him the iniquity of us all." —Isaiah 53:6

God's compares us to sheep, prone to wander with little sense of danger. Sheep are basically ignorant animals. Humanity by nature is woefully ignorant of spiritual things. As a matter of fact, most of humanity is ignorant of secular things as well. "Sheeple" is certainly an appropriate term for humanity. The average person is woefully ignorant of the truth, especially the Truth of God's Word. According to the Bible, we need to be as "wise as serpents, but harmless as doves."  We must seek out the truth with an open heart, asking God's Holy Spirit to guide us.

In John 5:39 Jesus didn't tell us to read the Bible, He said... SEARCH THEN SCRIPTURES!!! This means hungering and thirsting to learn the truth.

If you'd like to learn more about the Bible...

The Devil is a master counterfeiter (2nd Corinthians 11:13,14). Jesus said that the thief (Satan) comes only to kill, steal and destroy (John 10:10). So many people today foolishly buy into the religious lies of our time. This is why dishonest conmen, who deceitfully claim to be televangelists sent from God, are raking in hundreds-of-millions of dollars every year from the gullible public. Sadly, many people will send money to any fool who dresses nice, talks smooth and says nice things about Jesus. This is false religion folks! Judas betrayed Jesus with a kiss of affection. Think about that.

I wish all the sheeple would stop sending their hard-earned money to these religious bastards (i.e., fraudulent; having a misleading appearance) on TV, who exploit the name of Jesus to make money (2nd Peter 3:1-3). God hates modern televangelism because it's ALL centered around filthy lucre. I've yet to see even one religious bastard on TV who didn't beg people for contributions. This is woeful wickedness. The church is not about making money. Jesus never started a business! Honestly, it would be a tremendous thing if 95% of all the churches in America burned to the ground, because they're worthless.

BEWARE! Satan is out to get you! If he can't get your soul, he'll attack your life. If he can't get your life, he'll steal your wife. If he can't get your wife, he'll attack your children. If the Devil can't get your children, he'll go after your career. Our only hope is God's divine protection... "The angel of the LORD encampeth round about them that fear him, and delivereth them" (Psalm 34:7). Matthew 18:10 wonderfully states, "Take heed that ye despise not one of these little ones; for I say unto you, That in heaven their angels do always behold the face of my Father which is in heaven." A guardian angel, amen! Even still, we are living in a fallen world and God won't force people to do the right thing. God has given to each of us a freewill, which places great responsibility on our part. Are we making the right choices?

There is one, and I mean only one, way into Heaven and that is the through the redeeming work of the Lord Jesus Christ (John 14:6; Acts 4:10-12). Our sins are woeful, making us guilty before God (Romans 3:19). We all deserve to plunge into the depths of Hell for all eternity (Romans 6:23; Revelation 21:8), even if we've only committed one sin (James 2:10). Mankind can't possibly understand just how wicked he is without fully comprehending the holiness of God, which no man can. We just need to take God at His Word. We all deserve to be punished, separated from God for all eternity because of our own sins. Thankfully, Jesus shed His precious blood for our sins... "Forasmuch as ye know that ye were not redeemed with corruptible things, as silver and gold, from your vain conversation received by tradition from your fathers; But with the precious blood of Christ, as of a lamb without blemish and without spot" (1st Peter 1:18,19).

Ninety-five percent of everything in the religious world today are LIES, DECEIT AND FALSEHOOD! Only by searching the Word of God, the King James Bible, can we identify Satan's works of darkness.

Sheeple, the Newsmedia and the Government

Sheeple don't think for themselves; they turn on the TV to form their opinions, which is the big problem in the United States (or should I say, the "Divided States"?). Fox News leads the way in brainwashing people. It's amazing how gullible people are. Within moments of the 911 attacks, people on the streets of New York were already calling for bomb-strikes overseas against the "terrorists" responsible. This is exactly what the Bush Administration and their accomplices wanted, i.e., a pretext to invade Afghanistan and then Iraq to steal their oil.

I am amazed just how predicable the human nature is. The conman politicians operating the federal government have mastered the art of lying propaganda. They are criminals without a conscience. It is a shame that the average American never thinks beyond what they were taught in the public school system—to vote. I'll tell you, only a completely ignorant person would vote either Democrat or Republican. Both parties are corrupt, evil and rotten to the core. Both parties are merely two separate legs walking towards a New World Order, i.e., a Global Totalitarian Godless Communist Police State.

All it would take is for the government to blow up one passenger bus in the U.S. and the American people would sell their souls for protection. Sheeple! This is exactly what happened after the 911 attacks, and the Patriot Acts were formed. Using Hurricane Katrina as an excuse, FEMA has also been completely overhauled (confiscated) by the powers that be. Now, in 2008, they also want control of the lending industry after the worst collapse of Wall Street since 911. Each and every disaster ends up causing more citizens to surrender to the government. The Devil is in the works. END

The truth will set you free! 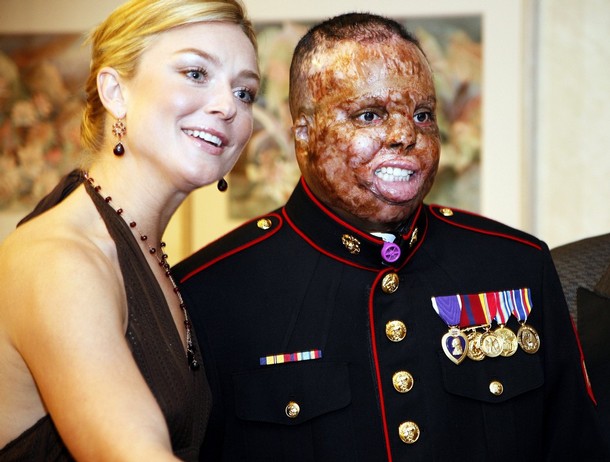 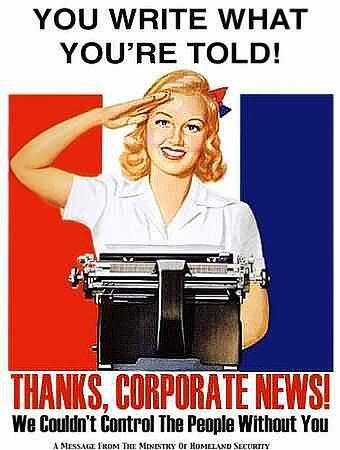 We Couldn't Control the People Without You!

Here are some webpages with lots of eye-opening material...

Evils in Government | Evils in America

The truth can be dealt with, but a lie cannot!

Wake-up America! You need to listen to Alex Jones!

"Only a virtuous people are capable of freedom. As nations become corrupt and vicious, they have more need of masters." —Benjamin Franklin

"That they all might be damned who believed not the truth, but had pleasure
in unrighteousness." —2nd Thessalonians 2:12