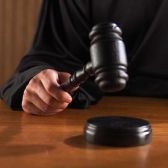 You are in trouble with the Law—God's Law. All humanity is sinful in God's eyes, because we've all broken God's Laws. Romans 3:19 states: “Now we know that what things soever the law saith, it saith to them who are under the law: that every mouth may be stopped, and all the world may become guilty before God.” The word “guilty” in Romans 3:19 means “having lost one's case in court.”

God's Law indicts (formally charges) mankind for having violated God's holy Law. God has declared all mankind “guilty,” and has thus declared the death penalty for those found guilty, to suffer eternal punishment in the Lake of Fire.

Romans 6:23, “For the wages of sin is death; but the gift of God is eternal life through Jesus Christ our Lord.”

“Revelation 21:8; Re:21:8, “But the fearful, and unbelieving, and the abominable, and murderers, and whoremongers, and sorcerers, and idolaters, and all liars, shall have their part in the lake which burneth with fire and brimstone: which is the second death.”

Thankfully, Jesus offers to be our Advocate (Defense Attorney) . . . “And if any man sin, we have an advocate with the Father, Jesus Christ the righteous.” The word “advocate” comes from the Greek word parakletos and means “an intercessor.” Hence, Jesus Christ is our defense attorney who intercedes for us in God's divine court. This is only made possible by the blood sacrifice of Jesus Christ...

1st Peter 1:18-19, “Forasmuch as ye know that ye were not redeemed with corruptible things, as silver and gold, from your vain conversation received by tradition from your fathers; But with the precious blood of Christ, as of a lamb without blemish and without spot.”

If it weren't for Christ's sacrifice, then divine justice would not be possible for mankind. The penalty for sin had to be paid. Either we had to spend eternity in the Lake of Fire, or else God's Son had to suffer in our place and suffer the wrath of God the Father, Who forsook His Son at Calvary. God only turns His back on Christ-rejecters Who die in their sins. They have chosen by their own unbelief to pay for their own sins. Jesus shed His physical blood for our sins at Calvary, to pay for our sins, thus enabling God the Father (the Prosecutor) to offer mankind complete justification.

When we receive the Gospel as payment for our sins, we are justified in the eyes of God, Who places Christ's righteousness upon our record. That's a pretty good deal don't you think? Jesus took our sins upon Himself on the cross, and then placed His righteousness upon us, just as if we'd never sinned. You can have all this for just the taking, by faith in Jesus as the Christ, the Son of the living God. Do you believe that Christ died, was buried and miraculously rose from the dead for your sins? Mark 1:15, “And saying, The time is fulfilled, and the kingdom of God is at hand: repent ye, and believe the gospel.”

Please note that salvation is NOT a plea-agreement. A plea-agreement is still a conviction. A plea-agreement is a lesser sentence for a crime accepted by the accused to avoid going to a jury trial (where if convicted, the maximum sentence would be imposed). This is how man's inferior court system works; however, God does not need a jury, for He knows everything about everyone and every situation. There is nothing that God does not know. Proverb 24:12, “If thou sayest, Behold, we knew it not; doth not he that pondereth the heart consider it? and he that keepeth thy soul, doth not he know it? and shall not he render to every man according to his works?”

Astronomers have estimated that there are at least a billion trillion stars in the universe. Numerically stated that is one sextillion, or 1,000,000,000,000,000,000,000 stars! There are many more no doubt, but this is the minimum that man has discovered in God's incredibly vast and amazing universe. Amazingly, the Bible teaches that God has a name for each and every star. Psalm 147:4, “He telleth the number of the stars; he calleth them all by their names.” If God can create, maintain, name and keep track of that many stars, He can certainly keep track of the number of hairs upon our head or what sins we have committed.

It is often said that Christ died for us, but the main thing was that Christ died FOR GOD in order that God could accept us back, for Christ and Christ alone satisfied the righteous and holy demands of God! All that God requires is that we come by way of the Lord Jesus Christ for salvation (John 14:6). There is no other hope of salvation (Acts 4:10-12). If we do not accept the plea agreement, then we are summoned to stand trial at The Great White Throne of Judgment (Revelation 20:11-15). The lost will be judged according to their works (Revelation 20:13).

If any sinner, no matter how vile or wicked, repents of their sins by owning before God that they are as vile as He has declared them to be in His holy Word, and that sinner turns by faith to the Lord Jesus Christ to be forgiven, believing that He is the Christ, the Son of God—then God will save that person. Christ's righteousness is then imputed (charged) to that person's account... “But to him that worketh not, but believeth on him that justifieth the ungodly, his faith is counted for righteousness. Even as David also describeth the blessedness of the man, unto whom God imputeth righteousness without works” (Romans 4:5-6). If we are willing to admit our guilt of sin, and believe on Jesus Christ for forgiveness, then God is willing to justify us on the basis of Christ's blood sacrifice and set us free from the curse of the Law. Amen and thank you Lord!

And one final note, there's something called “Double Jeopardy” in the 5th Amendment of the Bill of Rights (the first 10 amendments to the U.S. Constitution), which states that no person can be tried for the same crime twice. Although God is not governed by man's laws, the same principle holds true concerning salvation. Once you receive Jesus Christ as your personal Savior and your sins are washed away forever, you'll never be in danger of losing your salvation or being tried twice for the same sins again. You cannot be tried for the same sins twice. Once God forgives you, it's over. In other words, if saved always saved. Once you repent of your unbelief and turn to Christ by faith, receiving His death, burial and resurrection as payment for your sins, then you are freely justified forever on the basis of Christ's sacrifice!!!

It is God's salvation. Man has no part except to believe. John 1:13, “Which were born, not of blood, nor of the will of the flesh, nor of the will of man, but of God.” Jesus paid it all. We go to Heaven because of where we are looking, and not because of what we are doing. Isaiah 45:22, “Look unto me, and be ye saved, all the ends of the earth: for I am God, and there is none else.” Man had sinned. God the Father in His love sent His only begotten Son to the cross to pay the price to redeem man back to God. Christ's sacrifice was acceptable to God the Father as payment. This is divine justice. No other payment will suffice. Only Christ's sacrifice is acceptable to God the Father. Therefore, no amount of religious devotion, self-righteousness, dedication to Christ, nor involvement with the churches can free a man from the curse of the law and the burden of his sins.

My friend, if you are unsaved, then you are in trouble with the court of Heaven. You have been summons to The Great White Throne Of Judgment, where you will be sentenced. The Bible says that you are already GUILTY if you have rejected Jesus as the Messiah.

John 3:16-18, “For God so loved the world, that he gave his only begotten Son, that whosoever believeth in him should not perish, but have everlasting life. For God sent not his Son into the world to condemn the world; but that the world through him might be saved. He that believeth on him is not condemned: but he that believeth not is condemned already, because he hath not believed in the name of the only begotten Son of God.”

If you have rejected Christ, then you have already been found guilty by a grand jury (the Godhead). When you enter into court one day in eternity, you WON'T have an attorney present. You have already been arraigned (formal charges have been brought against you). You can foolishly try to plead not guilty, but God has your entire life recorded since the day that you were born. The sins that you thought would STAY in Las Vegas were RECORDED in Heaven. God's got it all down in His books. You don't stand a chance!

So why not do the right thing and believe upon the Lord Jesus Christ. Receive what He has done FOR YOU, because He loves you and wants you to be with Him forever. The choice is yours. Most people are fools, headed straight for damnation in the fires of Hell beneath. I don't know about you, but I want to spend eternity with Jesus, God the Father, the Holy Spirit, the angels, the saints and all the host of Heaven in peace, joy, love and righteousness!!!