The Power of a Woman Over a Man 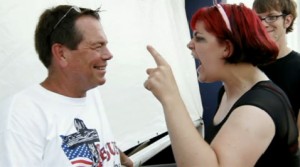 1st Peter 3:1,“Likewise, ye wives, be in subjection to your own husbands; that, if any obey not the word, they also may without the word be won by the conversation of the wives.”

Wow! Ladies, do you realize what the Bible is saying? God is literally saying that you have more power over your husband than the Bible does. That's exactly what 1st Peter 3:1 states. If your husband won't listen to God's Word, then perhaps by your obedient submission your husband will turn to God, because of the testimony of your faith.

I honestly believe that Noah's wife was greatly responsible for helping Noah and his sons build and finish the ark. God could have just gave them an ark. Why did God ask Noah to spend 120 painstaking years to build an ark 450 ft. long? It's because God wanted to build Noah and his sons. Amen!

The wisest man who ever lived, Solomon, said in Ecclesiastes 7:26, “And I find more bitter than death the woman, whose heart is snares and nets, and her hands as bands: whoso pleaseth God shall escape from her; but the sinner shall be taken by her.” Solomon had 700 wives and 300 concubines; but he probably never had one true love, as evidenced by the book Song of Solomon, in which he fails to seduce the young virtuous woman to be his bride. In the Song of Solomon in the Old Testament, Solomon represents Satan, who tries to seduce believers (the Bride of Christ) away from the Good Shepherd to whom we are betrothed.

The Bible says that Jezebel “stirred up” Ahab's heart to do evil. 1st Kings 21:25, “But there was none like unto Ahab, which did sell himself to work wickedness in the sight of the LORD, whom Jezebel his wife stirred up.” Carefully notice in 1st Kings 21:25 the phrase concerning Ahab, “which did SELL HIMSELF.” Ahab sold himself to the Devil. We see many people, including everyone in the Ecumenical Movement, selling their souls to Satan for the almighty dollar.

Jezebel conspired to have Naboth killed, to steal his land for Ahab. Jezebel was the worst thing that ever happened to Ahab. Jezebel was a malicious, greedy, conspiring witch. The Bible says that Ahab obeyed the voice of the Lord, but his evil wife Jezebel turned Ahab's heart away from serving the Lord and doing right.

Job's wife told him to curse God and die, and so Job cursed the day he was born and wished he were dead!

Lot's wife turned back to see the destruction of Sodom, and transformed into a pillar of salt.

Delilah enticed Samson for 9-days straight, until he finally succumbed to her tears and womanly charm. And then the Philistines tortured Samson and burned his eyes out. It cost him his life. She betrayed his trust.

Sara convinced Abraham that God wasn't going to keep His promise, and so she contrived a plot for Abraham to father a child by her Egyptian handmaid, Hagar. Jews today commit the same sin by not waiting upon the Lord to fulfil His promise, and so Zionism is their attempt to force the hand of God. Zionism is a false doctrine rooted in unbelief. God said He will return His people to the Promised Land when He returns to reign, and not before (Jeremiah 23:5-8).

1st Peter 3:1-4, “Likewise, ye wives, be in subjection to your own husbands; that, if any obey not the word, they also may without the word be won by the conversation of the wives; While they behold your chaste conversation coupled with fear. Whose adorning let it not be that outward adorning of plaiting the hair, and of wearing of gold, or of putting on of apparel; But let it be the hidden man of the heart, in that which is not corruptible, even the ornament of a meek and quiet spirit, which is in the sight of God of great price.”

A woman oftentimes has more power over a man than God does. That is what 1st Peter 3:1-2 teaches. Genesis 3:17 supports this teaching...

Genesis 3:17, “And unto Adam he said, Because thou hast hearkened unto the voice of thy wife, and hast eaten of the tree, of which I commanded thee, saying, Thou shalt not eat of it: cursed is the ground for thy sake; in sorrow shalt thou eat of it all the days of thy life.”

God told Adam that because he succumbed to his wife's very bad advice, Adam would also suffer severe consequences. There's a lot of BAD ADVICE floating around in churches today. Many people are meddlers, minding everyone else's business except their own (and they fell justified in doing it). I tell you truthfully, church is a dangerous place to be if you're going through difficulties in your marriage, because many well-meaning people can be very mean as well.

Plainly stated, church people will ruin your marriage if it's weak. I say “church people” because there is social contact at church, sharing of information (including one's dirty laundry in a family); and because people are woeful sinners who have historically proven to be nosy, hypocritical and destructive. I am not endorsing the secular band, the Bee Gees; but they had it absolutely right in there song, How Deep is Your Love?

The greatest thing you can have today, and it's rare, is a strong relationship with your spouse. Most marriages end because one spouse has an unbiblical view of marriage, i.e., that it's ok to bail out under certain circumstances (such as unfaithfulness). But God said marriage is for life. What God has brought together, let not man put apart. Marriage today is increasingly viewed as a business agreement (as evidenced by Al and Tipper Gore's 2010 divorce), and it is tragic.

They say a picture's worth a thousand words. This is what a Christian woman SHOULDN'T look like...

The infamous Tammy Faye Bakker of the now defunct P.T.L. (praise the Lord) Club. She divorced her husband while he was in prison for misappropriating funds from P.T.L. contributors, to pay off a woman whom he had an affair with; and then Tammy became a spokeswoman for the lesbian Movement. The whore, Jessica Hahn, who had an affair with Jim Bakker went and sold her story and body to Playboy magazine for over a million dollars. Welcome to America!

A Trip to Hell