Ouija Boards are of the Devil

Ouija Boards are evil and Satanic!

"There shall not be found among you any one that maketh his son or his daughter to pass through the fire, or that useth divination, or an observer of times, or an enchanter, or a witch, Or a charmer, or a consulter with familiar spirits, or a wizard, or a necromancer.  For all that do these things are an abomination unto the LORD: and because of these abominations the LORD thy God doth drive them out from before thee.  Thou shalt be perfect with the LORD thy God." -Deuteronomy 18:10-13

Do you know what witchcraft is?  Witchcraft is seeking help or guidance from any spiritual source other than God.  There are only two sources of spiritual power: God or Satan.  Ultimately there is only ONE source of power because the only power Satan has is that which God has given him (Luke 4:6).  If it's not the power of God's Holy Spirit, then you are dealing with the devil.  It's as simple as that folks.  Anytime you here someone using words like "spirits" or "spiritual" without mentioning Jesus Christ or the Bible, run as fast as you can.  The devil is a spirit, just as God is a Spirit.  Our battles in this life (according to the Bible) are ultimately against the devil (Ephesians 6:12).  The devil works inside people's hearts to lead them to do horrible things.  The devil can't make anyone do anything, but he inspires them with evil to the point where they do his will without hesitation.

All forms of horoscopes, Tarot cards, psychics, palm readings, fortune telling, crystal balls, Ouija boards, astrology, worshipping or contacting the dead, and sorcery are of the devil.  "Sorcery" is an interesting word in the Bible.  It is derived from the same Hebrew word that our word "pharmacy" today comes from.  Hence, sorcery is the use of drugs as a medium to contact the demonic world.  If you've ever spoken with someone who was a serious drug addict, they can tell you of the demonic experiences they had while high on drugs.  I have talked with such people who claim that they saw demons and unbelievable nightmares.  Drugs will mess you up quickly.

I have written this article to solemnly WARN anyone who may be reading this to...PLEASE stay as far away as you can from the evil things I've just shared with you.

Listen my friend, these things which may seem harmless to you have completely destroyed some people's lives.  People have invested their life savings into certain financial investments based upon what some astrologer said.  I'm not kidding!  I actually heard this nut on TV advising people how to invest their money based upon the alignment of the planets and constellations.  I was listening to a talk show on the radio last week and some crazy nut called in.  The caller insisted that George Bush was going to be arrested next week based on his astrological analysis.  I love what the radio host said, "I think your planets are out of alignment Sir."  Where do these nuts come from?  I mean, it's ok to expose a conspiracy and blow every bodies mind if you have some information to back it up...but the alignment of the stars?  Please!  Our opinions should be based upon tangible evidence...not hocus pocus, candles, horoscopes, cards, stars, whims or superstitions.

The Evil Influences of Witchcraft

You'd be shocked if you knew how many people base their entire lives upon what some nut writes in the daily horoscope column of the newspaper.  It's Satanic folks!  Even if it seems to be accurate information...it is still evil and Satanic.  It is never right to do wrong in order to get a chance to do right!  It's wrong for local police authorities to consult with psychics in an attempt to locate missing persons.  But you say, "wouldn't you want to try every means possible to find a loved one if they were missing?"  Not if I have to consult with the devil.  I believe that God answers prayer.

I've got to share this with you.  I recently read about a Oregon man who's pet-sitter lost his dog.  This guy went nuts looking for his dog.  He lost his business, tapped into his retirement savings, consulted with four psychics and a witch, spent $8,000 on newspaper ads, hired a dog tracker, and drove thousands of miles looking for his dog.  I have this unbelievable newspaper article in front of me.  Here's the story...

Can you imagine?  Luckily for him he finally found his old buddy.  That must be some dog!  I don't know of many men who would do that for his own wife.  I'm serious.  It's crazy.

It is sinful to seek the help or advice of a psychic or a witch.

"Regard not them that have familiar spirits, neither seek after wizards, to be defiled by them: I am the LORD your God." -Leviticus 19:31

God is serious about this stuff, and so should you be.

"And he made his son pass through the fire, and observed times, and used enchantments, and dealt with familiar spirits and wizards: he wrought much wickedness in the sight of the LORD, to provoke him to anger." -2nd Kings 21:6

I remember a couple years ago hearing on the news that India had announced that there would be NO nuclear war between them and Pakistan.  They based this knowledge upon the predictions made by the government of India's top astrologers.  Right!  The stargazers didn't help Babylon...

"Thou art wearied in the multitude of thy counsels. Let now the astrologers, the stargazers, the monthly prognosticators, stand up, and save thee from these things that shall come upon thee." -Isaiah 47:13

Abortion and Witchcraft are Inseparable

These evils are all alive and well today...

"And he caused his children to pass through the fire in the valley of the son of Hinnom: also he observed times, and used enchantments, and used witchcraft, and dealt with a familiar spirit, and with wizards: he wrought much evil in the sight of the LORD, to provoke him to anger." -2nd Chronicles 33:6

Hell is the place of the future punishment call "Gehenna" or "Gehenna of fire."  This was originally the "valley of the son of Hinnom," located south of Jerusalem, where the filth and dead animals of the city were cast out and burned; a fit symbol of the wicked and their future destruction.  It was the cities garbage dump.  Unbelievably, the Moloch religion required parents to sacrifice their children upon the fiery arms of Moloch.  This was no doubt a form of abortion.  Today, parents sacrifice their children on the alter of feminist rights, as doctors use surgical saws to rip babies' bodies painfully apart piece by piece unto all LIFE is gone.  Sometimes they dissolve the babies in acid, or suck their brains out after cracking the back of their skull open.  The abortionists are wonderful people aren't they?  Murderers!

Do not think it a coincidence that apostasy, feminism, witchcraft, homosexuality, rock-n-roll, fornication, and abortion have all saturated America at the same time--they all go together! 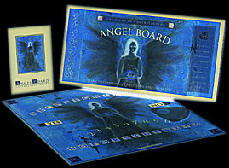 All forms of horoscopes, Tarot cards, psychics, palm readings, fortune telling, crystal balls, Ouija boards, astrology, worshipping or contacting the dead, and sorcery are of the devil.   This includes the veneration (worshipping) of the dead.  The Catholic church worships statues of former so-called "saints."  I remember years ago meeting a Spanish man who kept a statue of Saint Anthony and his dog behind the front door to his apartment.  There were several jars of varying amounts of water with a penny at the bottom of each glass container.  I asked what the purpose was for these strange things and he said it was to ward off evil spirits from his home.  He said he was a Catholic and had learned this at church.

The Catholic church teaches people to pray to dead Saints.  This is evil.  A statue over your grave cannot pray for you.  You cannot pray a person out of hell, and there is NO such place as purgatory.  Praying to statues of any size is idolatry.   Worshipping anyone or anything other than God is sin!  Jesus accepted worship from people because He is God.  Mary did NOT accept worship from anyone because she was just a dirty-rotten sinner like you and me.  Mary had to get saved, just like you and I do.

The Heart of the Matter

Let me ask you a question...are you saved?

Simply pray in your heart and admit to Christ that you are a sinner.  Ask Him to save your soul from hell and forgive you of all your sins.

Invite Him into your heart as your personal Saviour

That's it friend.  Your not saved because of any magical prayer.  No, your saved because you go to Jesus to be saved (Romans 10:13).  You don't go to the church or to the pope, you go directly to the one Who died on the cross for you...The Lord Jesus Christ (John 10:9).