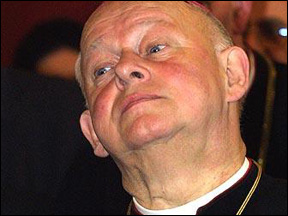 The Vatican instructed Catholic bishops around the world to cover up cases of sexual abuse or risk being thrown out of the Church.

The Observer has obtained a 40-year-old confidential document from the secret Vatican archive which lawyers are calling a 'blueprint for deception and concealment'. One British lawyer acting for Church child abuse victims has described it as 'explosive'.
The 69-page Latin document bearing the seal of Pope John XXIII was sent to every bishop in the world. The instructions outline a policy of 'strictest' secrecy in dealing with allegations of sexual abuse and threatens those who speak out with excommunication.

They also call for the victim to take an oath of secrecy at the time of making a complaint to Church officials. It states that the instructions are to 'be diligently stored in the secret archives of the Curia [Vatican] as strictly confidential. Nor is it to be published nor added to with any commentaries.'

The document, which has been confirmed as genuine by the Roman Catholic Church in England and Wales, is called 'Crimine solicitationies', which translates as 'instruction on proceeding in cases of solicitation'.

It focuses on sexual abuse initiated as part of the confessional relationship between a priest and a member of his congregation. But the instructions also cover what it calls the 'worst crime', described as an obscene act perpetrated by a cleric with 'youths of either sex or with brute animals (bestiality)'.

Bishops are instructed to pursue these cases 'in the most secretive way... restrained by a perpetual silence... and everyone... is to observe the strictest secret which is commonly regarded as a secret of the Holy Office... under the penalty of excommunication'.

Texan lawyer Daniel Shea uncovered the document as part of his work for victims of abuse from Catholic priests in the US. He has handed it over to US authorities, urging them to launch a federal investigation into the clergy's alleged cover-up of sexual abuse.

He said: 'These instructions went out to every bishop around the globe and would certainly have applied in Britain. It proves there was an international conspiracy by the Church to hush up sexual abuse issues. It is a devious attempt to conceal criminal conduct and is a blueprint for deception and concealment.'

British lawyer Richard Scorer, who acts for children abused by Catholic priests in the UK, echoes this view and has described the document as 'explosive'.

He said: 'We always suspected that the Catholic Church systematically covered up abuse and tried to silence victims. This document appears to prove it. Threatening excommunication to anybody who speaks out shows the lengths the most senior figures in the Vatican were prepared to go to prevent the information getting out to the public domain.'

Scorer pointed out that as the documents dates back to 1962 it rides roughshod over the Catholic Church's claim that the issue of sexual abuse was a modern phenomenon.

He claims the discovery of the document will raise fresh questions about the actions of Cardinal Cormac Murphy-O'Connor, the head of the Roman Catholic Church in England and Wales.

Murphy-O'Connor has been accused of covering up allegations of child abuse when he was Bishop of Arundel and Brighton. Instead of reporting to the police allegations of abuse against Michael Hill, a priest in his charge, he moved him to another position where he was later convicted for abusing nine children.

Although Murphy-O'Connor has apologised publicly for his mistake, Scorer claims the secret Vatican document raises the question about whether his failure to report Hill was due to him following this instruction from Rome.

Scorer, who acts for some of Hill's victims, said: 'I want to know whether Murphy-O'Connor knew of these Vatican instructions and, if so, did he apply it. If not, can he tell us why not?'

A spokesman for the Catholic Church denied that the secret Vatican orders were part of any organised cover-up and claims lawyers are taking the document 'out of context' and 'distorting it'.

He said: 'This document is about the Church's internal disciplinary procedures should a priest be accused of using confession to solicit sex. It does not forbid victims to report civil crimes. The confidentiality talked about is aimed to protect the accused as applies in court procedures today. It also takes into consideration the special nature of the secrecy involved in the act of confession.'

He also said that in 1983 the Catholic Church in England and Wales introduced its own code dealing with sexual abuse, which would have superseded the 1962 instructions. Asked whether Murphy-O'Connor was aware of the Vatican edict, he replied: 'He's never mentioned it to me.'

Lawyers point to a letter the Vatican sent to bishops in May 2001 clearly stating the 1962 instruction was in force until then. The letter is signed by Cardinal Ratzinger, the most powerful man in Rome beside the Pope and who heads the Congregation for the Doctrine of the Faith - the office which ran the Inquisition in the Middle Ages.
Read and Hear the truth of Genocide in Canada, past and present, at this website: www.hiddenfromhistory.org

It's time for parents to take responsibility for their children and stop sacrificing them on the alter of Catholicism to a bunch of sex demented sickos that are unscripturally forbidden to be married. The entire priesthood is inherently corrupted because of the Vatican's unscriptural rules on celibacy. Nearly half of the priesthood may be homosexual.