The World Mission Society Church Of God (WMSCOG) is a demonic religious cult. The WMSCOG erroneously claims that a Korean man named Ahn Sahng-hong (1981-1985) was Jesus Christ. Sahng-hong was originally a member of the Seventh-day Adventist religious cult (which he joined in 1947), but then founded his own demonic cult in 1964, WMSCOG. They teach that water baptism is required for salvation. The cult is still going strong today. They also teach that “all human beings are angels who have come to the earth after sinning in heaven,”[1] a belief forwarded by Ahn Sahng-hong.[2] As with most so-called Christian cults, they pervert the Word of God, exploiting the Bible to promote their false teachings.

Here's some basic information on the religious cult...

The World Mission Society Church of God (Korean: 하나님의교회 세계복음선교협회) was founded by Ahn Sahng-hong (안상홍) in 1964. The church believes that he is the second coming of Christ because of his fulfillment of prophecies. Ahn Sahng-Hong, died in 1985 leaving the leadership of the church to his spiritual wife, Zahng Gil-Jah(장길자), known in the church as "the Heavenly Mother",[1] and the General Pastor is Kim Joo-Cheol. Its headquarters are located in Bundang, Sungnam City, Kyunggi Province, roughly an hour away from Seoul. Zahng is also chairperson of the New Life Welfare Foundation (새생명복지회)[2] and of the International We Love You Foundation (국제위러브유운동).[3]
The church believes that Zahng Gil-Jah is "God the Mother," who they believe is referred to in the Bible as the New Jerusalem Mother (Gal 4:26), and that Ahn Sahng-Hong is God the Father. The church regards the earthly family system as a copy and shadow of the heavenly family system (Heb 8:5), consisting of a Heavenly Father, Heavenly Mother, and the spiritual brothers and sisters (humans).

On their official website, the World Mission Society Of The Church of God falsely teach that water baptism is how to get one's sins forgiven...

"Baptism is the first step toward receiving God's favor, through which we receive the forgiveness of sins."

LIARS! It's a lie of Satan to add baptism to faith alone in Jesus Christ. No where in the entire Bible are we commanded to be baptized for the forgiveness of sins. Here is Scriptural evidence exposing the heresy of Baptismal Regenartion.

"Therefore Ahnsahnghong is Christ who came in this age according to all the prophecy of the Bible. He restored the truth of the Passover, the tree of life, and saved us from our sin and death. He is our God."

BLASPHEMY!!! That's insane! Can you believe how foolish and misguided so many billions of people are in this world? Either they're following a phony like the Catholic Pope, who claims to be God's voice upon the earth (Ex Cathedra), or else people follow some whacko like Ahnsahnghong who errantly claims to be God on earth. Jesus proved His deity by the mighty works which He did, THAT NO OTHER MAN BEFORE NOR SINCE CAN DO.

John 15:24, “If I had not done among them the works which none other man did, they had not had sin: but now have they both seen and hated both me and my Father.” Only Jesus was able to heal an amputee. When Peter cut off the servant of the high priest's ear in the Garden of Gethsemane, Jesus put it back on (Luke 22:50-51). The Lord did what no other human being has ever done!!! Ahn Sahng-hong never did even one miracle!!!

Both of these men are evil imposters and of the Devil. Ahn Sahng-hong is burning in the fires of Hell this moment, where he will be tormented in flames of God's vengeance for all eternity. All Christ-rejecters go to Hell. 2nd Thessalonians 1:8-9, “In flaming fire taking vengeance on them that know not God, and that obey not the gospel of our Lord Jesus Christ: Who shall be punished with everlasting destruction from the presence of the Lord, and from the glory of his power.”

Here's some more vital information about the WMSCOG cult...

Membership: The World Mission Society of God is present in many countries. One official site states that "the Church of God has grown into a world-class church just within half a century with 400 and 120 churches in Korea and abroad respectively and more than 820,000 followers worldwide."

Isn't that tragic... nearly a million members worldwide! The World Mission Society Church Of God (WMSCOG) is a Satanic cult based in Korea, but has outreaches around the world. As you just read, they have 120 churches in Korea and 400 around the world. That is so sad! Jesus is the only true Messiah. If you follow anyone else you will go to Hell forever. The Bible says that salvation is only found in the name of Jesus...

Ahn Sahng-hong was born in 1918 and had an earthly mother and father. In sharp contrast, Jesus was born of a virgin and had NO earthly father.

Also, Jesus ascended into Heaven in Acts 1:9-11 and the angels said He would return in like manner.

Acts 1:9-11, “And when he had spoken these things, while they beheld, he was taken up; and a cloud received him out of their sight. And while they looked stedfastly toward heaven as he went up, behold, two men stood by them in white apparel; Which also said, Ye men of Galilee, why stand ye gazing up into heaven? this same Jesus, which is taken up from you into heaven, shall so come in like manner as ye have seen him go into heaven.”

When the Lord returns at the Second Coming, people will visibly see Him descend upon the earth (in the same manner which He departed 2,000 years ago). Ahn Sahng-hong was born, he didn't come down from the clouds as the Bible says. The Lord is not coming to the earth at the Pretribulation Rapture; but rather, all of the saints will be CAUGHT UP to meet the Lord in the air (1st Thessalonians 4:16-17).

Since Ahn Sahng-hong was originally a member of Seventh-day Adventism (SDA), it does not come as a surprise that the WMSCOG cult worships the Sabbath as do SDA's. The Sabbath pictured Jesus Christ, Who is our Sabbath today. Colossians 2:14-16 teaches that the Sabbath was nailed to the cross, Old Testament ceremonial law done away with. When Christ fulfilled what the Sabbath symbolized, the type of the Sabbath was no longer needed. We rest in Christ for our salvation, ceasing from our self-righteous labours (pictured by the six day work week).

Ahnsahnghong also taught that there is a female aspect to the Godhead, which he called the Mother God. This is feminist theology and it's of the Devil. The Biblical Godhead is totally masculine (God the Father, God the Son and the Holy Spirit is referred to with the masculine pronoun, “He” in John 14:26). The WMSCOG religion is a Satanic cult from Hell. It is sad that millions of Koreans have joined this false prophets and will spend eternity burning in the Lake of Fire with him.

Salvation is not found in any religion, but rather, only in the Lord Jesus Christ. The Lord warned us that false prophets would claim He had returned. Matthew 24:5 and 24:23, “For many shall come in my name, saying, I am Christ; and shall deceive many. ... Then if any man shall say unto you, Lo, here is Christ, or there; believe it not.” The Bible tells us not to believe anyone who claims to be Christ. Famous writer David Icke has claimed in the past to be Jesus Christ, another lying false prophet. The Bible warns against false prophets who claim to be Christ. 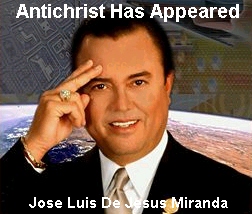 Another big time whacko is Jose Luis De Jesus Miranda. According to 1st John 2:22, Jose Luis De Jesus Miranda is a LIAR and an ANTICHRIST. To no surprise, he uses reverse psychology, openly admitting to being an “Antichrist,” which confuses his victims. But one thing Mr. Miranda won't admit to is being a BIG LIAR. Anyone who perverts the Gospel message, or denies the Lord Jesus Christ is a LIAR! 1st John 2:22 calls Mr. Miranda a “LIAR.”

As we approach the end times, we are increasingly going to see false Christ's arise. I believe the reason why is because people are so woefully ignorant of the Word of God these days that they are easy prey. The Devil is working relentlessly to dumb people down spiritually. The Devil has taken our Bibles away. Instead of the trustworthy King James Bible which faithfully preserves the inspired Words of God, most people are now using the New International Version (NIV) translated by at least two known homosexuals, including the chairman of the Old Testament committee. They completely removed the word “sodomite” from the NIV, catering to the same-sex agenda of this wicked generation. The New NIV 2011 caters to the gender-neutral agenda of the evil generation. As America is changing, so also are our Bible versions, just as God warned (Romans 1:25). Well I've got good news (or bad, depending on which side you're on)... GOD HASN'T CHANGED, HE'S STILL THE SAME (Hebrews 13:8; Malachi 3:6). Whew! What an awesome God!

Colossians 2:8, “Beware lest any man spoil you through philosophy and vain deceit, after the tradition of men, after the rudiments of the world, and not after Christ.” The word “spoil” in Colossians 2:8 is the Greek word sulagogeo which means “to lead away as booty, that is, (figuratively) seduce.” Booty is goods or money obtained illegally. Hence, Satan wants to seduce us away from Jesus Christ through philosophy and vain deceit, through worldly established principles (such as humanism, psychology and evolution) and the traditions of men. Notice that the Bible directs us to Jesus Christ. Amen! We learn about Jesus in the Scriptures, which is exactly what Jesus said in John 5:39, “Search the scriptures; for in them ye think ye have eternal life: and they are they which testify of me.”

Matthew 24:24, “For there shall arise false Christs, and false prophets, and shall shew great signs and wonders; insomuch that, if it were possible, they shall deceive the very elect.”