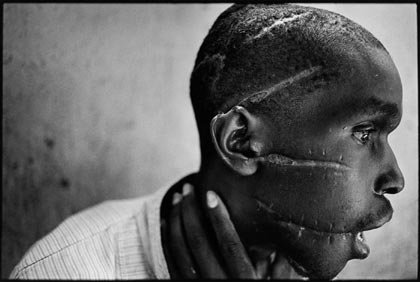 When UN sanctioned rebels invaded Rwanda in 1994, they raped most women and girls repeatedly in an attempt to genocide their tribal identity. The men and young boys were slaughtered. The young man above was left for dead, after having been hacked to pieces by a monster with a machete. The Hutu militia will burn in the hottest fires of Hell in eternity. God will not be mocked and has promised to recompense evil for evil (Romans 12:19).

Search the internet and you'll find horrifying accounts of gang-rape of young girls. The hypocritical United Nations did nothing, because they were behind the attacks. The UN was started by The Council On Foreign Relations, a visible front organization of the New World Order. Humanity are like ants to be crushed by the global elite.

These people are scum, who have sold their souls to Satan to work evil in the sight of God almighty. What happened in Rwanda has gone unpunished. There is no justice. God will avenge (Matthew 7:2; 1st Thessalonians 4:6; Romans 14:10-12). God will also punish those who had the power to stop the killing and didn't. If that had been a Jewish woman gang raped, the entire U.S. military would have been deployed; but no one cares about the life of an African Negro. Young girls and boys were raped and then had their heads sliced open with machetes like watermelons. Some pretended to be dead in piles of corpses until help arrived days later.

In Rwanda, Too, Rape Was a War Crime and Must Be Punished
By Janet Fleischman and Binaifer Nowrojee
July 25, 1996

WASHINGTON— In the genocide two years ago [1994], many of Rwanda's women were brutally raped — in front of their relatives, sometimes with gun barrels or pieces of wood — and were then forced to watch as their assailants murdered their loved ones. Thousands of women were raped, gang-raped, mutilated, held in sexual slavery or forcibly taken as "wives" by their persecutors.

Not one of those indicted so far by the International Criminal Tribunal on Rwanda, however, has been charged with rape. This aspect of the genocide must not be neglected, and right now the tribunal has a perfect opportunity to include rape in its prosecution.

SOURCE: In Rwanda, Too, Rape Was a War Crime and Must Be Punished - NYTimes.com

Sadly, thousands of American women have been raped by their own peers in the military. A U.S. Department of Defense report in 2008 stated that nearly 3,000 female soldiers were sexually harassed, assaulted or raped by their American comrades during the War in Iraq, in some cases by their commanding officers.

Under the treasonous NDAA signed into law by President Obama on December 31, 2011 military troops can now have sex with animals or commit acts of homosexuality without fear of punishment. Due to the increase of men raping men, NDAA needed to be passed to hide the prevalence of homosexuality in the U.S. military today. Nazi's soldiers were notoriously homosexual, as were the Russians under Stalin's reign of terror between 1920 and 1950.

It was Stalin's death that eventually brought about the armistice (ceasefire agreement) in Korea in 1953. Hundreds-of-thousands of soldiers died in the Korean war, mostly Chinese young men. The Chinese and North Korean army brutally tortured and killed South Korean and American POW's.

President Obama's administration is so evil that on January 19, 2011 at a White House State dinner, about six minutes into his set, their pianist Lang Lang began tapping out a famous anti-American propaganda melody from the Korean War: the theme song to the movie “Battle on Shangganling Mountain.” The film depicts a group of “People’s Volunteer Army” soldiers who are first hemmed in at Shanganling (or Triangle Hill) and then, when reinforcements arrive, take up their rifles and counterattack the U.S. military “jackals.” Can you believe this? My uncle died fighting in the Korean War and these monster-holes honor the Chinese soldiers by calling America's veterans “Dogs” and “Jackals”.

NOTHING happens at the White House without the president's approval. The Zionist criminals who groomed and appointed Obama into the White House are testing to see how stupid and far gone the American people have become. This was clearly evidenced in January of 2012 when President Obama public suggested that he simply bypass congress altogether. Mr. Obama paused and waited for the crowd's reaction, which was a give-away as to what he was doing. When the crowd didn't cheer as he had hoped, Obama repeated the exact same statement and the crowd burst forth in praise and cheer of bypassing congress. Watch the video for yourself and you'll see what I mean... Dumb Americans Cheer Wanna-Be Dictator President Obama Who Wants to Bypass Congress.

President Barack Obama and his piano player would be hung in public if this were the times of the Civil War.

President Barack Obama refuses to place his hand over his heart at the White House when others are pledging allegiance to the American flag. Obama is a horrible man. His name is really Barry Sottero, and he was born in Kenya. Mr. Obama doesn't even have a U.S. birth certificate. Just like Bill Clinton who dodged the Vietnam War draft and fled to Canada, Obama is another imposter. And apostate Independent Fundamental Baptist Pastors endorse Obama's presidency!!! I'm going to vomit!!! Don't you call yourself a patriotic American buddy! You need to put your golf club away pastor, and set down your BBQ spatula, and get on your knees and beg God to forgive your wicked heart, and give you a new heart, because you're not right with God. God help us!!!