You're Not Right With God If You Vote For Mitt Romney!

Proverb 12:22, “Lying lips are abomination to the LORD: but they that deal truly are his delight.”

All U.S. Presidents, Democrat and Republican alike, have financed abortion since 1973! 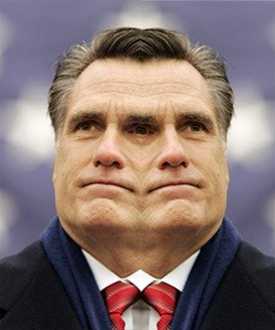 Pictured to left is 2012 U.S. Presidential candidate, Mitt Romney, who is a high-level member of the Mormon religion. The morphed photo of Mitt Romney as being two-faced is a perfect representation of the secretive Mormon church.

It is evil to vote for evil. Mitt Romney is an evil man, who has lied again and again throughout his political career as an opportunist. The videos are shocking and laughable that anyone would be so naive and dumb to vote for this guy. All I can say is that if you are so far gone in your Christian faith that you'd vote for a sex-perverted Mormon who has lied his way throughout his career, then you truly don't walk with the holy God of the Bible that I walk with. Jesus never once entered into politics in His life.

Romney views Jesus as being equal with Muhammed, and Romney views Jesus as being brothers with Lucifer. Both views are demonic and untrue. Jesus created Lucifer, an archangel, who has now become Satan, the accuser. In sharp contrast, Jesus is almighty God according to the holy Scriptures. Muhammad is dead, still buried in his tomb. Mormonism is a demonic cult founded by Joseph Smith (a 33rd degree Freemason) in 1830. You're not right with God if you vote for Obama or Romney, two traitors to America. The hope of America is not in The White House, but in our pulpits.

Here are some related helpful articles and sermons...

Don't be a fool. We as God-fearing Christians are fed up with the blatant lies and garbage from political imposters who falsely claim to be against abortion, but finance it as soon as they take office. We're tired of liars like Romney who promise new economic reform, while the Federal Reserve Bankers continue to ravish our nation since 1913 for TRILLIONS of dollars!!! Truly, there's not a more evil group of criminals in American history than the financiers behind the Federal Reserve System, which is 100% banking fraud!!!

Banking: The Greatest Scam On Earth
(every Christian should expose this woeful evil)

I've been studying these evils since 2002 and I'm telling you, all recent Presidents since Jimmy Carter have been bought off by the banking cartel. They murdered President John F. Kennedy. The whole Democrat/Republican political thing is a humongous fraud. There's not a dime's difference between the two seemingly opposing political platforms. Regardless of which party is in power... the wars continue, the national debt worsens, the jobs keep disappearing overseas, the economy worsens, et cetera.

It's disgusting that so many Baptist pastors are supporting Mitt Romney. The apostle pastor of The First Baptist Church of Dallas, Texas, Robert Jeffress, urged 300 pastors in the Texas area to support Mitt Romney. That pastor needs to get his wicked heart right with God. It is never right to vote for the lesser of two evils. You DO have a choice to vote for a third party candidate or not at all. No one has to vote for evil, and you'll answer to God if you do for all the evil that Mitt Romney brings upon this nation. I guarantee you that no matter who gets elected, nothing will improve in the United States over the next four years. Jobs aren't coming back. NDAA won't be repealed. Same-sex marriage will be legalized by the U.S. Supreme Court in 2013.

BOTH political parties are bought off and controlled by the globalists, Marxists, Communists, Zionists, Wall Street financiers (all linked to Freemasonry, Judaism, Mormonism and Kaballah). The connection between these groups are massive and widespread, but it all narrows down to Satan, who is the god of this evil world (2nd Corinthians 4:4). The Devil uses the love of money to buy men's souls (1st Timothy 6:10), just as he attempted to purchase even our Savior's soul in Matthew 4:9. Well, I'm not for sale, just as my Lord wasn't. And if you love Jesus Christ then you won't sell out either.

Neither Democrat nor Republican parties are legitimate. They alternate every 4-8 years to maintain a divided house in America. Jesus warned that a divided house cannot stand. Luke 11:17, “Every kingdom divided against itself is brought to desolation; and a house divided against a house falleth.” Our nation is falling! All of the political mud sling is staged for your deception. They're taught to make it look real, get nasty, but don't disclose the truth about critical issues.

Do you think it is a coincidence that Big Bird was even injected into the recent political debate between Obama and Romney? Not on your life! That's all staged to distract Americans from real issues, like what really happened on September 11, 2001 in New York when the Trade Towers were professionally demolished from within by explosive charges throughout the buildings. WTC 7 never got hit by a plane, yet came down in 6.5 seconds! How do two planes bring down three buildings? WTC 7 was imploded to cause confusion, to make the lie even bigger. What a lying wonder!!!

While candidates debate the lack of jobs, Wall Street criminals continue to run our economy into the ground. Just one example of thousands is the big college scam in America. College Conspiracy Scam USA (absolutely unreal... you've got to see this). Students are eagerly given massive loans, which the banks know they can never repay. The banksters couldn't care less, because the American taxpayer is footed the bill in the form of more reckless debt-spending (bailouts). The banks get their money NOW, but our children and their children will inherit the debt LATER. The more money they print, the less it is worth, just like everybody having a worthless college degree these days.

What's the worth of having a college degree if everyone has one? A century ago only 4% of Americans had college degrees. It meant something back then to have a university degree. Today 70% of Americans have college diplomas, are in massive debt because of their school loan, and can't find a job making more than $10 an hour. Yet, idiots keep cheering and voting for the charlatans, conmen and liars! It's like they're saying, “Yes, Obama, we worship you, keep lying to us, sell us out, cheat us, rob us, hurt us, we are your loyal supporters!” Do you think I'm kidding?

I recently heard thousands of people cheering for President Obama in Wisconsin. Mr. Obama has lied about everything except giving more rights to same-sex couples. The most treasonous thing Obama has done is sign NDAA into law on December 31, 2011. As a Christian and a tax-paying American, I am against the lying, deceiving, cheating and harming of the American people by our entrusted leaders. Sin begets more sin and eventually leads to evil (premeditated sin). America has become a very evil nation, that is, people plan to sin these days.

As a Christian I desire to think right, live right and do right for my precious Savior, Jesus Christ. I fear God. As Brother Roloff says, “The only thing I fear is God's disfavor. My only desire is Christ's righteousness.” I fail every day in one way or another as a Christian to please God, but I want to do better with God's help. We all mess up. I have received many e-mails from people who are struggling with sin and I want to encourage you all that there's no perfect Christians. None of us is a shining example of what a Christian should be. Read this Scripture if you think you're a hot-shot Christian...

1st Timothy 5:24-25, “Some men's sins are open beforehand, going before to judgment; and some men they follow after. Likewise also the good works of some are manifest beforehand; and they that are otherwise cannot be hid.”

Notice that our good does not go unnoticed by God. If you do not receive recognition now for doing good, then you will receive it in eternity...

1st Timothy 5:25, “...Likewise also the good works of some are manifest beforehand; and they that are otherwise cannot be hid.”

Mormonism & John MacArthur Have Another Gospel

Proverb 17:13, “Whoso rewardeth evil for good, evil shall not depart from his house.”