Holding the Truth in Unrighteousness

"For the wrath of God is revealed from heaven against all ungodliness and unrighteousness of men, who hold the truth in unrighteousness." —Romans 1:18

What a powerful statement... who HOLD THE TRUTH in unrighteousness. It is easy for us as believers to feel that we haven't done enough to win the lost to Christ; but the truth is that... the grace of God that bringeth salvation hath appeared to all men (Titus 2:11). There are NO EXCUSES. This is plainly stated in Romans 1:20, "For the invisible things of him from the creation of the world are clearly seen, being understood by the things that are made, even his eternal power and Godhead; so that they are without excuse." God is a Just God. We are the problem, not God.

America has indicted itself, proving Romans 1:18 to be true by naming Las Vegas Sin City. They know what they're doing is sin. They admit it boldly, and without apology. Americans exclaim... “Yes God, we are deliberately sinning, and we don't care. In your face God!” Americans are a sinfully proud, arrogant and stubborn people, who love sin more than God. "Then beware lest thou forget the LORD...," Deuteronomy 6:12. America has not only forgotten the God of the Bible, our nation deliberately REJECTED His Word in 1963 when the Bible and prayer were banned from our school system. That decision by the Supreme Court was the nails in our coffin as a nation. The word “forgot” in Deuteronomy is the Hebrew word shâkach shâkêach and means to “mislay, that is, to be oblivious of.” Americans haven't merely misplaced God's Word through prosperity and blind ambition, but rather, hardened sinners have told God to get out, and take that Book with You!!! The rest of us stood back and said, ok, to the destruction of our way of life and our children's future.

We have become a characterless nation of complainers and pleasure-seekers. Where are the righteousness who seek and defend the truth? Where is the God-fearing women who obeys her husband and wears modest clothing? Where is the Christian man who values fidelity, honor and the chastening of the Lord?

We are a nation who holds the truth of God in our unrighteousness...

Those homosexuals mocking God above know that they're hellbound, but couldn't care less. It's a joke to them! We have the truth; but we willfully reject it. The problem today is not sincere ignorance; but deliberate ignorance, indifference and wickedness. Study Hosea 4:6 carefully and you'll discover that God's people weren't destroyed for a lack of knowledge from ignorance; but rather, they REJECTED the knowledge of God. Read the whole Verse!

We have become so apostate and hardened nowadays that we refer to good things as being "wicked." For example: Here's a Google search for the phrase, "wicked dude!" Satan is effectively confusing young people today by redefining Biblical terms; thus removing the only words in society that demonize sin.

I recently went through a MacDonald's drive-thru and was offended by their advertisement for "wicked" Happy Meal toys.  It is a sin to misuse Biblical words. People often call their food "sinfully delicious," but this is wrong. Sin is a serious matter with God, and we shouldn't make light of it. TV's late night shows continually sport and joke about homosexuality, adultery, and every sexual sin imaginable; but God says... fools make a mock at sin (Proverb 14:9). We are living in a nation of fools. Sin sends people to Hell and is a serious matter.

"The National Highway Traffic Safety Administration's (NHTSA) position on the relationship between blood alcohol concentration and driving is that driving performance degrades after just one drink."

So if that be true, then why are drivers allowed to drive at all after having a few beers? It's because we hold the truth in unrighteousness. People are dying every day because of drunk-drivers; yet alcohol remains legal because of the love of money. We hold the truth in unrighteousness. There is no bigger lie in America than the false notion that you can drink alcohol responsibly. Even if you're not going to drive, your ability to cope as an adult is impaired after just ONE drink. Think about that.

Shame on disgraceful celebrities like Toby Keith who glorify getting drunk. A song that has recently hit the top of the country music charts is GET DRUNK AND BE SOMEBODY by singer Toby Keith. When I first heard the song, I couldn't help but think of all the innocent people who have been victimized by a drunk driver, and how they would feel after hearing such a foolish and horrible song. Here is the chorus to the song...

Be somebody? Are you an idiot? Do you really think getting drunk makes you a somebody? This is just further evidence of the apostate condition in America. Mr. Keith recently produced an album titled, White Trash With Money. Toby Keith has produced some of the filthiest, most lascivious, sexually degenerate MTV videos. Yet, Mr. Keith has millions of apostate loyal fans. We have forgotten God!

We are a nation of self-indulgent gluttons, who glorify getting drunk and living in sin. I've never understood the self-gratification that people receive from bragging to others that they got drunk, danced naked on the roof, woke up in a stranger's apartment, puked on their neighbors lawn, or drove their car through the garage door. Oh boy, sounds like fun doesn't it? Idiots! We are living in a nation of unrepentant sinners, who glory in their wickedness, and snub their noses at God Almighty in sinful stubbornness and pride.

Can you imagine a wicked nation who brutally murderers tens-of-millions of it's own children? Such wickedness is unthinkable! We're talking about America! Even worse, we snub our noses at God and brag about our sins...

Above: A feminist woman prides herself is having murdered her child. She condemns herself by admitting that she has sinned against God. If it were not a sin, then she would not have made such a self-incriminating T-shirt to deal with her guilt.

Should it be surprising that we would also torture poor Terri Schiavo to death? Not at all. We have become a culture of death. 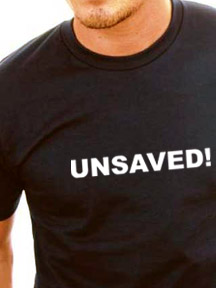 Above: An unsaved man condemns himself by openly admitting that he is a Christ-rejecter. You see, he holds the truth in unrighteousness, just as Romans 1:18 states.

We have lost our soul as a nation, we have been demonically desensitized by the Hellivision. We hold God's Truth in our unrighteousness. The fact that Americans flock to SIN CITY condemns them. They know exactly why they're going to Las Vegas... to commit sin.

We Americans are past feeling anymore...

"Who being past feeling have given themselves over unto lasciviousness, to work all uncleanness with greediness." —Ephesians 4:19

What Happens In Vegas, Is RECORDED In Heaven!!!