Acts 13:10, "And said, O full of all subtilty and all mischief, thou child of the devil, thou enemy of all righteousness, wilt thou not cease to pervert the right ways of the Lord?"

Tens-of-millions of people around the world sinfully idolized Ronnie James Dio, who led multitudes away from God into heathendom. In an interview, Ronnie James Dio expressed his doubts as to whether the Bible is true or not . . .

FT : Do you have many thoughts on politics and religion ?

I don't dote on religion. Religion, I think, is something that you can never argue, and you can certainly never convince the other person because even though there's a bible -- how concrete is it? It depends on the point of view. So religion is not something I'm involved in, other than the fact that having been in BLACK SABBATH it seems like there's a connection. I just think there's a lot of similes and metaphors and things that have gotten me to that point. Religion, much like fantasy, much like the tales of King Arthur is, again, something that is so difficult to put a hand on and say "this actually happened." It's such a matter of belief that you're really dealing in the same kind of properties. My fantasy writing is coupled with some religious overtones as well because they are part and partial to, again -- they're not the same thing, but you see what I mean. ...

Ronnie James Dio, just as most unsaved people in the world, saw faith in God and Christianity as fantasy. Admittedly in the preceding quote, Ronnie James Dio says that the BLACK SABBATH band was his religion. So true! It is the religion of Satanism! BLACK SABBATH was a pure Satan worshipping band! In the demonic song IRON MAN, Ozzy sings that Satan
“kills those he wants saved.” Just as churches have pastors to lead the flock in the ways of the Lord, so does Satan use Rock 'N' Roll idols to teach and lead young people into Satanism, immorality, substance abuse and rebellion against God.

Satan is so subtle, a deceiver, as are his servants. Ozzy Osbourne has repeatedly tried to downplay his Satanic music and album imagery as mere marketing techniques. Who's kidding who Ozzy? The Eagle's have also denied that their Hotel California album and song are a tribute to the Church of Satan. Yet, Alton LaVey (the Church of Satan founder) is standing in the balcony on the back of the album cover. 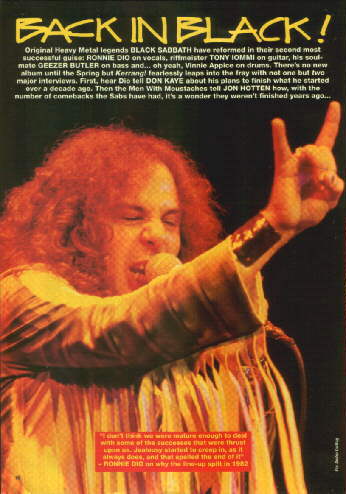 The one who forever will be the man on the silver mountain lost his battle with stomach cancer died at 7:45 on the morning of May 16.

Dio began singing in bands when he was only 13. By the early Seventies, he was the singer of Elf and became the lead vocalist for Ritchie Blackmore's new project upon leaving Deep Purple-some band called Rainbow, who had a hit with "Man on the Silver Mountain" in 1975.

Dio left Rainbow to begin his new gig with Black Sabbath and recorded the infamous album Heaven and Hell, which was released in 1980.

After recording two albums with Tony Iommi, Bill Ward and Geezer Butler, Dio pursued a solo career and released Holy Diver under his own name in 1983-he found instant success with tunes like Don't Talk To Strangers, Stand Up And Shout and of course, the title track.

The albums which followed Holy Diver proved that Ronnie could do it on his own, most notably The Last in Line and Dream Evil.

Dio returned to Sabbath for a short time in 1992 when the band recorded Dehumanizer, but arguments with Iommi sent him packing again. Ronnie didn't return until after the turn of the Millennium, when he, his long-time drummer, Vinny Appice, Iommi and Geezer Butler began touring as Heaven and Hell.

I wouldn't want to stand in Mr. Padavona's shoes on Judgment Day for all the wealth, fame and pleasures this sin-cursed world has to offer. It is tragic that so many sinners reject the gift of God. Ronnie James Dio thought the Scriptures were fantasy; but he sure believed in Satanism with all his heart. Mr. Padavona said he didn't know if God's Word was “concrete”; yet he unquestionably accepted Satanism and praised the Devil throughout his musical career. The truth is that Mr. Padavona KNEW he was worshipping the Devil. He shamelessly flashed the horned Devil sign everywhere he went, showing his awareness of who he served.

The lyrics in their music that blasphemes the Scriptures clearly shows their hatred and contempt for the God of the Bible. It's telling that a person who claims he didn't know whether or not the Bible was “concrete” enough for him, would spend his entire musical career singing songs blaspheming that holy Book. That's like avowed atheist, Madalyn Murray O'Hair, who spent her entire life fighting against the God she claimed she didn't believe exists.

Ronnie James Dio unquestionably worshipped the Devil. Think about something... all Satanists, occultists, witches, secret societies, astrologers, heavy metal rockers and other demonic groups don't fight against each other. BUT, you've got all these different so-called Christian religions fighting against each other. That is eye-opening! To understand why this occurs is found in 2nd Corinthians 11:13-14, “For such are false apostles, deceitful workers, transforming themselves into the apostles of Christ. And no marvel; for Satan himself is transformed into an angel of light.”

In this July 7, 2007 photo above, Ronnie James Dio performs with British heavy metal group "Heaven and Hell" during the 41th Montreux Jazz Festival in Montreux, Switzerland. Dio, the metal god who replaced Ozzy Osbourne in Black Sabbath and later piloted the bands Heaven & Hell and Dio, died Sunday, May 16, 2010, according to his wife and manager. He was 67. (AP Photo/Keystone, Sandro Campardo, File)

All of the Devil worshipping groups are on the same team. Witches don't fight with occultists. New Agers don't fight with psychics. Astrologers don't fight with Satanists. However, a raging battle exists on the religious front. This is because Satan is a deceiver and a liar (John 8:44; 10:10). Satan desires to corrupt the Bible, infiltrate the Church with doctrines of devils and pervert the gospel of Jesus Christ. False religions abound everywhere because Satan wants to deceive the masses into Hell. Jesus warned us about wolves who come to us in sheep's clothing (Matthew 7:15).

Ronnie James Dio spoke of religion as something confusing and unworthy of debate because he didn't know if the Bible was trustworthy. That's all a smokescreen. That's what Satan wants you to believe. It's easy for a willful unbeliever to condemn Christianity as something confusing because no one can agree as to which is the right path to follow. The truth is that the Biblical gospel cuts through all the religion, gets right to the point, and simplifies the entire matter instantly.

It's simple to be saved. You come as a SINNER and you trust upon the SAVIOR to be forgiven. Jesus paid a debt that He did not owe, because we owed a debt that we could not pay. There is NO religion involved in salvation. There is NO ceremonies, rituals nor self-righteous requirements. No, salvation is of the Lord alone. Salvation is receiving, not giving. We simply receive the gift of God through faith in Jesus, the Christ, the Son of God. This is the entire reason for which the Gospel of John was written, “But these are written, that ye might believe that Jesus is the Christ, the Son of God; and that believing ye might have life through his name” (John 20:31).

Ronnie James Dio sang a tribute album and song of the same title to Black Sabbath called, HEAVEN AND HELL...

These black magicians sing about the Illuminati right in your face, witchcraft lyrics, funding your enemy (the globalists) and manipulating your consciousness...

Well if it seems to be real, it's illusion
For every moment of truth, there's confusion in life
Love can be seen as the answer, but nobody bleeds for the dancer

Killing is their business and business is good. If it seems to be real, it's illusion. Love can be seen as the answer, but nobody bleeds for the dancer. These type of lyrics are straight out of the illuminati textbook. You don't keep the gold in Las Vegas, they take the gold out of you!!! You've got to bleed for love!!! The globalists are always trying to keep you in darkness, deceived and suppressed. They do NOT want you to become aware.

Seek information and learn about history and you'll find the truth if you want it. Most people are not truth-seekers, they are not saved, and they couldn't care less about anything except enjoy life. That is a heathen attitude. Christians ought to preach the truth more than anybody; but sadly, today's professed Christians are worldly and woefully ignorant concerning what's really going on in the world. From Hollywood, television, the newsmedia, public schools, best-selling books, to the music industry... people are being deceived by Satan's crowd. It's basic programming! Open your eyes, because it's everywhere. People want to imitate things that they've seen on TV. People are so predictable (and the Devil knows it).

The New World Order system is an extermination grid. They want to kill us before we grow old, because people wake up when many spiritually awaken before they die...

They say that life's a carousel
Spinning fast, you've got to ride it well
The world is full of Kings and Queens
Who blind your eyes and steal your dreams

Ronnie James Dio admitted in his music that the public is blinded by their leaders. Satan is the god of this evil world and controls the elite who worship him through occult organizations. This is why Winston Churchill was a druid witch. This is why both presidents Bush Sr. and Bush Jr. are members of Bohemian Grove and Skull and Bones. This is why many leaders are members of Freemasonry. The occult is synonymous with Satan worship, evil and deceit. The New World Order are people trying to play God, using social and chemical control (even lethal and inhuman methods of manipulation to test various systems of control). The global ruling class believe that they are a separate species from common man, privileged to decide who lives and who dies.

In sharp contrast, the Bible is open to the world to read and study. God has nothing to hide.

The elite who control the world for Satan are deceived themselves, for no one would serve evil if they truly understood what awaits them in everlasting damnation in the Lake of Fire (Revelation 20:15). The New World Order is all about manipulation, keeping people blinded to the truth (2nd Corinthians 4:4). The Rock music industry is 100% owned and controlled by illuminati globalists, Luciferian worshippers who openly praise the Devil through music.

Most honest people would admit that they like Rock 'N' Roll music and other forms of worldly music, but it's important that you realize and fully understand that Satan is a master deceiver who uses music and television to control, deceive, manipulate, corrupt and lead people into darkness away from the God of the Scriptures.