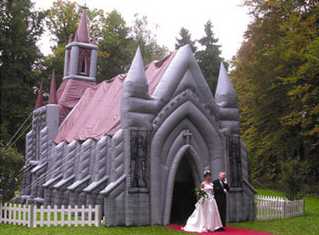 I couldn't believe this when I saw it... people are now getting married in blow-up wedding chapels!  The wedding in the photo to the right took place in Dos Picos Park in Ramona, California.  I guess it shouldn't be too shocking in a generation that worships the "i-God."  I doubt if we'll ever see any inflatable court rooms where people can get divorced.  It has always disturbed me that a couple can get married anywhere--on a plane, underwater, in a boat, on a mountain, even on a rollercoaster; but you can only get divorced in ONE PLACE... in a COURT OF LAW!  Ok, here's something even crazier... drive thru weddings!  Who would have imagined in their wildest dreams 100 years ago that people today would be getting married in their car, at a drive thru wedding chapel?  Can you honestly tell me that we're not living in the end times?

I recently heard that public school teachers are instructing kids to conserve water by placing rock filled containers into their toilets.  Never mind the millions of babies being slaughtered by abortion--SAVE THE WATER!  America has gone insane.  Who would have that there would come a day in America when we would see televised horse rectum eating contests?  Do you think this insanity please the Lord?  Do you think God is pleased that Gene Simmons, lead singer of the vile rock-n-roll band KISS, is praised by millions of Americans?  Gene Simmons has publicly bragged on national TV that he has fornicated with over 4,600 women!  Now Mr. Simmons even has his own TV special, focusing on his godless lifestyle.  On Simmons' website, there's a waiting list of women waiting to fornicate with him.  The average America could care less about such immoral behavior.  As Christians, we are Biblically commanded to speak out against such evils (Psalm 94:16; Ephesians 5:11).  I say this not to be unkind, but to protect our children from such evil influences.

What has America come to when adultery is publicly praised in TV shows like Desperate Housewives, when witchcraft is publicly praised in TV shows like Sabrina the Witch and Charmed, when homosexuality is openly praised in TV shows like Ellen, Ugly Betty, and Inconceivable?  Americans have forgotten the Lord Jesus Christ.  People say they trust Jesus while lusting, boozing, gambling, fornicating, cursing, and living in all sorts of sin.  This is the same thing that the Israelites were guilty of in Jeremiah 7:9-10... "Will ye steal, murder, and commit adultery, and swear falsely, and burn incense unto Baal, and walk after other gods whom ye know not; And come and stand before me in this house, which is called by my name, and say, We are delivered to do all these abominations?"  It seems that everybody nowadays is perverting the Bible in an attempt to justify their sins.  Try as they may, sin will always be sin in God's eyes.  The Word of God is incontrovertible!  That is... impossible to deny or disprove!  Thousands have tried to discredit the Word of God, and all have utterly failed.

Virtue means little to women these days.  In 1904, 95% of all babies were born in the home.  Today, nearly all children are born in hospitals.  It is SINFUL for a male doctor to see the nakedness of a pregnant woman.  It is very wrong.  A woman's private area should only be seen by her husband.  Men doctors should not look upon the private area of another man's wife.  Society has become so amoral (i.e., lacking moral standards or principles) that such reasoning is scorned with sinful laughter.  America is one of the most perverted, sexually degenerated, sin-loving nations on earth--and God is going to judge America!  Even now we are seeing the imminent collapse of our once great nation.  The total of federal tax revenues collected now don't even cover the interest we owe as a nation!  Our dollar is literally becoming worth-less.  America has plunged over a moral waterfall into the depths of Hell.  God is angry (Psalm 7:11).

I can't say that getting married in an inflatable chapel is sinful; but it is definitely uncouth.  It's just a sign of the times in which we are living.  Marriage to many people, just as Christmas and so many other things, has lost it's meaning and sacredness.