Satan is alive and well... 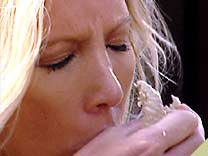 Ask Fear Factor contestants what it's like to eat horse rectum and odds are they'll tell you it just plain stinks. Here's contestant Holli Joy Lamb to butt in with her whole story…

FEAR FACTOR: What did you think when Joe Rogan revealed that you'd be eating horse rectum?

HOLLI JOY LAMB: When Joe pulled out the horse rectum and he told us what it was, I didn't think that we were going to be able to perform the stunt. Because, initially, I did not think I would be able to even take one bite, never mind eat over a foot of it.

FEAR FACTOR: Was it helpful that you didn't have to go first?

HOLLI JOY LAMB: [Contestant Nicole Sintihakis] had referred to it as tasting like chicken so, I thought, "Well, maybe if I just kept that in my mind, it wouldn't be so bad and I'd actually be able to do it." However, eating the horse rectum was exactly what it sounded like. I mean, there was no chicken tasting involved. It tasted exactly like a horse's ass.

FEAR FACTOR: What about the smell? Did that make it worse?

HOLLI JOY LAMB: I mean the smell was just as bad as the taste. That was one strategy thing I was trying to do, to keep the pile of rectum away from my mouth and tear off small pieces. Because if I held it up close to my face like Nicole had been doing, the smell would have overwhelmed me.

FEAR FACTOR: Once you got rid of the smell factor, what was your next step to overcome?

HOLLI JOY LAMB: As I progressively started eating the rectum I kept noticing how hard it was to separate the tissue for me. And I actually started getting really nervous about choking because I saw that as such a big factor in eating it. I pretty much was almost guaranteeing myself that I was going to choke on this…horribly. That was the biggest problem that I was having…swallowing it. But I was trying to keep my mind distant as much as possible. But it's hard. I never expected to be able to eat over a foot of the rectum.

FEAR FACTOR: Was it difficult to chew?

FEAR FACTOR: What part of the rectum was the hardest to get down?

HOLLI JOY LAMB: Every time I gagged was when I consumed these juicy little jelly balls. I don't know what they were. But they were these balls that, when you crunch down, they just exploded in your mouth. And that's every single time that my body just said, "No." And I gagged, basically. It was absolutely disgusting. Tearing apart the pieces, just ripping them through my fingers, I could feel the different layers. And it was so juicy and warm. And it was nauseating. It was exactly what you would think horse rectum would be like.