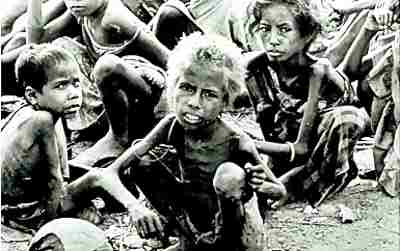 Is it nothing to you friend that children are dying of starvation all around the world?  While the USA was busy bombing Afghanistan, The White House was simultaneously assuring the American people that we were helping the Afghan people with humanitarian aid (dropping food and supplies from the air).  Unfortunately, as soon as the Taliban was removed from power, the Afghan people were abandoned and left at the mercy of tyrants and rapists.  The Northern Alliance has a history as bad as the Taliban.  There is not enough food.  Many are starving and children there suffer from diseases which are easily curable.  One out of four children die before reaching age five.  Yet $2,300,000,000 worth of opium (heroine) was produced in Afghanistan in 2003.  So while Afghan children are dying, billions of dollars in opium are being produced each year for a bunch of filthy rich monsters.  Is it nothing to you?  Also, Read "Killing Them Softly - Starvation and Dollar Bills for Afghan Kids."

"There is a generation, whose teeth are as swords, and their jaw teeth as knives, to devour the poor from off the earth, and the needy from among men." -Proverb 30:14

Sounds like the globalists to me (the World Bank, UNFPA, IMF, WTO, etc).  Is it nothing to you that Americans spend billions of dollars every year on their dogs and cats while children by the millions are dying in other countries due to lack of food and vitamins?  There is a genocide going on in this word!  UNFPA wants to eliminate your baby!   And guess who's paying for these anti-population programs?  The average American is so woefully ignorant of the truth!   Educate Yourself!   Read about Planned Parenthood (Murderhood) founder (murderer), Margaret Sanger.  Is it nothing to you that the poor are being DEVOURED from off the face of the earth?  Read Starving Terrorism or Children?  It's sickening!  Is it nothing to you that children are living in the streets throughout places like Mexico City, begging for crumbs from wealthy American travelers?

Is it nothing to you that war and suffering have destroyed so many innocent lives?  America is guilty of neglecting the poor.  The US government is wasting unbelievable amounts of money on nonsense (like the $600,000 spent to study the sex-habits of squirrels).  It is appalling to learn where our government spends a lot of OUR MONEY.  Isn't it ironic that mankind will put men on the moon and robots on Mars, but won't feed starving children here on earth.  I realize that some people are starving because of the evil dictatorship type governments over them, but that's not the case in MOST of the places where children are starving to death.  The rich nations of the world could care LESS.  Where is the unbelievably rich Catholic religion with all their Billions?  Where are the multi-billionaires?

"He that giveth unto the poor shall not lack: but he that hideth his eyes shall have many a curse." -Proverb 28:27

The Bible pronounces a CURSE on anyone who looks the other way while people are in need (let alone starving to death).  America's greatest sin is perhaps HIDING HER EYES from the world's poor.  Is it any wonder why America is falling apart?  Poor people are dying by the millions all around the world while Americans stuff them selves with an overabundance of food and pamper them selves with all sorts of entertainments and toys.  Obesity is an increasingly common problem in America.   Is it nothing to you that children are starving in other countries?

"The righteous considereth the cause of the poor: but the wicked regardeth not to know it." -Proverb 29:7

Let's just face it, America has become SELFISH!  We have become a selfish, self-righteous, self-conscious and self-centered nation.  When we give with one hand as a nation, we take with the other.

"He that hath pity upon the poor lendeth unto the LORD; and that which he hath given will he pay him again." -Proverb 19:17

When you give unto the poor, you are lending it to God and He has promised to repay you.  What a wonderful God!

"He that despiseth his neighbour sinneth: but he that hath mercy on the poor, happy is he." -Proverb 14:21

Stop looking at what the Jones's have that you don't.  Start looking at what you DO have and how you can help those who are less fortunate.  Do you want to be truly happy?  If so, then help the poor.  There are many folks less fortunate than we are in this world, we can be a blessing to them.  By the way, I would never give money to any charitable organization that paid anyone a six-digit salary.  I would demand to know exactly where my dollars were going!  So be careful where you donate money or some child may starve.  Also, I firmly believe in preaching the gospel to the people being helped.  I would try to donate money to an organization that believes preaching the gospel is a top priority.  What good is it to save a man's life just to forget about his soul?  Death is inevitable in the long run, so we must warn people of the coming judgment if they don't accept Jesus Christ as their personal Saviour.   Of course, if a person trusts upon the Lord Jesus Christ for the forgiveness of sins, then his sins are washed away forever by Jesus' blood.

You can raise your children for the Lord.  You can warn your friends and try to open their eyes to the truth.  You can give out gospel tracts.  You can start a website.  You can speak out against the moral chaos and perversion of our day.  You can protest at your local Planned Parenthood (Murderhood) abortion clinic.  Start a website.  Start a new ministry.  Start a tract ministry.  Write your own tracts.  become a pastor.  Become a Christian school teacher.  Ask God to open your mind with ideas how to reach others with the truth.  Support your local Independent Baptist Church.  Yes my friend, you can do so very much for the Lord if you will set your heart and mind to it.  You need to get MAD (Make A Difference).  There is so much you can do for God.  Or is it nothing to you?

The following words are from Dr. Jack Hyles' sermon "Others" preached on September 29th, 1974 at the great First Baptist Church of Hammond, Indiana...

"I read biographies a great deal.  Especially in the early, formative days of my ministry, so very often did I read biographies.  I have read about the lives of most great men. One of my favorite characters in all of history is General William Booth. General Booth was the founder of the great Salvation Army, when it was more salvation than it was army.  He led in spreading the Gospel over much of the world, as he organized street meetings and evangelistic services.

With the passing of the years, General Booth became an invalid.  His eyesight failed him, and one year he was in such bad health that he was unable to attend the Salvation Army Convention in London, England.  Somebody suggested that General Booth send a telegram or a message to be read at the opening of the convention.  General Booth agreed to do so.

When the thousands of delegates met, the moderator announced that General Booth would not be able to be present because of failing health and eyesight. Gloom and pessimism swept across the floor of the convention.  A little light dispelled some of the darkness when the moderator announced that General Booth had sent a message to be read with the opening of the first session.  He opened the message and began to read the following:

Lord let me live from day to day,
In such a self-forgetful way,
That even when I kneel to pray,
My prayer shall be for others.
Others, Lord, yes, others;
Let this my motto be.
Help me to live for others
That I may live like Thee."