One woman's return to Somalia reveals the hidden victims of the "War on Terrorism."

A year after the terrorist attacks in America on September 11th, many Islamic nations around the World are facing increasing problems and conflicting pressures. Somalia, a country already destroyed by years of civil war and anarchy, has found itself further crippled by George W. Bush's "War on Terror". Not through war. Not through politics. But by shutting down the transfer agents who send money from Somalis around the world back to their families, the FBI have effectively cut the country off from one of its main sources of income.

In the wake of September 11th, US investigators sought to break up all sources of Islamic fundamentalist threat to the United States, by "starving terrorism of funds". Money transfer agents, or hawalas, were identified as a potential source of income for al-Quaeda. The largest of them, al-Barakaat, with operations in 40 countries sending money to 60 offices in Somalia, has been hardest hit, with many of its offices closed down. Although nothing has been proven, the organization is suspected of siphoning money off to terrorists, and facilitating the undetected movement of money to cells around the world. Smaller hawalas are also suffering from the far-reaching effects of the new US International Economic Emergency Powers Act that authorizes the blocking of assets of persons and entities providing funds to foreign nationals alleged to be supporting terrorism. In spite of in depth investigations, no evidence has been discovered. Yet the closure is still enforced. 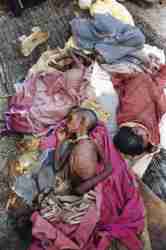 Back in Somalia, the effect on the people has been devastating. The East African country's infrastructure has been destroyed by years of civil war. Employment is rare and unstable. Residents rely heavily on the income sent from family abroad through hawalas. Not only have money transfers been prevented, but many bank accounts have been frozen too. In these times of desperation, people cannot even access whatever savings they may have.

In the climate of fear and suspicion following September 11, some Somalis are reluctant to use the transfer agents that remain open, for fear of being accused of terrorism by the US. The images of prisoners held in Camp X-Ray have struck fear into the hearts of many, who think that they could be held indefinitely without trial, possibly tortured, and probably never heard from again. The flurry of unsubstantiated accusations and heavy-handed reaction this last year has left Islamic communities all over the world wary of association with anything that has come under US investigation.

Many Somalis living in the US have asked their friends and family not to contact them, to avoid suspicion of being in league with "terrorists". The fear that the victims of this war will be the innocent is strong all over the globe.

In the capital Mogadishu, sentiment towards America is far from sympathetic. The memory of the US's 1993 hunt for the warlord General Aideed still burns because almost everyone has lost a family member or a limb in the bombing. Now those who had previously never heard of al-Quaeda, or cared about religious fundamentalism, have come to see it as symbolic of resistance to their American oppressors. In this sense at least, the international crackdown has backfired.

The new government, recently installed after 10 years of complete and utter anarchy under battling warlords, has a big job ahead of it. Rubbish stays wherever it is left as there is no waste system. The water supply has effectively been "privatized"- by people with guns. Even for the few who can afford it, there is no electricity after 10 pm. The cost of everything is extortionate. Healthcare is carried out on obsolete equipment by exhausted staff. Doctors are forced to either secretly treat people for free, or turn sick people with no money away. Parts of the country are still controlled by warlords. Farmers fear their crops will be stolen and so are reluctant to plant. And now with the major source of income in the country stopped, the informal employment infrastructure surrounding food and services is drying up too.

This summer Mulki Omar, mother of eight, returned to Somalia after living in North London for 12 years. The city and home she saw was unrecognizable. During the 1993 US bombing, her family home was reduced to rubble, and her sister blown apart. In her dying moments, her sister asked the family not to risk their lives by venturing outside into the bombing to find a doctor or to bury her. Islam requires the body to be buried within 24 hours of death. So she was buried by the front door of the house, and she remains there as a constant reminder to the family. Theirs was one of the few houses rebuilt after the bombing. But much of Mogadishu has remained as rubble for nine years.

Their family has been badly affected by the closure of the hawalas. The money she usually sends to her father no longer arrives, and his bank account has been frozen. "My father gave his bank card to his granddaughter to play with." She says. "He doesn't believe he will see his money ever again."

Among Mogadishans whom she spoke to, there was agreement that the last year has seen lawlessness return to the streets with a vengeance. Even during the years of anarchy, Islamic law, or Sharia, was implemented by the people in the absence of any formal judiciary or police. Sentences were passed by the people according to Islam, and crimes were punished. A sense of order was able to establish itself.

But with the arrival of an ineffective interim government, and US pressure to crush anything of a strongly Islamic nature, the Sharia law has disappeared. And nothing has replaced it. Now muggings, killings and kidnappings are on the rise, and once again people fear to go out onto the streets.

Islam has been linked to terrorism by Western powers, yet at the same time it is associated with peace, law and order by Muslims. This has served to confuse many Somalis. Puzzled people asked Mulki questions such as "What is terrorism? Who is a terrorist? Is al-Quaeda in London? Is it in your house?" The word "terrorism" is increasingly being misunderstood and misused, to the extent that those who identify with Islam might wonder if they too are terrorists.

Those who suffer most from times of war and poverty are always the children. With no schools, facilities or books available, there is no chance of an education to provide tools for Somalia's next generation. With unemployed parents, children go hungry. With the law of the gun on the streets, youngsters grow up respecting only guns. And for two generations now, Somalis have known nothing but war. The only thing feeding many families has been money sent from relatives living abroad. But with this source gone, what are Somalis to do, and how are their children to eat?

Years ago Bill Clinton said that their children's future was in the hands of Somalis. But few people really believe that the US has relinquished control. Foreign influence is still strongly felt, and widely blamed. With various warring factions funded by other nations still present in parts of the country, and the new interim government seen as weak, many Somalis wonder if they will ever have control over their own nation. Yet optimism prevails. A common theme is a yearning for peace, and the belief that one day the people will make things work. Mulki thinks that it is their faith in Islam that gives them this trust in the future.

Many Somalis living in London and the US however, can feel a sense of guilt about enjoying themselves while their families back home may not even be able to eat. Since the hawalas were closed, they feel even more helpless. But life as a Somali refugee is hardly easy. Here in London, strangers have branded Mulki's teenage children as terrorists, simply for being Muslim. Her husband, who has a beard, has been called Osama bin Laden.

The lack of inclusiveness towards refugees in this country is leading to inevitable social breakdown, and strains within Somali families. Without permission to work, fathers have lost the respect of their children. Mothers are depressed with trying to cope without the support of their families and under poor housing and health conditions. The children may well lag behind in classes, or take refuge in the growing influence of drugs on the estates. Qat, a leaf chewed socially by Somali men as a stimulant, is a legal drug that many wives worry is becoming a problem.

And yet while life for a British Somali may be hard, for a Mogadishan it is immeasurably harder. With the rest of the world barely aware or interested in the situation there, Mulki feels it is now a responsibility for herself and other Somalis living here to raise awareness and outrage. Punishing an entire nation for the unproven crimes of one organization is cruel and excessive. Allowing the association of a particular religion with crime is racist. But equating anti-Americanism with terrorism is very foolish.

"I know what the Islamic creed and belief is. According to that, I can't believe a practicing Muslim would cause that much harm and destruction [as September 11 2001]. What is sad though is that the first and last victims are Muslims because Islam has now been associated with terrorism."

So while the US continues to create innocent victims, it will continue to create enemies. When will they learn that by starving children they will only feed anger?

“There is a generation, whose teeth are as swords, and their jaw teeth as knives, to devour the poor from off the earth, and the needy from among men.”  —Proverb 30:14