It is sad and unfortunate that any Christian or Christian organization would endorse such an evil invention as Harry Potter.  The Bible clearly condemn any type of involvement with the wicked works of witchcraft.  I was sad to learn from one of my web visitors that Christianity Today magazine was endorsing Harry Potter.  I looked into the matter myself and it was confirmed.  Below is one such article on their website.  If you'll simply perform a site search on Christianity Today's website, you'll be sickened as any God-fearing Christian would be.  Harry Potter is evil and we should not endorse such wickedness.

The partial article below was taken from the following link:

First, I would like to say that I am proud to be a "stick-in-the-mud" for my Lord and Saviour, Jesus Christ.  Would to God that more believers were willing to be counted amongst the unpopular.  The Bible clearly admonishes all believers in 2 Timothy 3:12...

"Yea, and all that will live godly in Christ Jesus shall suffer persecution."

"Wherefore come out from among them, and be ye separate, saith the Lord, and touch not the unclean thing; and I will receive you," -2nd Corinthians 6:17

Did you read that..."Harry Potter, Sabrina The Teenage Witch, Buffy the Vampire Slayer, Charmed.  It seems we cant get enough of all things magical or 'witchy' at the moment. The result of all this interest is that Wicca has become the fastest growing religion in the UK."  Are you really stupid enough to believe that Harry Potter is harmless to children?  Evidently that folks at Christianity Today magazine are.  Even the witches themselves declare that Harry Potter is greatly influencing the masses.  Why are the churches silent?  Why does Christianity Today dip their sails and compromise?  I'll tell you why!  Because of the love of money, fear of persecution and a failure to walk with God.  We all need to get right with God! 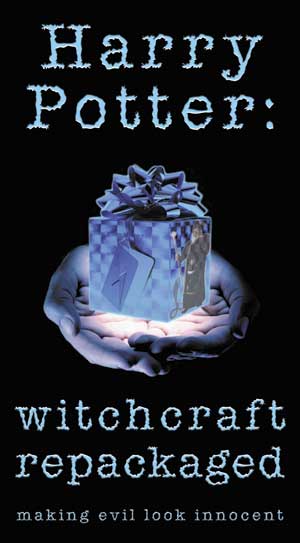 The Abomination of Harry Potter

“Harry in an absolute godsend to our cause,” said High Priest “Egan” of the First Church of Satan in Salem, MA.  “An organization like ours thrives on new blood - no pun intended - and we've had more applicants than we can handle lately."