So-called "trips to heaven," popularized by (among others) Betty Eadie's book "Embraced by the Light." 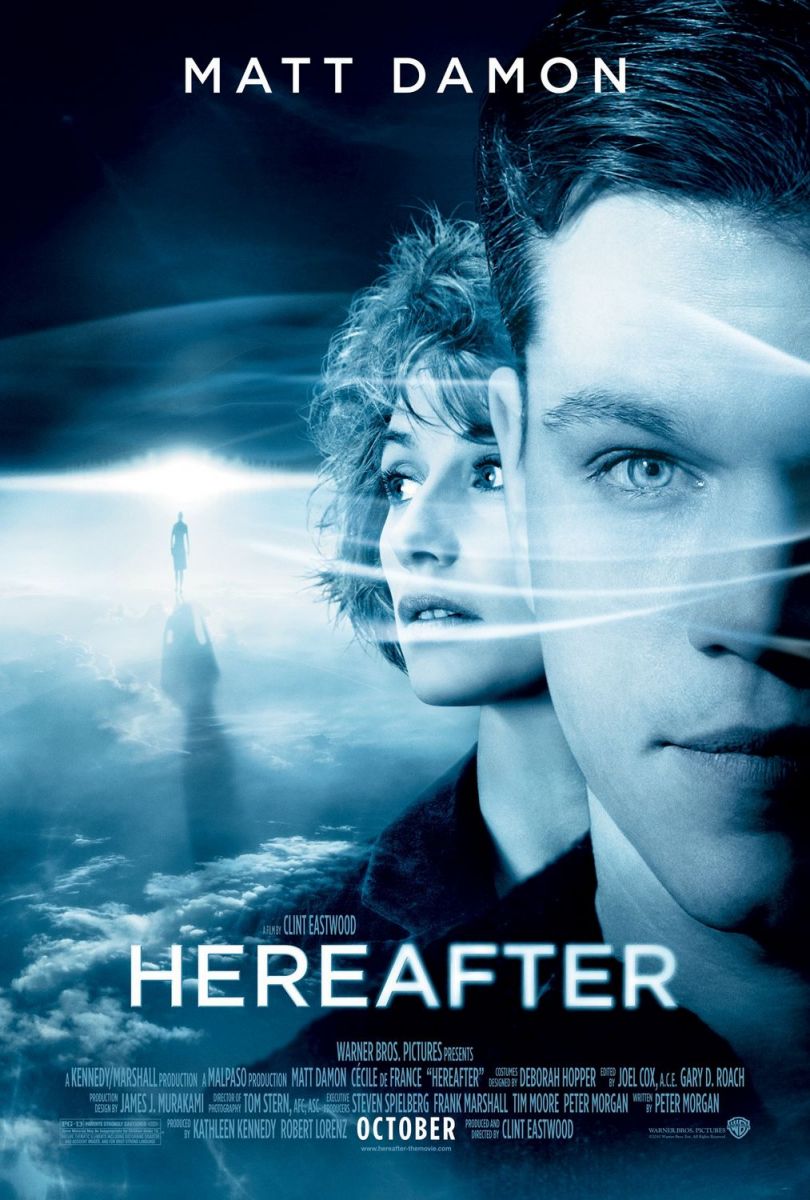 Near-death experiences (when patients on the operating table or close to drowning say they feel their spirit leaving their body), are caused by a normal psychological response to an intensely stressful experience, according to scientists.
Out of body - not out of mind, BBC, Feb. 4, 2000

Hollywood legend, Clint Eastwood, recently directed a controversial movie called HEREAFTER, which became an international sensation. Clint Eastwood Embraces New Age, Rejects Jesus Christ (says he likes Buddhism). The movie has brought much money to the psychic community, from sincere people who have lost loved ones to death and are lonely, missing them and wanting to communicate with them. You'd be surprised how many people do believe in the ability to communicate with their dead loved ones. Movies like THE SIXTH SENSE and HEREAFTER have led many people to believe in psychics. Of course, such communication is IMPOSSIBLE. The cursed Catholic Church has been lying to people for centuries, convincing them that they can pray and pay for their dead loved ones to escape purgatory in eternity. Biblically there is no such place as purgatory!

Once a person dies, their eternal destination is sealed eternally. There are no SECOND CHANCES after genuine death. Thousands of people have been pronounced clinically dead and then revived, even days later, with bizarre and strange stories to tell. These are called Near Death Experiences (NDE's). Is there any truth to these stories? Since we do not know, we should NOT place any weight upon them. It is dangerous to place any importance upon what those who have had NDE's have to say, because it is their word against that of the living and the Word of God. Jesus told us to search the Scriptures in John 5:39. Jesus didn't tell us to ask information from those who claim to have died and come back.

The heathen world today doesn't want to believe the Bible. Instead they spend money to buy all sorts of bizarre books written by men and women who've had religious or spiritual experiences. Instead they watch weirdoes like Oprah Winfrey (who thinks if your little girl wants to grow up to be a boy, let her). Oprah also invites all sorts of occultists, spiritists, New Agers and people who've had NDE's onto her show. But you'll never see a red-hot, Biblical, truth-telling preacher on Oprah's show!!! Satan's followers own and control the television networks. You either believe that the Bible is God's inspired (God breathed) Words or you don't. I believe that the King James Bible is God's Word.

All that matters in life is what the Bible teaches. God only holds us accountable for how we respond to His Words, that is, what we do with the Bible. I don't care what somebody who claims to have died, allegedly seen, and then comes back to sell a book to tell us about. I know that Hell has real fire. I know that Heaven is a literal place and has a street of gold and 12 gates of pearl. I know that Jesus is bodily in Heaven. I know that Hell is a literal place of torment. I don't need to hear it from someone who claims to have seen white lights, darkness, or green monsters with fangs. Personally, I don't place any weight upon anything such people have to say, and I don't believe any of it. Most of the stories are far from anything the Bible teaches. I think many of those people do experience something, but so do I when I go to sleep on a full stomach... nightmares and dreams alike! Many people have seen strange things while high on drugs. The point being is this, obey the Bible and forget what people have to say. God has a perfect batting-average!

I read the story of a man who was murdered by the KGB in an auto-attack and was in the morgue for 3 days. As the mortician made an incision 3-days later, George Rodonaia came back to life. There are umpteen websites devoted to these sort of stories, and no doubt many of those people are sincere in what they've experienced; but regardless, the Bible does not direct us to take advice from people who've allegedly come back from the dead (clinically revived). I believe that many people are pronounced dead and then moments or days later are revived, simply because it wasn't God's appointed time for them to die (Hebrews 9:27).

There are people who've jumped from tall buildings to kill themselves and survived the fall to tell about it, while others drop dead from the smell of lobster from an allergic reaction. When it's our time to go, that's it. No one can keep you alive when God says it's time; and no one can kill you until God says it's time. God determines who, how, where and when death comes. It may be within God's permissive will that a drunk driver pulls into your lane and kills you or a loved one; but nothing can happen without God's approval. This is why many people get angry and bitter against God; but we ought to trust God IN ALL THINGS, for he knows best as our heavenly Father.