2nd Peter 2:4, “For if God spared not the angels that sinned, but cast them down to hell, and delivered them into chains of darkness, to be reserved unto judgment.” 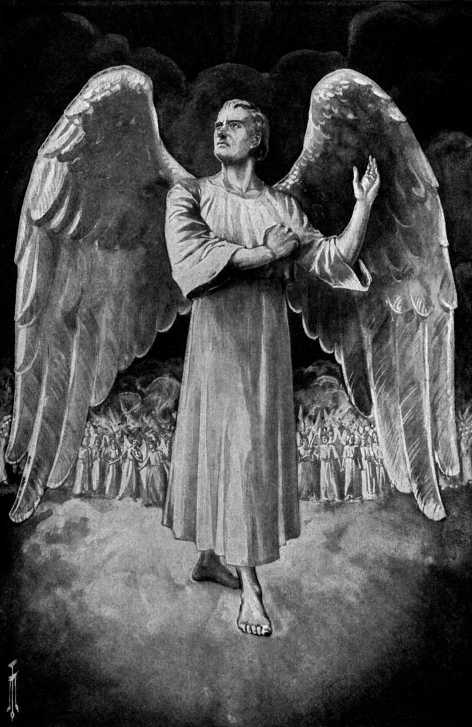 The Bible teaches in 2nd Peter 2:4 that God did not tolerate rebellion amongst the angels and cast them down to Hell. We read in Matthew 8:28-29 that not all the demons were confined to Hell, but dwell upon the earth. God bound some of the worst angels into Hell right away; but banned the others to the earth with Lucifer...

Matthew 8:28-29, “And when he was come to the other side into the country of the Gergesenes, there met him two possessed with devils, coming out of the tombs, exceeding fierce, so that no man might pass by that way. And, behold, they cried out, saying, What have we to do with thee, Jesus, thou Son of God? art thou come hither to torment us before the time?”

So some demons are bound in chains in Hell (Tartarus), reserved for judgment; and yet there are others still free to do evil upon the earth and afflict men's lives. We call them “fallen” angels, but actually they chose to rebel and then they were cast out of Heaven down to the earth. So they didn't fall in that sense. We call them “fallen” because of their fallen moral character.

There is no record in the Old Testament of rebellious angels being cast down to the earth. Clearly, they must have been cast down to a Pre-Adamic world. There is plenty of Scriptural evidences to support this doctrine:

Carefully notice that Lucifer dwelt upon the earth prior to his rebellion. Isaiah 14:14, “I will ascend above the heights of the clouds; I will be like the most High.” Lucifer's sin was wanting EQUALITY with God. This is the same sin of feminists today, who want to be EQUAL with male authority in marriage, home, church and society. God has ordained masculine authority in the humanity. Women are equal in worth, intelligence and importance to God; but the man is to lead, not the woman.

When Lucifer sinned, he wasn't punished by God. We know that Lucifer wasn't banned from Heaven because Satan appears before God in Job 1:6-7. Satan will be judged, convicted and punished at The Great White Throne Of Judgment with the rest of the wicked (Revelation 20:11-15). Satan will be cast into the Lake of Fire (Gehenna - Hell) forever to burn and be tormented night and day without rest. 2nd Peter 2:4 also tells us that the angels bound in Hell are RESERVED unto judgment. So neither the Devil nor the demons have been punished yet for their wickedness.

Ezekiel 28:13-19 teaches that Lucifer was stripped of his heavenly position, authority and glory when he rebelled against God in seeking equality. Earth became Satan's new home. It is commonly believed (and I disagree) that Satan in his anger and rage destroyed the earth. In fact (and you're about to be amazed), God destroyed the earth in His own anger. Yes, that's right, GOD DESTROYED THE EARTH IN GENESIS 1:1...

Jeremiah 4:23-28, “I beheld the earth, and, lo, it was without form, and void; and the heavens, and they had no light. I beheld the mountains, and, lo, they trembled, and all the hills moved lightly. I beheld, and, lo, there was no man, and all the birds of the heavens were fled. I beheld, and, lo, the fruitful place was a wilderness, and all the cities thereof were broken down at the presence of the LORD, and by his fierce anger. For thus hath the LORD said, The whole land shall be desolate; yet will I not make a full end. For this shall the earth mourn, and the heavens above be black: because I have spoken it, I have purposed it, and will not repent, neither will I turn back from it.”

Could the Bible be any clearer that God in His anger made the earth without form and void; and darkness was upon the face of the deep? The cities were inhabited by angels. Man had not been created yet. This is when dinosaurs roamed the earth. Argue as one may, these Scriptures plainly evidence why the earth was without form and void in Genesis 1:1. In fact, Jeremiah 4:23 even repeats the exact phrase word-for-word. These Scriptures cannot be ignored if one is to be an honest Bible student.

Those who believe in a Young Earth vehemently reject the idea that there's a Gap between Genesis 1:1 and 1:2; but as you've just read, God destroyed the cities of the earth and made the land desolate. Light ceased to shine (the sun, moon and stars were blocked out by God). The mountains trembled and moved. The earth had been a fruitful wilderness where dinosaurs and prehistoric birds and mammals lived. But God became angry for some reason (which is not specified).

I believe the answer is clear in consideration of Isaiah 14:14. Lucifer rebelled against God, drawing one-third of the angels with him to rebel, and it angered the Lord greatly. “The whole land shall be desolate; yet will I not make a full end. For this shall the earth mourn, and the heavens above be black: because I have spoken it, I have purposed it, and will not repent, neither will I turn back from it.” When have the heavens ever been black since creation? They haven't! The only logical, reasonable and Biblical answer is found in Genesis 1:1 where we are told that darkness was upon the face of the deep.

Without Form And Void (by Arthur C. Constance)