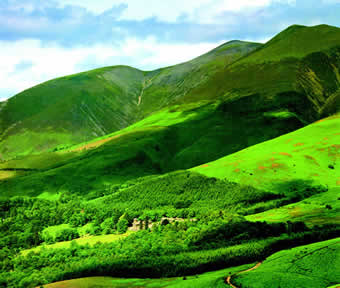 I am the good SHEPHERD: the good shepherd giveth his life for the sheep” (John 10:11). “For the Son of man is come to save that which was lost.  How think ye? if a man have an hundred sheep, and ONE of them be gone astray, doth he not leave the ninety and nine, and goeth into the mountains, and seeketh that which is gone astray? And if so be that he find it, verily I say unto you, he rejoiceth more of THAT SHEEP, than of the ninety and nine which went not astray.

“Even so it is not the will of your Father which is in heaven, that one of these little ones should perish” (Matthew 18:11-14). What an encouraging truth! Jesus is the Good Shepherd. All Believers are the sheep of His fold. Jesus is called the “Good Shepherd” because He will not allow even ONE of His sheep to be lost. Amen!

The individuality of each believer is important to God. You don’t hear much of this these days. We often hear broad terms such as “mankind” and “humanity” used in religious teaching, resulting in a loss of feeling special as an individual to God. Let me tell you, if you were the only person to have lived—Jesus would have died on the cross for you! You are very special to God, no matter who you are or what you may have done in your past. Remember—CHRIST DIED FOR THE UNGODLY (Romans 5:6). That includes you and me friend.

Perhaps you feel insignificant to God as a believer, thinking you are the least of all believers. Fret not and take to heart the encouraging Words of our Lord in Matthew 11:11, “Verily I say unto you, Among them that are born of women there hath not risen a greater than John the Baptist: notwithstanding he that is least in the kingdom of heaven is greater than he.” No matter how insignificant you may feel about yourself my friend, Jesus said you're already considered greater than John the Baptist in the Kingdom of Heaven. Amen and amen!

“For ye were as sheep going astray; but are now returned unto the SHEPHERD and Bishop of your souls” (1st Peter 2:25). The grace of God is all about forgiveness and moving forward for God. Others may not forgive you but God always will, because the blood of Jesus Christ cleanses us from all sin. Jesus doesn’t say, “Well, I'll make it with ninety-nine of My sheep, we won’t miss that one.” No, no, no, ten thousand times no! Jesus said He will NOT leave a single sheep behind, no not ONE. As a matter of fact, Jesus said He would go back and search for that lost sheep until He finds it. This is a wonderful truth teaching the eternal security of the Believer in Christ. We are safe in the hands of Jesus!

Humans are Like Dumb Sheep, Prone to Wander and Fail

We read in Isaiah 53:6 that people are like sheep, “All we LIKE SHEEP have gone astray; we have turned every one to his own way; and the LORD hath laid on him the iniquity of us all.” People are like sheep! Sheep are not known to be smart or cunning animals when it comes to safety; rather, they are susceptible and tend to wander away from the protection of the shepherd. People tend to wander away from God, from everything that is right and holy. People are easily swayed by the news media and by the politicians of our day. It appears that many people tend to believe everything they hear over the TV set. Quite a few folks have become lazy and have allowed a generation of unbelievers to tell them what to believe instead of making their own intelligent decisions. Most of the silly polls which the media conducts end up somewhere near fifty percent. Our nation is divided on nearly everything. No wonder God likens humanity to sheep. We are as puppets, so predictably unpredictable!

American society has reached the point of insanity. Young people start smoking for various goofy reasons and then spend a lifetime trying to break the addiction. People pump their bodies with steroids and all kinds of enhancement drugs just to compete or impress others. Look at all the artificial additives in our food that are known to cause cancer in lab animals. Millions of children are legally murdered through abortion annually, yet a woman goes to prison because she took drugs while pregnant and the baby died. A grade school child is arrested for saying “I’ll kill you” to a classmate, but the cartoons he sees on TV are filled with such statements. Illegal drugs and violent crime are glorified by musical artists for our young people emulate. It's all insanity. We’re destroying our own children in this nation. Oh, that people would seek the Lord.

Think for a moment with me, if you will, about the kind of society we live in. One guy won a contest and was put in the Guinness Book of Records for holding up a weight with his arm for five hours. The flesh was tearing off his hand with blood dripping. This is the insanity which Satan puts into the hearts of men. Billions of dollars are spent on space exploration each year, while millions of people are dying from starvation.

Legalized alcohol is responsible for the deaths of hundreds of thousands of people each year and costs taxpayers billions in damages. Where are our brains in this country? Why is alcohol legal? It's because of the greed of evil men. If you’ve never lost a loved one to alcohol, be quiet! Ask the mother who just lost her son to beer what she thinks about alcohol? I stood over the graves of a mother and her unborn son, killed by a drunk driver. I saw the father’s tears and the children’s dismay that mommy was gone. Don’t tell me about rights! We outlaw fireworks! We outlaw marijuana! We outlaw pit bull dogs! Why not alcohol? Which kills more? The evil beer companies tell people, “don’t drink and drive.” My question is: How do you know not to drive if you're too drunk to think straight? I mean, If you're intoxicated and out of your mind, how do you prevent yourself from driving? It's all a bunch of hype from the greedy beer companies. Booze has always been synonymous with sin, trouble and disaster. That's why Billy Sunday rightfully termed it, LIQUID DEVIL.

I know I'm preaching a bit here, so I'll jump off my milk crate now. I'm simply saying that Jesus Christ is the Good Shepherd, and oh how our wayward society needs to stop following demonically inspired influences, and start following the God of the Bible.

I am not condoning being hateful in anyway. I do NOT believe in being mean to ANYBODY. Christians who preach the Bible are often wrongfully labeled as hateful. In Psalm 97:10 God commands believers to HATE EVIL. The unsaved often mistake hatred against evil as hatred for sinners, but it's not. I preach against sin because I love the Lord and want to please God, but I also love people with God's unconditional love. God loves us, not because of who we are, but because of Who He is. And so must we love sinners for who we are in Christ.

We are to shine as lights in this old sin-cursed world, “That ye may be blameless and harmless, the sons of God, without rebuke, in the midst of A CROOKED AND PERVERSE NATION, among whom ye shine as LIGHTS in the world” (Philippians 2:15). Christians are to be harmless and to live decent, holy, upright lives.

Let’s say “yes” to Jesus! It’s not enough just to teach kids to say “NO” to what’s wrong. We must also teach them to say “yes” to what’s right. Just as Jesus is the Shepherd of every believer; likewise, every parent is the shepherd of their own children.Teach them in the Lord.

Christ is the Good Shepherd and we will never go astray in life if we will simply follow the Light of God's Word. Jesus is the Living Word (Revelation 19:13). Get you a King James Bible and love it, read it, study it, and live it.