Bishop Jakes' Drama & Message, "WOMAN, THOU ART LOOSED," will be another major theatrical release for the Kingdom of God.

It is sad that any so-called "preacher" of the Gospel would live in a $1,700,000 mansion, while so many poor people are starving to death in this world.  It is wicked!  T.D. Jakes is an imposter, a phony.  The Apostle Paul reminds the believers at Corinth that nether he nor his fellow laborers in Christ tried to make a gain from them.  Paul didn't try to get their money.  In contrast, T.D. Jakes has made a gigantic gain off many people, thus violating the Word of God.  Preachers are not supposed to be greedy.  1st Timothy 3:1-3 plainly teaches that if a man wants to be a Bishop (pastor) over people, then he should not be greedy of filthy lucre.  The Health, wealth, and prosperity Gospel propagated by these imposters of the Trinity Broadcasting Network and false prophets such as T.D. Jakes is an abomination unto the lord Jesus Christ.

"Jakes is completely ecumenical. He often speaks at Promise Keepers and other ecumenical forums. He supports heretics like Robert Schuller. Jakes himself has a background in the Jesus-only doctrine that denies the Trinity. Recently Dr. Norman Geisler charged Jake with promoting the "old, old heresy" of modalism which denies the doctrine of the Trinity (Calvary Contender, August 15, 2001).

Jakes appears with and supports the most radical of the Charismatics today, including Paul and Jan Crouch and the Trinity Broadcasting Network. This is the network that is helped popularize such unscriptural practices and phenomena as hysterical laughing, spirit slaying, Christian rock and roll, healing in the atonement, and evangelical Catholicism. In August 1995, Jakes appeared at Oral Roberts University with a lineup of some of the biggest names in the Word-faith movement, including R.W. Schambach, Lester Sumrall, and T.L. Osborn. One of Jakes' fellow speakers at that conference was Rodney Howard-Browne, who blasphemously calls himself the "Holy Ghost bartender" because of the strange drunkenness that has manifested during his meetings.

Jakes himself believes in the prosperity gospel. Like many of the Trinity Broadcasting Network preachers, Jakes falsely claims that Jesus was rich and that God wants us to be rich, too. He and his wife live in a $1.7 million mansion.

I saw Jakes preaching on the television a few weeks ago, and right in the midst of his preaching he began babbling away in mutterings he called "tongues." In direct disobedience to the Bible, there was not even an attempt to interpret the "tongues." -David Cloud, Way of Life Ministries (Read entire article).

America is going to Hell while greedy and crooked sinister ministers are getting rich abusing the name of Jesus.  TBN and their associates have turned the ministry into a den of thieves.  Jesus never intended for the church to be a  money machine.  The Apostle Paul was trying to help people, not take their money, which is clear from 2nd Corinthians 12:17-18.

He's been called America's best preacher and he's been featured on the cover of TIME magazine, but what do we really know about T.D. Jakes? 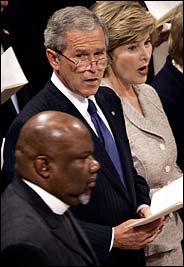 That may be true, but that didn't stop Jakes from his own political involvement with the Republican Party and with President George Bush. In fact, when black America was outraged about the Administration's handling of the Hurricane Katrina crisis, George Bush turned to one black man to bail him out and shore up his damaged reputation. That man was T.D. Jakes, who was all too willing to give the President the political cover he needed.

But Jakes is even more conservative than Bush. Unlike Bush, who has hired gays and lesbians in the federal government, Jakes has called homosexuality a "brokenness" and said he would not hire a sexually active gay person.

And Jakes has also adopted another part of the presidential philosophy: his lifestyle. Jakes and his congregation refer to his wife Serita as "the first lady," and they live in a $1.7 million mansion on Dallas's scenic White Rock Lake next to a building once owned by oil magnate H.L. Hunt. As Time magazine explained a few weeks ago, "He flies on charter planes or in first-class seats, sups with a coterie in a room known as 'the king's table,' sports a large diamond ring and dresses like the multimillionaire he is."

I don't believe that black preachers have a duty to be poor, but I do believe they should not make their millions off the backs of their struggling kin.