Albert Einstein was NO Christian!

"As a child I received instruction both in the Bible and in the Talmud.  I am a Jew, but I am enthralled by the luminous figure of the Nazarene....No one can read the Gospels without feeling the actual presence of Jesus. His personality pulsates in every word.  No myth is filled with such life." --Albert Einstein 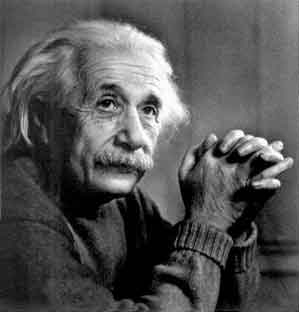 I have read various debates over whether or not Albert Einstein was a Christian.  The answer clearly is a big NO!  Anyone who calls Jesus Christ a "myth" has a peanut for a brain.  No wonder God said in 1st Corinthians 1:21, "For after that in the wisdom of God the world by wisdom knew not God, it pleased God by the foolishness of preaching to save them that believe."  It is secular wisdom that blinds him from God's Truth.

Colossians 2:8 reads, "Beware lest any man spoil you through philosophy and vain deceit, after the tradition of men, after the rudiments of the world, and not after Christ."  Man's greatest wisdom is utter foolishness to to God.  Now there's nothing foolish about preaching the Gospel, but it always appears foolish to the lost Christ-rejecting world.  Unto us which believe, Jesus is Precious (1st Peter 2:7).  To the born again believer, Jesus is Almighty God (John 1:1-3,14; 10:33; Revelation 1:8).  To the unsaved, Jesus is just a myth or a great historical figure.

Albert Einstein may have been a very brilliant man according to history, but he was a fool in God's eyes.  What doth it profit a man if he gain the whole world and lose his own soul?  Matthew 16:26, "For what is a man profited, if he shall gain the whole world, and lose his own soul? or what shall a man give in exchange for his soul?"  All the wisdom, knowledge, wealth and fame in this world won't matter 100 years from now.  What will everything in your life matter 100 years down-the-road if you die without Christ?  Sadly, Einstein died without Jesus Christ and is burning in Hell-fire this moment.  It's Jesus or Hell!

When asked if he believed in God, Albert Einstein answered "I believe in Spinoza’s God who reveals himself in the harmony of all that exists."  Benedict Spinoza (1632-1677), the renowned philosopher of pantheism, held that God and Nature are one in the same.  "I am fascinated by Spinoza’s pantheism, but I admire even more his contribution to modern thought because he dealt with the soul and body as one, not two separate things."  Spinoza’s oneness of spirit and matter reinforced Einstein’s search for a single unifying force in Nature known as the "unified field theory."

The world is a wicked place (1st John 5:19).  It's NOT going to get any better.  Mankind is prone to evil, hate, gossip, backstabbing, wrath, killing, defrauding, adultery, lying, cowardliness, etc (Galatians 5:19-21).  Einstein was no fool, he knew exactly what nuclear weapons would be used for.  In fact, Einstein was involved with at least 34 known Communist fronts.  Einstein was an unsaved man who helped build nuclear bombs to kill millions of people.  Einstein was NO hero, and certainly NO Christian!  Just like so many brilliant people in this world, Einstein was an idiot.

Einstein was a Big Communist!