“A nation and a congress that will keep God out, just may
have invited the Devil. Think about that one.” —Rep. James Traficant Jr. 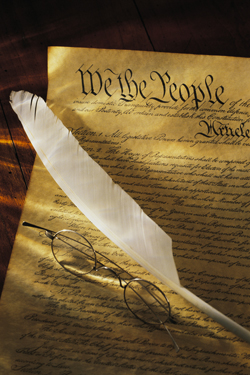 America is going to hell in a wheelbarrow. There is no debating the detrimental effects of having removed God, prayer and the Bible from the public schools of America. Instead, children are being INDOCTRINATED with the lies of Evolution, the sick-mindedness of homosexuality and the demonic witchcraft of Harry Potter. A holy God cannot bless America!

This powerful statement was made by Congressman James Traficant Jr. (1941-2014) before the House of Representatives in March of 2000...

Mr. Speaker, once again, the Supreme Court is considering a school prayer issue.

Beam me up. The founders are rolling over in their graves. The founders never intended to separate God from our schools; the founders simply intended to ensure that there would not be one, one State-sponsored religion, period. My colleagues know it, I know it, and the American people know it. The truth is, an America without prayer is an America without God, and a school without prayer is a school without God.

I yield back the utter stupidity of the America political system that continues to rationalize, debate, and deny the importance of God and why our founders placed it in our Constitution. [emphasis added]

God will not bless a nation that glorifies wickedness, praises the ungodly and deliberately indoctrinates children with heathendom. Woe unto the United States!

Here's another powerful statement which was made by Congressman Traficant Jr. before the House of Representatives in April of 1998...

Mr. Speaker, after the Arkansas tragedy where four students and a teacher were killed by two youngsters, the shooting death of Pennsylvania teacher John Gillette has shocked America. Experts are confused and, they say, searching for answers. The irony is these same experts, with all their degrees, have one thing in common: most of them oppose school prayer. In fact, time and time again, they have employed constitutional mumbo jumbo to kill school prayer.

I yield back any common sense left in Washington. [emphasis added]

Here's another incredibly insightful speech by Rep. Traficant Jr., also from April of 1998...

Mr. Speaker, in America, Communists can work in our defense plants, illegal immigrants who jump the fence can get citizenship, there are law libraries for mass murderers; some want free condoms for school children, and some now want free needles for drug addicts. Think about it. Free condoms, free needles, but in America, no school prayer. Is it any wonder the streets of America are full of narcotics and blood?

I yield back the balance of any common sense left in any of the politicians in Washington, D.C.

Congressman Jim Traficant (a good man) made numerous courageous one-minute speeches before the House, which patriotic and God-fearing Americans can appreciate. It is so obvious that Rep. Traficant was railroaded out of congress in 2002 because he was not willing to go along to get along (in contrast to hundreds of other worthless members of congress who have betrayed their oath of office). Traficant was made an example to anyone else in congress who dares to rise up against the almighty criminal gang who have hijacked our nation's highest office. Congressman won a RICO complaint against the federal government in 1983, which made him a walking bulls-eye from that moment forward.

It was only 10-days before U.S. president John F. Kennedy's assassination that he publicly made the following shocking statement:

SOURCE: President John Fitzgerald Kennedy - In a speech made to Columbia University on Nov. 12, 1963, ten days before his assassination!

Here's a shocking video of President Kennedy giving a speech, pleading with Americans to warn others about a malicious secret society conspiring to overthrow The White House and government. IT HAS HAPPENED!!!

Now you know in part why they killed President Kennedy. The following quote is by Myron Fagan, which explains the rest...

Kennedy was also against the Vietnam conflict, but there's no money in peace. The Banksters make money (lots of money) by starting wars through False Flag Terror Attacks. Unclassified documents have revealed that the infamous Gulf Of Tonkin incident never actually happened. It was a False Flag Operation which was used by President Lyndon B. Johnson as a pretext to involve the United States in the Vietnam War, resulting in the needless murder of 58,000 American young men.

We have every right to demand the truth from OUR government because everything they do, they do in OUR name and with OUR money. It's not the unanswered questions that should worry us as much as the unquestioned answers. The media is filled with lying propaganda. Congress is filled with lying criminals. The government is spending our money in our name and we have a right to know where it's going. This is our First Amendment right—to peaceably protest against the government.

This is not anarchy, it is our legal right as citizens of the United States. Would to God that more Christians and churches would exercise that right. As Alex Jones says, “We are pro-family, pro-gun, and pro-Jesus Christ!” The sky may not be falling yet, but the dark storm clouds are gathering. The dots are in place and the lines are now being drawn. ~By David J. Stewart

Why James Traficant was Wrongly Railroaded Out of Congress
When freedom fails, good men rot in filthy jails!

Begin Traficant speech on the floor of the House of Representatives:

The Bankruptcy of The United States United States Congressional Record, March 17, 1993 Vol. 33, page H-1303 The Speaker is Rep. James Traficant, Jr. (Ohio) addressing the House: "Mr. Speaker, we are here now in chapter 11... Members of Congress are official trustees presiding over the greatest reorganization of any Bankrupt entity in world history, the U.S. Government. We are setting forth hopefully, a blueprint for our future. There are some who say it is a coroner's report that will lead to our demise.

The receivers of the United States Bankruptcy are the International Bankers, via the United Nations, the World Bank and the International Monetary Fund. All United States Offices, Officials, and Departments are now operating within a de facto status in name only under Emergency War Powers. With the Constitutional Republican form of Government now dissolved, the receivers of the Bankruptcy have adopted a new form of government for the United States. This new form of government is known as a Democracy, being an established Socialist/Communist order under a new governor for America.

This act was instituted and established by transferring and/or placing the Office of the Secretary of Treasury to that of the Governor of the International Monetary Fund. Public Law 94-564, page8, Section H.R. 13955 reads in part: "The U.S. Secretary of Treasury receives no compensation for representing the United States?' . . . Their lust is for power and control. Since the inception of central banking, they have controlled the fates of nations. . . . The Federal Reserve System is a sovereign power structure separate and distinct from the federal United States government. . .

Prior to 1913, most Americans owned clear, allodial title to property, free and clear of any liens or mortgages until the Federal Reserve Act (1913) "hypothecated" all property within the federal United States to the Board of Governors of the Federal Reserve, in which the Trustees (stockholders) held legal title. The U.S. citizen (tenant, franchisee) was registered as a "beneficiary" of the trust via his/her birth certificate. In 1933, the federal United States hypothecated all of the present and future properties, assets and labor of their "subjects," the 14th Amendment U.S. citizen, to the Federal Reserve System.

All has already been transferred as payment to the international bankers. Unwittingly, America has returned to its pre-American Revolution, feudal roots whereby all land is held by a sovereign and the common people had no rights to hold allodial title to property. Once again, We the People are the tenants and sharecroppers renting our own property from a Sovereign in the guise of the Federal Reserve Bank. We the people have exchanged one master for another. This has been going on for over eighty years without the "informed knowledge" of the American people, without a voice protesting loud enough. Now it's easy to grasp why America is fundamentally bankrupt.

Why don't more people own their properties outright? Why are 90% of Americans mortgaged to the hilt and have little or no assets after all debts and liabilities have been paid? Why does it feel like you are working harder and harder and getting less and less? We are reaping what has been sown, and the results of our harvest is a painful bankruptcy, and a foreclosure on American property, precious liberties, and a way of life. Few of our elected representatives in Washington, D.C. have dared to tell the truth.

The federal United States is bankrupt. Our children will inherit this unpayable debt, and the tyranny to enforce paying it. America has become completely bankrupt in world leadership, financial credit and its reputation for courage, vision and human rights. This is an undeclared economic war, bankruptcy, and economic slavery of the most corrupt order! Wake up America! Take back your Country."

The following comments are from http://www.dailypaul.com/node/67591...

In a nutshell, the super Criminal President Franklin D. Roosevelt, front man for the Rothschild Banksters, signed a law putting the US into bankruptcy in 1933, and gave all property and future possessions and property of all the citizens and future citizens to the Rothschild Banksters, making us all serfs who own nothing. These are the same Banksters who are now pillaging the USA through "our" pathetic and criminal Congress. Of course, this is all paper fiction which can be undone as easily as it was done. That's why we're directing people to the Precinct System to take back the country in 2010.

We can declare these Money Changer laws null and void, and arrest all those who are still alive. And then put the monetary system in the hands of men who will serve the people and the nation, instead of ruthlessly exploiting the nation for their own profit and lust for power. Congressman Traficant sits in jail still for saying such things as above, as well as winning some decisive battles against the Neo-Con Jewish Crime Syndicate who are the International Banksters who oppress our country and mankind.

Thank God for good men like Congressman James Traficant Jr. who stand against corruption. I really admire the guy. We need more men in America, men like Jim Traficant, rest his soul. Our U.S. Constitution could be restored if half of the 535 members of Congress would care as much as Jim Traficant. He questioned the system, and they punished him for it, locking him away for 7 1/2 years in hard prison. They abused him, putting him in solitary confinement for several months. I can't wait until God punishes the wicked people who hurt Jim Traficant. I can't wait until the Bush administration war criminals are brought to justice in God's court, for the 9/11 Inside Job and the illegal Iraqi war based on blatant fraud and lies. Criminals have hi-jacked the United States, which is blatantly evident to anyone who cares with half a working brain. ~By David J. Stewart

“This is 'The United States of America,' not 'The Central Government of America'!”
—A Good Man, Congressman Jim Traficant Jr.

“Where the spirit of the Lord is, there is Liberty.” —2nd Corinthians 3:17