What's the difference is between Wicca and Satanism? Biblically speaking, there's not a dime's difference between the two, they're both false religions.

However, one of the greatest challenges that exists in occultism is explaining the differences and similarities between Wiccanism and Satanism. Wiccans claim a belief-system very different from the Satanists and yet their esoteric philosophies are remarkably alike. Most Wiccans will usually say they do not mind what religion somebody follows so long as everybody else respects one another and leave each other alone to do what they want to do. This is the exact same philosophy of the Satanists and New Agers. See The Pentagram to learn the difference between the two pentagrams shown here.

Christianity is the only faith in the world that is intolerant of all other faiths. This is because the Word of God is adamant that Jesus Christ, the Son of God, is the ONLY way to God the Father. John 14:6, “Jesus saith unto him, I am the way, the truth, and the life: no man cometh unto the Father, but by Me.” Wiccans, as do Muslims and Judaizers, deny that Jesus is the Christ. In so doing they have chosen the Lake of Fire as their eternal punishment, where they will be tormented DAY AND NIGHT . . . Revelation 20:10 and 15, “And the devil that deceived them was cast into the lake of fire and brimstone, where the beast and the false prophet are, and shall be tormented day and night for ever and ever... And whosoever was not found written in the book of life was cast into the lake of fire.”

In establishing the philosophical, doctrinal and practical association between Wiccanism and Satanism one only has to look at the kind of literature quoted by both. The writings and teachings of the 20th century's leading Satanist, Aleister Crowley (1875-1947), are freely quoted by both, and in particular his "Golden Rule" or "Thelema" in his "Book of the Law " (Liber Al vel Legis) which reads:

"Do what thou wilt shall be the whole of the law; love is the law, love under will"

What the uninitiated do not necessarily understand, however, is what all these terms mean.  In saying, "love is the law", the human emotional/ethical complex called love (tenderness, warmth, kindness, generosity, etc) is being placed subordinate to the law of the Satanist and the Satanic will of the master magician.

There is, in the minds of most newly initiated and naïve Wiccans that witchcraft is no more than a kind of mischievous, romantic rebelliousness which has a positive, edifying end along the lines of the Hollywood movie, Bedknobs and Broomsticks where paganism is portrayed as far from being a blight to Christianity and other religions, but is actually working alongside it as a complimentary, spiritually harmless and benevolent contributor to the welfare of mankind. We ought, if we are tempted to accept such a model, to remember the "wise" words of Silver Ravenwolf comparing these to those of our friend "Parasite". Anybody who seriously makes a study of Wiccanism, and in particular the works of those high up in the Wiccan hierarchy, will see that it is nothing more than a mutated form of Satanism cloaked - from time to time - with an aura of semi-respectability.

Many Wiccans say that they can accommodate Christianity and that they can live with Christians and have no malevolence towards them, and therefore expect Christians to do the same for them and not try to "convert" them. One Wiccan, with whom I became very friendly (much to her surprise), however, confessed to me:

"You must excuse me. I didn't mean to sound rude. I think you're cool. The demons made me renounce your religion. I've even burned Bibles in my time, for the fun of it, while renouncing Jesus Christ. So, I'm a witch, and not too bad, at that..."

Here we have a Wiccan admitting the reality of demons (evil spirits with personalities, and not just natural forces) and confessing that she has burned Bibles and renounced Jesus Christ. For whilst Wiccans would like to be benevolent, the very nature of their religion - which is anti-Christian because of its direct ties to Satanism - forces them to renounce it. For Wiccanism and Christianity are, in truth, mutually exclusive, something Satanists have no problem because they are far more aware of what is happening in the invisible realm than most low-level Wiccans. "The proof of the pudding is in the eating", as they say, and to be a Wiccan requires, at some stage, a rejection of Christianity and Christ.

We have seen that Wicca and Satanism are basically of the same pedigree and that Satanists are far more aware of the identity of the powers and forces behind Wicca than most Wiccans are.  Most Satanists actually begin as Wiccans and it is from the latter milieu that most Satanists are recruited.  Satanists make it a practice to be involved in Wicca in order to find suitable material for the core of their common belief - a power that is common to both and which they are both seeking.

Both Satanists and witches adore and worship the Pagan god, Pan, the most infamous sexual predator in history... 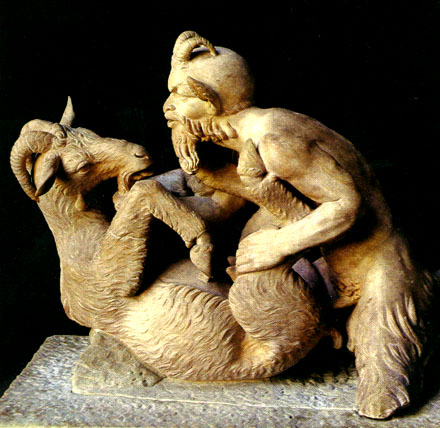 Both Satanists and Wiccan witches worship the Pagan god, Pan!

The Ouija Board  |  History of Wicca

So Ya Wanna Be a Witch?  |  Bewitched