“Twelve years they served Chedorlaomer, and in the thirteenth year they rebelled.” —Genesis 14:4

There is something called the law of first beginnings, that is, where something originated. You'd be surprised how many things originate from the Bible. I believe that the number 13 originates with Nimrod at the tower and city of Babel, who was the thirteenth from Adam. Also, in Genesis 14:4, “Twelve years they served Chedorlaomer, and in the thirteenth year they rebelled.” The number 13 represents REBELLION. Coincidence? Perhaps the most obvious origin of the number 13 and it's meaning is the fact that a child becomes rebellious at around age 13. You decide!

"Perhaps this is why the number 13 has always been associated with magic and the occult, and why it is a number perceived to possess some mysterious yet tangible power. It is an emblem of a secret knowledge, a knowledge which does indeed confer power upon those conversant with it. It is a knowledge that religious orthodoxies have long feared and tried to suppress. 13 may be perceived as unlucky to those who fear the secret gnosis it represents, but for adherents of that gnosis it is (as it always was), a sacred number."

Everyone knows that the number 6 represents man. The sixth word of the sixth verse of the sixth chapter of the sixth book of the New Testament (Romans 6:6) is the word “man.” Modern corrupt Bibles don't have the hand of God like the King James Bible does. God knew what He was doing. The number 7 is the number of completion. There are 7 notes in a musical diatonic scale. There were 7 days of creation. Six days of active creation represents man (which is what the number 6 represents), but then on the seventh day of creation God rested, thus completing creation. God could have stopped on the sixth day and said “I'm done.” Why did God add an extra day just to rest and look over what He had made? It was to teach us that salvation is of the Lord. In God we have complete salvation. Man had no part in creation, just as man has no part in salvation. God does all the saving. 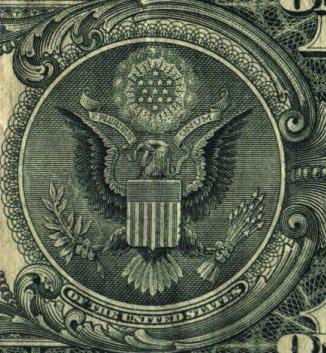 Deuteronomy 13:13, “Certain men, the children of Belial, are gone out from among you, and have withdrawn the inhabitants of their city, saying, Let us go and serve other gods, which ye have not known.” The sons of Belial REBELLED in Deuteronomy 13:13. Coincidence? Nimrod, who led the building of the tower and city of Babel was the thirteenth from Adam. Judas Iscariot (13 letters).

1st Timothy 6:10 says the love of money is the root of ALL EVIL. The Bible says money is filthy... filthy lucre! There are preachers who would never go to a filthy Hollywood movie, but they are in love with filthy lucre... money, money, money, money!!! People that believe money will do anything, will do anything for money. You'd better watch what place money has in your heart and life. E PLURIBUS UNUM (13 letters). New World Order (13 letters). ANNUIT COEPTIS (13 letters). After 12/21/2012 will comes 01/13/2013. What will the year 2013 hold for the world? 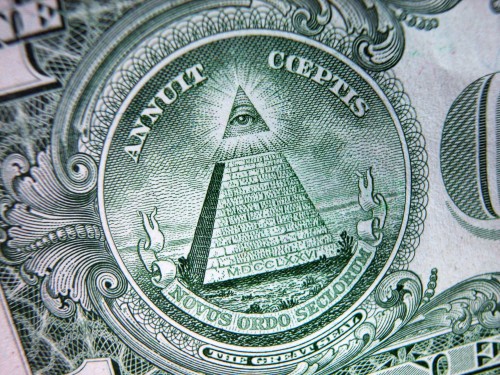 Mark 17:21-23 says that there are 13 evils in the human heart, “For from within, out of the heart of men, proceed evil thoughts, adulteries, fornications, murders, Thefts, covetousness, wickedness, deceit, lasciviousness, an evil eye, blasphemy, pride, foolishness: All these evil things come from within, and defile the man.”

Learn More About The U.S. Dollar!

All children today go to school for 13 years (kindergarten plus 1-12 grades). It used to only be 12 years. But they kicked the Bible and prayer out in 1963 and then added kindergarten (making it 13 years). The public school system is stamped with rebellion.

You have to go for 13 years to have your faith destroyed in God. Originally there were only 13 channels on television. 13 year olds are known as rebellious. There is something about the number 13 that is far more than mere coincidence. The heavy-metal bands certainly think so.

My stand against Rock music as a God-fearing Christian has nothing to do with my personal feelings toward people. I admire many musicians for their hard work and talent, being a musician myself, but I am on the Lord's side and God commands us to refute (Greek: elencho, “to expose”) all works of darkness (Ephesians 5:11). Heavy Metal with its screeching guitars, Rock 'N' Roll rhythm, El Diablo signs and worldliness is of the Devil.

Dave Mustaine, founder and lead guitarist of the Heavy Metal band, MEGADETH, publicly testified on the Alex Jones Show in 2009 that he recently became a born-again Christian. In the Alex Jones' interview (Nightly News) on March 15, 2012 Mustang says that he has totally committed his life to God. Something is wrong when a man professes to love Jesus Christ, while he continues to cater to hundreds-of-millions of worldly fans. The Devil's crowd doesn't mind if you profess to be a child of God, just so long as you continue live like a child of Satan. All of MEGADETH's fans flash El Diablo Satan signs at Mustaine's Rock concerts. How does that honor the Lord Jesus whom Mustaine claims to love and serve? 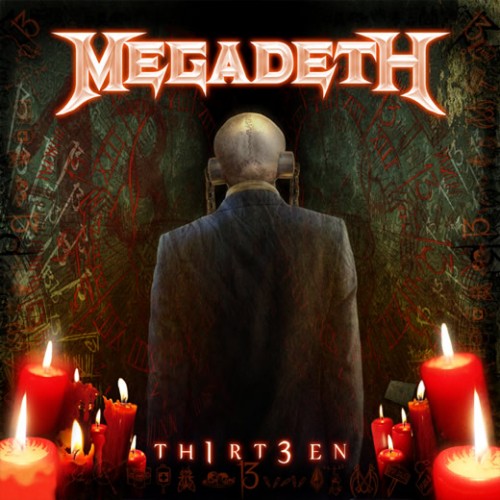 13 is revered by Satanists and the occult as the number of DEATH.

Notice the 13 lit candles above!!!

Dave Mustaine denies the satanic nature of his latest album, Th1irt3en. Mustaine says 13 has always been his lucky number. What a lousy liar. Mustaine is still serving the Devil. There are actually 13 CANDLES on Mustaine's latest album (as in the song 13 CANDLES from SACRAMENTUM's sinister and demonic album that I just showed you).

Now notice below... If you think I'm stretching the truth concerning Dave Mustaine, consider the song 13 CANDLES by the Heavy Metal band, SACRAMENTUM. Here's their album cover, which is a tribute to a serial killing, child-molesting rapist, named Elizabeth Bathory. It's not mere coincidence that Dave Mustaine's latest album is titled Th1rt3en, with 13 lit candles. Who's Mustaine think he kidding?)... 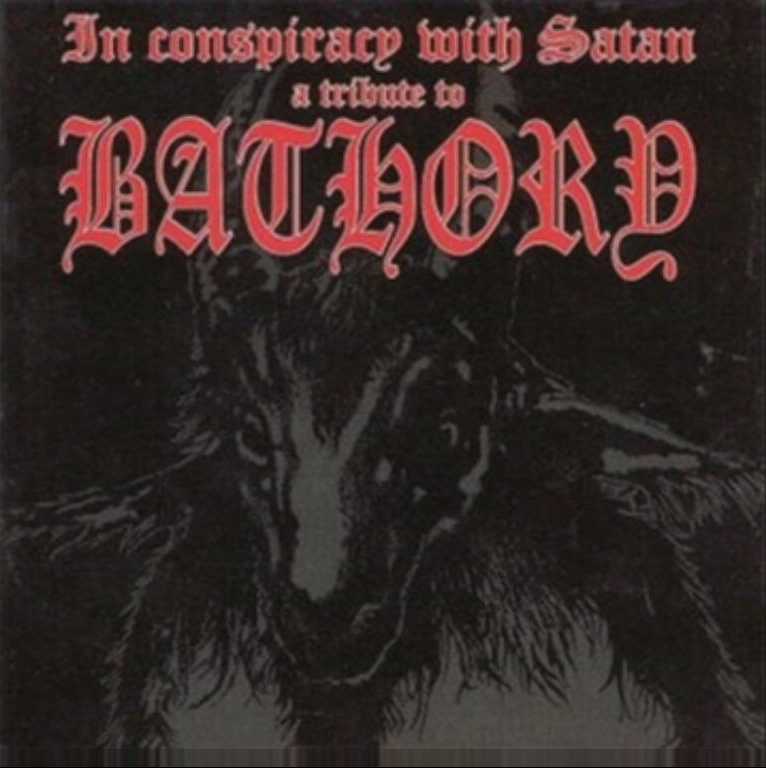 ABOVE: The album cover for the Heavy Metal band SACRAMENTUM. This album offering is their tribute to Satan, featuring such songs as "13 CANDLES." Notice the Goat Of Mendes (the ram's head on the album cover).

Dave Mustaine's lord is Satan, not Jesus Christ. Although a sinner doesn't have to stop living in sin to be saved (for that would be self-righteousness), a sinner DOES need to acknowledge their SINNERSHIP. Mustaine sees no harm in his heavy metal occult music. Mustaine admits that he has done some horribly bad things in his life, yet he doesn't see leading hundreds of fans into satanic heavy metal as being an evil thing. MEGADETH is all about praising Satan, death, rebellion, depravity and that which is unholy. This is the major underlying theme of ALL HEAVY METAL music. It's a Gothic subculture of demon-worship, self-abuse and rebellion.

I haven't heard Dave Mustaine apologize for his wicked career, ruining the lives of tens of hundreds-of-millions of youth and leading them into satanism? Mustaine has defended his music, except for openly satanic portions of it. That's like saying that you love God while selling Playboy magazines; but you tell everyone that now you're a born-again Christian you won't sell porno videos anymore. You'll only sell photos. That's how insane Dave Mustaine's claim to Christianity is while writing, selling and performing heavy metal music. Mustaine is making tens-of-millions of dollars selling his garbage music to fans worldwide!!! Mustaine loves God? I think not!

The Antichrist will do the same thing as did king Nebuchadnezzar (Revelation 13:15). It is not mere coincidence that we are seeing occult IMAGES all over the place today, in our faces. The world is being prepared to worship the coming Antichrist. If the coming of the Antichrist weren't near, then we wouldn't see all this preparation for his coming. That ought to either excite you if you are a born-again Christian, or frighten you if you are an enemy of the cross of Jesus Christ. We are now living in the End Times my friend.

One thing I learned a long time ago is that Rock 'N' Roll singers are filthy liars. Anyone familiar with the occult fully knows that the number 13 is revered amongst heavy metalists. The number 13 represents death, war and destruction. That's what Heavy Metal Rock all about, that is, the total destruction of the United States of America. That's why Heavy Metal themes frequently center around suicide, murder, destruction, blood sacrifices and Satan.

The sicko Rock band GWAR has sold over 30,000,000 albums in the United States. The band produced an album called, “America Must Be Destroyed!” The band LIES about the intent of their title and makes the following lame and bizarre excuse...

"The lyrical content in America Must Be Destroyed was greatly inspired by Dave Brockie’s fight with police officers while touring in Charlotte, North Carolina, in 1992. The controversy revolved around Brockie’s rubbery penis adornment. Brockie was revolted by this attack on his rights and so he created a concept album revolving around an elite “Morality Squad” that attacked the members of Gwar and stole Oderus’s penile attachment (a.k.a. Cuttlefish of Cthulu, a phallic hell beast that normally dangles from his crotch)."

The truth is that singers very often LIE through their teeth about the true satanic, destructive, immoral intents of their music to counter criticism from parental advocacy groups wanting to protect their children from the sicko music industry.

New World Order Basics | Why The Antichrist Must Come Soon