No Religion Allowed In The Government Schools? 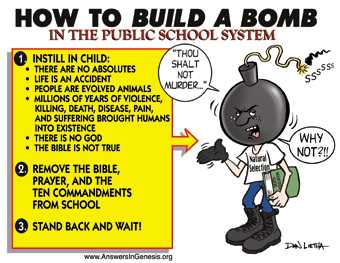 Better look again. The predominant religion in our country has been creeping in -- or barging in, however you want to look at it - since April 20, 1837.

The deeply-held values of parents and their ministers could easily be taught during the hours in which schoolchildren were in class. Horace Mann's bill consolidated state control over the schools and Massachusetts had embarked upon its brave experiment. Under Mann's influence, a minimum school year of six months was mandated by an act passed in 1839. Compulsory education was off and running.

Biographer Jonathan Messerli notes that Horace Mann lived "...at a time when political and technological revolutions seemed to be ushering in the new dawn of an age of unprecedented human welfare. Mann hoped to accelerate "the agenda of the Almighty," as he referred to his endeavor. To accomplish this, he believed the nation needed new enabling institutions, especially public schools." Messerli describes the religious nature of Horace Mann's vision in an alarming way. "What the church had been for medieval man, the public school must now become for democratic and rational man.

God would be replaced by the concept of the Public Good, sin and guilt by the more positive virtues of Victorian morality and civic conformity, and mankind would emancipate itself once and for all, not only from the relentless gnawings of a Puritan conscience but, through its own self-attained enlightenment, from the endemic evils of poverty, ignorance, violence, disease, and war."

Messerli presses forward: "All of this was now possible only if reasonable men and women would join together to create a well-managed system of schooling, where educators could manipulate and control learning as effectively as the confident new breed of engineers managed the industrial processes at work in their burgeoning textile factories and iron and steel mills. For the first time in the history of western man, it seemed possible for an intellectual and moral elite to effect mass behavioral changes and bring about a new golden age of enlightened ethics, humanism, and affluence. Indeed, so dazzling was the prospect, that Mann and his countless co-workers could not conceive of the possibility that those who would follow in their footsteps might actually build a suffocating and sometimes mind-numbing establishmentarian bureaucracy. Nor could they envision that in the hands of lesser individuals, their cherished institution, instead of functioning as a fundamental part of the social solution they sought, could become an integral part of the problem."

The foundations of the American faith and the American family were being torn apart by these northern Yankee Unitarians whose mission was nothing less than to remake the cultural, educational, and spiritual landscape. "If the foundations be destroyed, what can the righteous do?" (Psalm 11:3)

159 years have passed since Horace Mann gained his triumph. His influence is now seen in every school district in America. Our neighborhood schools have become temples of Religious Humanism where man, not God, is honored and worshiped. Consider this quote from an article by John Dunphy ("The New Faith of Humanism and Teachers") published in the Jan/Feb 1983 issue of THE HUMANIST MAGAZINE:

"I am convinced that the battle for humankind's future must be waged and won in the public school classroom by teachers who correctly perceive their role as the proselytizers of a new faith: a religion of humanity that recognizes and respects what theologians call divinity in every human being. These teachers must embody the same selfless dedication as the most rabid fundamentalist preachers, for they will be ministers of another sort, utilizing a classroom instead of a pulpit to convey humanist values in whatever subject they teach, regardless of the educational level -- preschool day care center or large state university.

The classroom must and will become an arena of conflict between the old and the new -- the rotting corpse of Christianity, together with its adjacent evils and misery, and the new faith of humanism. It will undoubtedly be a long, arduous, painful struggle replete with much sorrow and many tears, but humanism will emerge triumphant. It must if the family of humankind is to survive."

Martin Luther was right when he observed that "...the universities and schools will prove to be the gates of hell, unless they diligently labor in explaining the Holy Scriptures and engraving them in the hearts of youth. I advise no one to place his child where the Scriptures do not reign paramount."

Schools that refuse to teach the truth are not worthy of one nickel to keep them open. Clearly, not all government teachers see themselves as humanist evangelists. Nonetheless, they cannot be neutral. They are sanctioned by the government to offer students a philosophy which revolves around the idea that mankind, having evolved, is self-existent with no eternal destiny. With no one outside himself to turn to for the solution to his problems, man becomes, or invents, his own god.

It is no surprise that Horace Mann had personally rejected the Word of God as a young man growing up in Franklin, Massachusetts. Sitting under the famous minister, Dr. Nathanael Emmons, young Horace was confronted by the fact of his own sinfulness. Though Emmons's sermons contained both Law and Gospel, Horace was repulsed by the idea of a literal hell. According to his own account, he resolved to create a god which was more to his own liking:

"I remember the day, the hour, the place and the circumstances, as well as though the event had happened but yesterday, when in an agony of despair, I broke the spell that bound me. From that day, I began to construct the theory of Christian ethics and doctrine respecting virtue and vice, rewards and penalties, time and eternity, God and his providence which...I still retain."

From the beginning of time, men have attempted to construct and reconstruct their own ideas about God and His holy demands. Perhaps no other person in American history, however, has been as instrumental in undermining the faith of our fathers as Horace Mann. Throughout his life, he developed an unswerving belief in the unlimited improvability of man through education. Jeremiah 17:9 declares, "The heart is deceitful above all things, and desperately wicked: who can know it?" Horace Mann's great mission was to remove the "treachery" of God's Word from the classroom, thereby freeing little boys and girls from its demands. The salvation of society would rest in the corporate enlightening of the human mind.

Mann's efforts were resisted by many ministers of the day, but none had any idea of how entrenched this humanist faith would become in the American way. Today, God is not welcome in the government school classrooms of our nation. His Word is banned. Children are faithfully indoctrinated by the priests of human achievement; they are trained to bow in worship at the altars of human convenience.

The words of Christ inform us of the dreadful condition of state education: "He that is not with me is against me..." (Matthew 12:30a). God's people must separate themselves from a system which is choking the spiritual life out of their children.