"an evolutionist, is metaphysically based at some level just as much as . . . some creationist." 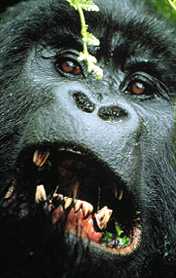 In other words, at the base level, the evolutionist exhibits faith (in the absence of physical proof) in evolution just as the creationist exhibits faith in God. Dr. Ruse shocked his colleagues when he conceded this at a 1993 symposium of the American Association for the Advancement of Science. Many Darwinists felt that he gave away the store with his comments--but they had to have known it is TRUE.

Unfortunately, the average man on the street doesn't know what's going on behind these closed doors. He just knows he's been taught that he's a monkey. If the "scientists" (falsely so called) say it's true, it must be, right? Wrong! This writer wants everybody to know that evolution is not science. If evolution is not science and evolutionary scientists know this, "Why is it still taught as fact?" To save face, my friend. Could you imagine the uproar if the scientific community said, "We were wrong?" Whoa! What about the man who has given 30 years of his life to studying a lie? What kind of work would he do? Do you think Satan is going to let belief in evolution die out? People would start seeking the Lord!