LEXINGTON, Ohio -- A costly struggle against heroin rages in the comfy, cedar-paneled home on West Hanley Road, and everyone inside is losing.

The adult sons of Steve and Chris Thomas have stolen more than $50,000 from their parents' business to support their heroin addictions. The Thomas home is in a lockdown state, with money and other valuables that could be traded for drugs kept away from the boys. A bolt lock protects the master bedroom.

Last week a Richland County judge arraigned Mark, 22, and Matt, 18, on felony drug possession charges. The next day Mark Thomas was caught by his parents using heroin again and, as has happened before, was thrown out of the house. It's a war with no victory in sight.

"I don't know what we're going to do," Chris Thomas said.

This is but one snapshot of a rising tide of small-town heroin abuse in the Midwest, occurring in tidy little communities with town squares, bicycles on front lawns and American flags flapping in the breeze. Hospitals and drug counselors note an alarming spike in overdoses, and overmatched police agencies are scrambling to address a drug onslaught once deemed the exclusive purview of big cities and longtime addicts.

In the northern Ohio railroad town of Willard, population 6,800, police are investigating five fatal heroin overdoses since December, two of them on a recent weekend.

"All of a sudden it blossomed," is how Capt. Robert McLaughlin of the Huron County Sheriff's Department described the arrival of heroin. "We're up to our eyeballs in it."

Although marijuana, sheltered among the tall stalks of cornfields, and crack cocaine, brought in from Detroit, had long been the mainstays in the tightly defined universe of illegal drug users, police officials and treatment experts say the heroin market has expanded beyond the predictable clientele.

More troubling, the price of heroin is dropping, the availability is increasing and the purity of the drug is rising. "It is much stronger than what abusers are used to," said Mansfield Police Chief Phil Messer, who leads a 10-county drug task force called METRICH.

This region of Ohio, described ruefully by one undercover police officer as "conveniently located" amid the inverted urban triangle of Detroit, Cleveland and Columbus, is especially susceptible to drug trafficking because of easy access to several major highways. Formerly isolated and exclusively rural communities are now primarily bedroom communities. It was often considered the "Crossroads of America," but many of Ohio's small towns have lost their insularity and are now part of interstate drug traffic.

Deb Kline, a nurse in rural Crestline, said the number of intravenous heroin addicts treated at Freedom Hall Treatment Center, about an hour north of Columbus, has quadrupled. Worse, Kline said, the universe of drug abusers is expanding from hardened addicts in their 40s and 50s to people in their early 20s.

"Kids who come from upper-middle class families, kids who had pretty decent high school careers," she said. "I wish I knew why."

Few people wonder more than the Thomases, who built their home 15 years ago amid the tall pines in rural Lexington, population 4,200. As Steve Thomas put it, they came to raise their boys "away from the bull-crap of the city." He was building what would become a thriving vending machine business.

"We're first-generation success," the 54-year-old Thomas likes to say, pointing to the 61-inch Sony TV in the living room. The TV is a symbol of achievement, he said. Leading by the example of hard work was the best teacher for his boys, Thomas believes.

There were early signs of drug trouble with Mark, who started smoking marijuana at 14. Steve Thomas said he would occasionally smoke marijuana in front of his boys. "I knew when to stop and I expected the boys to be just as responsible with drugs as I was," he said.

Then teenagers, Mark and Matt would help their parents empty the coin trays from pop, cigarette, candy, pinball and other machines. Every night the Thomases would bring bags of coins home. They said they wanted to be home for their boys.

The skimming began at least two years ago--a few hundred here and there that would soon end up in the eager hands of heroin dealers on the east side of Columbus, about an hour away. Both boys had cars and every other day would make the run to Columbus.

"Steve would come home and wonder where the money was going," Chris Thomas said. "We never dreamed our kids would take it."

Their sons had stolen at least $50,000, but Round 2, the in-house war, had only begun. More thefts followed--money, alcohol, prescription drugs, keys to vending machines. After throwing the kids out of the house, they changed the locks. Mark and Matt crawled through the attic and dropped in through a ceiling entry.

"We don't keep any money here, and what we do have we hide. We don't keep keys to anything here," Steve Thomas said. "It's like the enemy living right beside you, right under your nose."

Chris Thomas, 52, rattles off the specific dates, seared in her memory, of devastating events in the family's war with heroin. The car accidents, multiple DUI charges, the credit card spending binges, the relapses into drug use, the days they threw their sons out, and last New Year's Eve--when they were arrested for possession of heroin--are recounted, sometimes by the time of day. The question "Is he alive?" has worked its way into the daily vernacular.

Steve Thomas said he could shoot the person who turned Mark onto drugs, but he won't.

"I feel very betrayed, especially by my oldest son. They should give loyalty to their parents. They deceived me," he said. "I don't understand why my son doesn't have this hunger for knowledge and growth and achievement."

And he doesn't understand how anyone could take heroin.

"And you never will because you're not an addict," Chris Thomas said.

Their anger is mixed with guilt and second thoughts about all the long hours spent building a business. Chris Thomas clings to hope, however frail, and pulls the lyrics of music that Mark recently wrote, expressing remorse for his addiction:

"I was so numb and had no feeling to feel,

I was so dumb because I never realized this was real.

I still didn't care when you gave all you could give,

I just got around and got high with no reason to live."

That hope withered last week when she found a bag of heroin in Mark's room. Once again, Mark is out of the house. He is living temporarily in a family-owned apartment in nearby Mansfield, paying $20 a day to his parents. "I told him that was the last kind gesture," Chris Thomas said. "That was hard for me."

For now, Matt stays at home with his parents. He passed a milestone Friday. He has been drug-free for 90 days. That gives his mom cause for hope.

But neither parent expressed much confidence about their sons' future. They've been through too much to be optimistic. "I really get the feeling that Mark's never gonna quit," Steve Thomas said. "With Matt it can go either way.

The nightmare for the Thomases reflects, in part, the new availability of illegal drugs. The reasons for the surge in heroin use vary--a poor economy, proximity to big cities and increased competition among dealers.

Sgt. Rick Sexton of the Willard Police Department said the annual influx into the region of migrant workers from Mexico, a country that is a major source of illegal drugs, is also a factor. Some police officials point to the post-9/11 obsession with terrorism, saying it has diverted attention from the drug fight.

"The feds are claiming there are more drugs being seized at the border. But we haven't seen the effects of that locally. We haven't seen a spike in prices that would occur if interdiction efforts were working," Messer said.

That analysis is confirmed by addicts, who were accustomed to dealing with older adults and driving an hour to get their fix.

"When I first started, I had to go to Cleveland or Columbus to get it," said a heroin addict who now does undercover drug buys for METRICH in Mansfield. "It's much easier to get now. I don't have to run all over the place to find it. Now it's just down the street.

"People figure they can deal drugs because of terrorism and the war. They figure everybody's got their minds on that," the addict said.

An old industrial city of 50,000, Mansfield offers a grim reminder of possible consequences of drug trafficking--three state penitentiaries and the now-abandoned gothic prison used in the movie "The Shawshank Redemption." At SCCI Hospital, emergency room doctors have a ringside seat to the effects of the drug trade.

"We see a ton of prescription drug abuse, and I've seen more heroin in the last two years than I've seen in the previous 10," said Dr. Anthony Midkiff.

To be sure, heroin is not the only drug threat in the region. In some rural counties, crystal meth is a bigger problem. In Richland County, it's crack cocaine.

Paul Jones, an investigator with the Richland County Coroner's Office, said drug users are mixing prescription drugs. When combined with heroin, the powerful pain reliever OxyContin or methamphetamine, an addictive stimulant, "it can be just enough to push them over the edge, and they don't realize it," Jones said. 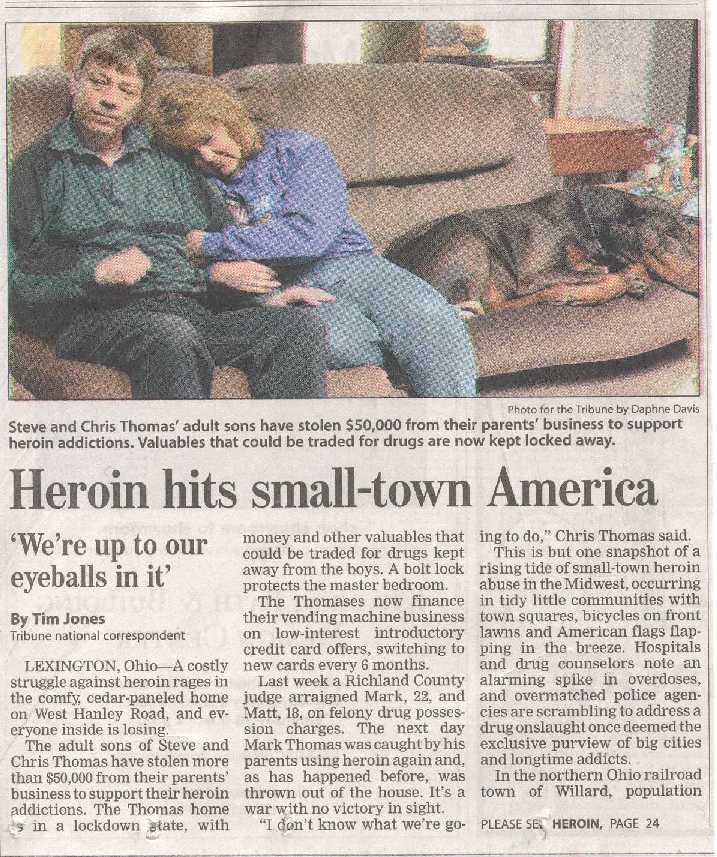 There is No War On Drugs