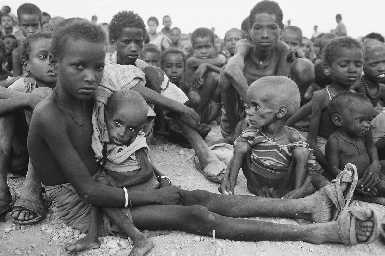 Every time I turn around I will hear over the news, or read in the paper of the tremendous over population of our planet. This is very interesting, because if you took the entire population of the world (roughly seven billion people), and stood them side by side in the state of Texas, each person would have 1000 square feet!  There are 261,914 square acres in Texas (that figures to seven trillion square feet).  So there is enough room just in Texas for every person in this world to get a piece of land 32 ft. X 32 feet!  And that's just Texas!  There is no overpopulation problem!  This planets just not big enough for the rich and the poor to live together, that's the real problem!

We are also told through various media sources, that we are using up the earths precious resources.  Yet we have the technology to find a license plate on a car by use of a satellite. We have the technology for our government to listen to every phone call going on in the United States by use of a computer. This computer has about 400 key words, that if it picks up on any of these words, will record the phone call.  We have the technology to put a computer chip contain all information on a person in the back of their hand the size of a grain of rice. We have the technology to put all information on a person on a strip in the back of their license, that can be run though a little machine and call up all info on that person.  Is the media trying to tell us that we don't have the ability to use the earths precious resources wisely to feed and cloth everyone on the planet?  I mean, our government pays farmers not to grow food.  Food in third world countries (e.g., India) is stored in buildings and left to rot.  What is going on here?  What would be the purpose of stressing a fact that isn't even true?  For those of you folks who have read the Iron Mountain Report, you will notice that they stress that the population would have to be at a controllable level.  They give many examples on how the population could be brought down to a level that would be controllable. The simple fact is that (according to them), there are simply too many people on the earth to be controlled at this point.

The following information is taken from the report written by Dr. J Coleman, (copyright 1992: 2533 North Carson Street, Carson City, NV 89706) "Global 2000: A Blueprint For Global Genocide."  I will be using quotes out of the report that should get every reader thinking.

In the first paragraph of the report Dr. Coleman wrote, he stated, "In 1979 I received a copy of a massive document commissioned by the Club of Rome and written by Cyrus Vance, three days after President James Earl Carter accepted it as official U.S. Policy....Global 2000 was unknown outside the Committee of 300 and carefully chosen official inside U.S. Government circles...." Keep in mind that many of the ideas for "Goals 2000" came from 19th century thinkers and writers such as Jeremy Bentham, William Petty-the Earl of Shelburne, H.G. Wells and Lord Bertrand Russell. (page one, paragraph three)

"In his book 'The Impact of Science on Society' Russell expounded his views on how the world's population ought to be controlled, so as not to become a threat to the privileged rulers...." (page three, paragraph five)

"We are also witnessing the Great Plagues of 1987-2000 in the form of AIDS, herpes, cholera, smallpox, tuberculosis....Aids, as we know, is an artificially induced virus which in effect is a cancer of the blood.  The first experiments were conducted in Africa on the border of Sierra Leone and Nigeria..." (page four and five paragraph's five and one)

"...namely that the world is populated with too many redundant people who must not be allowed to procreate and consume scarce natural resources..." (page five paragraph five)

"Bentham, Shelburne, Wells and Russell hated the idea of education for the masses....systems in operation that would allow people to have a vocabulary of no more than 500 words....might help to explain why Alexander King of the Club of Rome was commissioned to destroy education in America.....A destructed education system qualifying millions who can barely read and write....will ensure a society in which the majority can and will be easily manipulated by men like President Bush, Cyrus Vance, Lord Carrington and James Baker III." (page six, paragraph five)

"the mechanism of agriculture and the industrialization of the world was a terrible mistake....it has led to, and presently supports, a mass of people who perform no indispensable service....consuming the limited resources and destroying the environment of the globe....which they...the Committee of 300 representing the 'preordained leaders' of the world, say is theirs.....the remedy...lies in destroying an economy based upon agricultural and industrial expansion, because these support larger and larger populations of unwanted 'useless eaters'." (page seven, paragraph seven)

"The 'surplus population' thus created is targeted for death as 'useless eaters' in terms so clearly expressed in the Global 2000 Report." (page eight, paragraph four)

"By the year 2000 the world SHALL have rid itself of at least 100 million 'useless eaters' and by the year 2050, the number culled SHALL amount to not less then 400 million." (Page nine, paragraph four)

"By the year 2000...cases of AIDS in America will have reached 10 million, with millions more dying of AIDS-related diseases like tuberculosis, meningitis, cholera and more than likely, from bubonic plague. These events were planned and they are ongoing." (Page nine paragraph five)

The quotes I have given from Dr. Coleman's report sound pretty unbelievable. Or do they? Let's take a look at what is happening in our country. In the report, Dr. Coleman mentioned abortion and the gay life style. Abortion has killed about 36 million babies. Many in America have been conditioned to believe this is not murder, but it has reduce America's population by 36 million. The gay life style was encouraged, because with same sex partners, there is no procreation.

The education system in America as "dumb downed" our children so much that people are going to and graduating from college who can't read. Out-come-based Education does not teach the basics of reading, writing and arithmetic. It is training our children to become "global citizens".

The environmental movement is bringing man down to a level lower than the animals. In public schools, children are being taught to worship "Mother Earth". People can no longer do with their property what they want, but are accountable to the government if they want to add a room to their house, put a side walk up, cut a tree down.

Our weather is being controlled. Droughts, earthquakes, floods, hurricanes are rampant. People are starving to death because of droughts in their countries and the food being shipped to them is being left to rot in storage houses.

Aids is rampant. The behaviors that cause the spread of Aids is being encouraged by our government.

Civilian labor camps are being put up on military installations. Saw an interesting article in the Daily News, January 8, 1995. It was called "Doing Time On The Outside". It talks about using prisoners to do work, like construction or road work, while they are in prison to save the taxpayers money. A sign on outside the Department of Corrections said, "Inmate Work Crews, Reducing Costs to Taxpayers". As I was reading the article, the thought kept going through my mind, "Is this how they are going to get people use to seeing prisoner slave labor?"

Global 2000 doesn't seem to have a list of people who they want to get. It seems that they consider most of the population "useless eaters". I do imagine they will go after people fighting this first. There was no evidence that folks who keep quite and don't try to get the word out would be safe. No one will be safe. The Committee of 300 believe that the world is theirs to do with as they want. The rest of us are excess baggage.

This report reminds me of a scripture verse. Matthew 24:21-22, "For then shall be great tribulation, such as was not since the beginning of the world to this time, no, nor ever shall be. and except those days should be shortened, there should no flesh be saved: but for the elect's sake those days shall be shortened."