The Holyland Experience: A Theme-Park Where Jesus Dies Six Times A Week In Orlando, Florida...

Popcorn, sodas, Snickers bars... come and get it... see your Savior hanging on a cross. It's entertainment tonight! Oh boy, a crucifixion!!!

Snarling Roman soldiers whip and drag him, and somber audience members watch, all for a ticket price of just $25.50! Some quietly weep at a pageant bloody and cruel. It's a moving sight, and one that is replayed six times a week at 'The Holy Land Experience,' a Christian theme park in Orlando, Florida. T-shorts and souvenirs are sold, and money is made, mocking the crucifixion of the Savior.

Beaten and whipped by cruel Roman soldiers, Jesus Christ dies on the cross as onlookers watch in horror and sadness. Like a bizarre cross between “Jesus Christ Superstar” and “Disney World,” the 15-acre plays host to regular 'biblical recreations,' complete with show-stopping musical numbers, and a scale model of Jerusalem.

Being Orlando, the park is also packed with gift shops where faithful visitors can buy T-Shirts and replica Dead Sea Scrolls. Jesus suffers on the cross as Roman soldiers look on. The $17,000,000 theme park, which had been struggling until recently, is now thriving after a recent buyout by a wealthy TV production company.

The 15-acre set contains an exhibit on the Dead Sea Scrolls and a model of the garden tomb where Christ was supposedly buried. It's collection of Biblical artifacts is said to be biggest outside the Vatican. Gift shops throughout the site sell T-shirts and other merchandise.

As actors in full historical costume scurry about the set on their way to the next big musical number, visitors look forward to the daily Easter parade.

Recent performances range from The Ministry of Jesus, a 15-minute act where Christ heals a blind man and inspires a tax collector, to a 30-minute Southern gospel concert.

But of course it is the resurrection that pulls in the big crowds.

The climax of every visit to the 'The Holy Land Experience' is to get up close and see actors playing the major characters, including a very convincing Jesus, play out the final hours of Christ's life.

Audience members are encouraged to participate as Jesus walks among them with a wireless microphone.

However, its owners prefer not to call it a theme park but a 'living Biblical museum'.

This is so sad, i.e., that anyone would reduce the sacredness of the cross of Jesus Christ to a mere performance. Isn't anything holy to people anymore?

Although seemingly innocent to most people, Walt Disney is desecrating the holiness of Jesus Christ and the crucifixion. Any other religious group would go ballistic if their most sacred and holy beliefs were trodden upon by greedy businessmen. How much more is it blasphemy when Walt Disney, who sponsors an annual week of homosexual debauchery, hosts a "Holyland Experience"...

There’s a new event this year during “Gay Days at Walt Disney World,” which begins June 2 and runs until the 7th.  For all the “homosexual” boys and girls arriving in Orlando, there will be a “Gay and Lesbian Youth Meeting” at Cinderella’s Castle.  This event is being billed as a place for kids of “ALL AGES” to “meet each other to make this day even more special!” (All exclamation marks and caps are theirs.)  Not surprisingly, this event will take place behind Cinderella’s Castle and at the entrance to Fantasy Land.

This is just sick, and the owners of Walt Disney ought to be greatly ashamed of themselves. They are sold out to the Devil. The crucifixion is not something to be exploited to make money, especially by the same people who promote "Desperate Housewives," and an annual "Gay Days" event. Has Walt Disney no shame? Walt Disney doesn't care about Jesus Christ, for if they did they wouldn't blaspheme His holy name in their moving, Underdog, with the slogan ONE NATION UNDER DOG. Walt Disney is taking God's name in vain with their Holyland Experience. The Corporate clowns at Walt Disney are only out to make a buck! "For the love of money is the root of all evil..." (1st Timothy 6:10).

Then there's Walt Disney's blasphemous The Bridge to Terabithia, which demonizes Christian parents, denies that God would ever send anyone to Hell, and portrays the Christian father as being Satan in the movie. Walt Disney is of the Devil, and Christians need to stop supporting their vile filth. God HASN'T lifted His ban against Walt Disney.

It's wrong that an organization (Walt Disney) which sponsors GAY DAY every year, would also sponsor a church for guests. It's bad enough that they exploit Christ's sacrifice on the cross as a paid attraction to make money. Now they've even got a liberal church for visitors to attend. Walt Disney is catering to every walk of life, whether heathen or backslidden Christian. No mature Christian would visit Walt Disney. Check out what they're teaching at the MAINGATE Church Of Christ...

“The sermon will likely be from 20 to 30 minutes. We think you will find it refreshingly Bible entered. At the close of the sermon, the preacher will extend an invitation. This is simply an expedient time to invite those who are moved to do so to make a commitment or request prayer support. He will encourage those who wish to “respond” to do so while the congregation sings a hymn.”

[typo theirs... "entered" above likely should have been "centered." Also, emphasis added "to make a commitment."]

SOURCE: Welcome to Main Gate Church of Christ - Our Services

Make a commitment? That's not the Biblical Gospel. That's their lame plan of salvation... to make a commitment! Salvation is a new birth, not making a commitment. The Bible says, YE MUST BE BORN AGAIN! (John 3:5).

The Church of Christ is of the Devil, who also teach that water baptism is required for Heaven. They also have a perverted understanding of what repentance means. The Church of Christ is a false religious cult. They have high moral standards and many good people are part of the organization, but they are not saved because of their self-righteousness views on salvation. Eternal life is a free gift that based solely upon Christ's imputed righteousness.

1st Corinthians 15:1-4 defines the Gospel as Christ's death, burial and resurrection. If we acknowledge our sins for breaking God's commandments and receive Christ's sacrifice as payment for our sins, then we are born-again eternally.

The Religious Racket In America 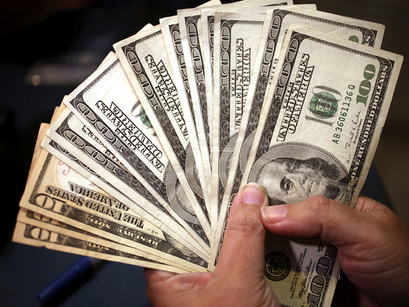 Whether it be K LOVE's Contemporary Christian Music (CCM) radio station that pays it's CEO $463,420 a year, or Walt Disney's $17 million crucifixion theme park (which has been very profitable), or AnswersInGenesis.org (beware of Ken Ham and Paul Taylor) who raked in $22 million in 2010... they're all out to make a buck!

The Gospel is nowhere to be found! I will expose any professed Christian as a fraud who makes a 6-digit salary for allegedly serving God. A so-called servant ought to receive a servant's reward. The average American today in 2012 makes about $24,000 a year. Depression has hit America and is only going to get MUCH worse. The crimes of the Wall Street banks, Federal Reserve scam and Washington officials cannot be hidden any longer.

God deliver us from money-hungry people in the ministry who masquerade as Christians. Beware of fat-cat charities that pay 6-digit salaries to their executives. God give us some men of God like John the Baptist who speak the truth at all cost without reservation or compromise!

If God Spared Not His People From Judgment, Neither Will He Spare America!

Isaiah 58:1, “Cry aloud, spare not, lift up thy voice like a trumpet, and shew my people their transgression, and the house of Jacob their sins.” God hasn't changed. The same God Who hated the sins of Israel hates the sins of America. If God spared not His own people, do you think He will spare America? Not a chance in a million!

Romans 11:19-21 and 23, “Thou wilt say then, The branches were broken off, that I might be graffed in. Well; because of unbelief they were broken off, and thou standest by faith. Be not highminded, but fear: For if God spared not the natural branches, take heed lest he also spare not thee ... And they also, if they abide not still in unbelief, shall be graffed in: for God is able to graff them in again.” This Bible passage speaks of the Gentiles and the Jews. God gave up on the nation of Israel in 586 BC, giving them over to the Babylonians in war. Israel was cut off and went into 70 years of captivity for their sins (Jeremiah 25:11). God said, “enough!”

Yet, God didn't forsake His people (Romans 11:1-2). Many people today have been misled by arrogant, unsaved, Jews into think that biological Jews are God's people, but the Bible plainly teaches this is not the case at all. As you just read in Romans 11:19-21, the Jews were cut off for UNBELIEF. Unbelief is the only sin that can keep a person out of Heaven. Galatians 3:26-29 teaches that only those who are in Christ Jesus by faith are God's people. Whether Gentile or Jew matters not, all are one in Christ. It matters not whether you're rich or poor, free or imprisoned, great or small, healthy or afflicted... we all are one in Jesus Christ. We who believe on the Lord Jesus as the Christ, the Son of the living God, are all God's children by faith (Galatians 3:26).