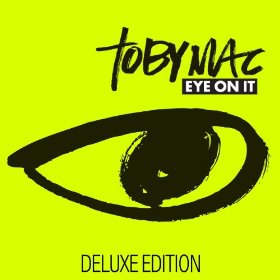 I've been exposing TobyMac as a Christian fraud for many years. The album cover to the left is Toby's new and latest album which just came out on August 28, 2012. Look at the All Seeing Eye. This latest album further evidences who Toby McKeehan serves, that is, Satan!

Sadly, most young people today don't care. They are knowingly following the New World Order, selling their souls to the Devil. You can hear a short clip of Toby's new album and song, EYE ON IT at Amazon. Please read, New World Order Occult Images In CCM Music! You either want to know THE TRUTH or you don't. It is obvious that Satan is behind the music industry (and that certainly includes CCM). Toby McKeehan (born 1964) is now 47 years old in 2012.

The Bible teaches in 2nd Thessalonians 2:10 that the masses of this world will openly receive the Antichrist when he comes, being taken “with all deceivableness of unrighteousness in them that perish; because they received not the love of the truth, that they might be saved.”

Wow, what an amazing Scripture! This truth is profound. Have you ever heard the old country song which says, “You've got to stand for something, or you'll fall for anything.” Well my friend, if you don't embrace the truth of THE GOSPEL of the Lord Jesus Christ, then you are open game for the Devil to hunt down and kill. Literally, the Bible is teaching that those who don't embrace the truth of the Word of God, will instead be deceived by the Devil.

We already see this truth evidenced today in the world. Most Jews REJECT the Messiah, Jesus Christ. And so instead they are all waiting within the Judaism false religion for another messiah, the Devil's messiah, and he will be the Antichrist.

Also, the Shiite Muslims REJECT Jesus as the Messiah and are waiting for an Islamic messiah, called al-Mahdi, who will lead Islam to its rightful place as the dominant religion in the world. Their messiah will be the Antichrist when he comes. Do you see what the Devil is doing? Satan has taught all of his false religions to expect the Antichrist in the form of a messiah; but it's not the Messiah as prophesied in the Bible. The world will worship the man of sin when he comes, that is, the Antichrist. They will be required to worship his image and receive a mark in their forehead and right-hand, or else be killed (Revelation 13:15-17).

Albeit, Christianity teaches that the Messiah has already come and ascended into Heaven (Acts 1:9), and is now seated on the right-hand of the Father (Colossians 3:1-3). His name is Jesus Christ. The Lord is coming again. Here is an easy way to remember the Biblical comings of Christ:

Anytime that you see an All Seeing Eye or The Great Pyramid, you know that the artist has totally sold their soul to the Devil. 1st Kings 21:20, “thou hast sold thyself to work evil in the sight of the LORD.”

The Great Pyramid and The All-Seeing Eye symbols are used today to magnify and project the image of the coming Antichrist, preparing the world stage for when he appears. I believe he is alive today. This is why Nebuchadnezzar erected a 90 x 9 foot golden image for the people to worship at the sound of the music (Daniel 3:2-7). That is, the image projected a bigger-than-life image of Nebuchadnezzar. Images are powerful, which is why the occult loves them.

The Antichrist will do the same thing as did king Nebuchadnezzar (Revelation 13:15). It is not mere coincidence that we are seeing occult IMAGES all over the place today, in our faces. The world is being prepared to worship the coming Antichrist. If the coming of the Antichrist weren't near, then we wouldn't see all this preparation for his coming. That ought to either excite you if you are a born-again Christian, or frighten you if you are an enemy of the cross of Jesus Christ. We are now living in the End Times my friend. END

Tobymac's Music Is Of The Devil

Why Michael W. Smith is God's Enemy ...and a BIG PHONY!