"Woe unto them that call evil good, and good evil; that put darkness for light, and light for darkness; that put bitter for sweet, and sweet for bitter!" -Isaiah 5:20

Some heathen recently came up with the phrase... WICKED COOL, and it caught on like wildfire.  This is a horrible term that blasphemes the Word of God.  The word "cool" informally means something that is "very good."  Wicked by the same token has actually been perverted in modern English to mean "strikingly good, effective, or skillful" (SOURCE: http://www.thefreedictionary.com/wicked).  This is so evil.  Listen my friend, there is nothing "wicked cool" about making a mockery of the Word of God.  The problem is that God NEVER uses the word "wicked" or "evil" in any good sense in His Word.  So what right do men have to change and corrupt the ONLY words we have in existence today defining the awfulness of sin?  If the words evil and wicked mean good, then what words convey the sinfulness of sin to today's youth?

Just to give you an idea how serious the issue is, take a look at this Google search under "wicked cool"...

I find it interesting, and incriminating, that the unsaved world who rejects Jesus Christ and the Bible, is saturated with Satanism all around them and don't even realize it.  The same Devil who is going to take them to Hell is mocking them right before their very eyes.  Yet they are filled with sinful pride, conceit, and arrogance.  It couldn't be any clearer that Satan is the god of this world (2nd Corinthians 4:4). 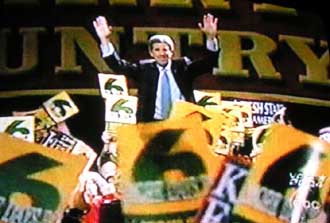 John Kerry campaigning in October of 2004!

Here's a photo of Condoleezza Rice at the United Nations in 2005 with the numbers 666 behind her.  Notice how the logo below was cleverly designed, celebrating the UN's 60th anniversary, to appear as 666 above.

Most people today don't realize that they're on the road to Hell without Christ.  They think some religion is going to save them, or their own self-righteousness.  You know, if I didn't believe the Bible for the Bible's sake, then I'd believe it because of all the Satanism in society.  It couldn't be more obvious.  Here's something that'll cause you to lose some sleep tonight... The Occult Connection. 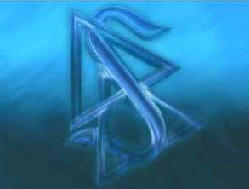 Above is the logo for the Church of Scientology cult.  Notice the two illuminati Pyramids!

Satan, as the god of this world, demands allegiance from those who would be made rich, powerful, and famous.  This is clearly evidenced by the rock-n-roll performers of decades ago who are still being promoted today--most of whom incorporated Satanism or the occult into their music and album artwork.  See for yourself--such rockers as the Beach Boys, John Lennon and Paul McCartney, the Rolling Stones, Led Zeppelin, and hundreds more who idolized the Satan worshipper, Aleister Crowley.  Satanism is everywhere!

There is NOTHING Cool About Being Wicked!

No parent should ever allow their child to misuse Biblical terms.  It is a mockery of the Word of God to call something good, evil.  In fact, Isaiah 5:20 condemns doing so... "Woe unto them that call evil good, and good evil; that put darkness for light, and light for darkness; that put bitter for sweet, and sweet for bitter!"  God forbids us from calling anything good, evil.  One might argue that the term "wicked cool" is only an innocent use of words; verses someone actually trying to condone doing evil.  However, young people today are confused enough as it is, and the Devil's crowd aims to obliterate any sense of moral guidance remaining.  In effect, young people are without a moral compass nowadays, following the immorality of sexual degenerates like Britney Spears...

Britney Spears, completely "removes the sheets" in her song "Soda Pop." She sings, " . . . we might start riding to the music tonight. . . a WICKED TIME to the end . . . we'll flex tonight until they break down the door . . . It's cool Britney when we get down on the floor. . . and we go on and on until the break of dawn"

Woe unto America!  Britney Spears is more dangerous to your child than arsenic poison or cyanide.  Whores like Madonna have corrupted the morals of tens-of-millions of girls.  Listen to what one of my web visitors wrote to me today concerning Madonna...

Oh Thanks and I see you have stuff about Madonna I have also someone that is obsessed with that sicko and all she thinks of is Madonna. My husband and I think this young girl puts Madonna her God.  I was there visiting her in 04 and her husband and her in July that year went to the concert. Later on a few months later when I was visiting. They was talking about her concert that they missed the final one because Madonna with kids there told the audiance to take off thier tops man and woman and to say they don't give an F. Madonna is someone that is not welcome in our home and the others around her.  I am glad Christians are taking a stand against this wrench.

Would to God every Christian felt the same.  Some of my biggest critics are professed Christians who are involved with the sin of so-called "Christian" rock-n-roll music.  There is nothing even remotely Christian about the Devil's music.

The World Hates Jesus Christ and All Christlike Believers

Woe unto America!  While preachers are mocked, ridiculed, and maliciously attacked all across America, the Devil's crowd DOESN'T even attempt to live for God.  Britney Spears and Madonna couldn't care less about the things of God, or the families they destroy through the lasciviousness they cause.

I've worked in the secular workplace my entire life.  I've seen Christian men, who try to live right, but try as they may--are not above sin.  You can only work with somebody for so long before you begin to see their faults and sins--and when a believer falters, the wicked gnash upon him with their teeth... "The wicked plotteth against the just, and gnasheth upon him with his teeth" (Psalm 37:12).  Hypocrites!  The same people who condemn the righteous man for his one sin, are saturated with sins beyond measure, and they couldn't care less about even trying to live for God.  I've seen men who shamelessly drank booze, gambled, went to strip-joints, and cursed in God's name continually, hypocritically roast any believer who even trips in their Christian walk.  Hell will be hot!

It is a Sin to Make a Mockery of the Bible

There is much mockery of God and the Bible these days.  Late night TV host, Conan O'Brien, in January of 2007 portrayed Jesus Christ as a homosexual voyeur on his show.  Conan has also been praised by millions for singing the blasphemous song, "I'm a Gonna Go To Hell When I Die" (hear for yourself).  Conan has become so popular that he is scheduled to replace soon-to-retire, Jay Leno, as NBC's late night host on The Tonight Show.  Satan is laughing.  Do you know why the world mocks God as such?  It's because they hate God, the Bible, and believers who are speaking out against sin, as God commands us to (Psalm 94:16; Isaiah 58:1; Ephesians 5:11).  The Apostle Paul spoke the truth and was hated for it... Galatians 4:16, "Am I therefore become your enemy, because I tell you the truth?"  Jesus spoke the truth and people didn't believe Him either, "And because I tell you the truth, ye believe me not" (John 8:45).

Ephesians 2:2 states, "Wherein in time past ye walked according to the course of this world, according to the prince of the power of the air, the spirit that now worketh in the children of disobedience."  It does not surprise me that the unsaved world enjoys cursing in God's name, perverting the truth into a lie, and making a mockery of the Bible--because the spirit of Satan is working within them, just as Ephesians 2:2 says.  A common mockery of the Bible is the phrase "sinfully delicious."  Again, Biblical terms should never be taken lightly, especially when referring to something as serious a matter as sin.  Do you think it's "cute" to God when people refer to things as "wicked cool," in a nation that has the BLOOD of 48,000,000 aborted infants on it's hands?  What about America's homosexual parades? ...or, Sin City?  The term "wicked cool" is of the Devil, and should never be allowed in a Christian home.