"For nation shall rise against nation, and kingdom against kingdom: and there shall be famines..." -Matthew 24:7

"Every gun that is made, every warship launched, every rocket fired is, in a sense, a theft from those who hunger and are not fed, those who are cold and are not clothed. (Dwight D. Eisenhower, April 16, 1953)

The Gulf War alone cost the Allies a half billion dollars a day, or about $350,000 a minute.

A fighter plane costs around $25 million each.

A Tomahawk missile: about $1.3 million. 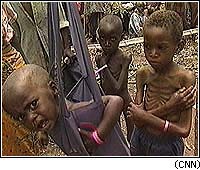 Translated into more everyday expenses, for the price of this one missile, a school full of hungry children could eat lunch every day for 5 years.

Throughout the 1990's more than 100 million children will die from illness and starvation. Those 100 million deaths could be prevented for the price of ten Stealth bombers, or what the world spends on its military in two days! 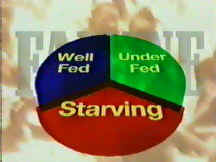 Since you've entered this site at least 200 people have died of starvation. Over 4 million will die this year.

However, the world can produce enough food to feed its expanding population. While some famines are caused by drought or other so-called natural disasters, children are more likely to be starving because of man's inhumanity to man--war, 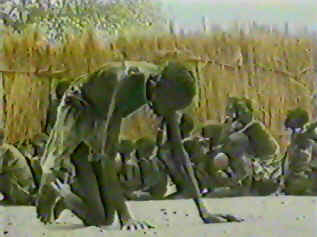 Such as the insurmountable debt many developing countries' owe to international creditors who enticed them to take out huge loans and are now holding the debtor nations in economic slavery, extracting exorbitant interest rates that ensure that the poor grow poorer and the rich lenders grow richer.

While these children die of hunger, rich Western nations burn millions of tons of food a year to keep prices high. Famines are largely a result of Man's corruption and greed and unwillingness to care for others.