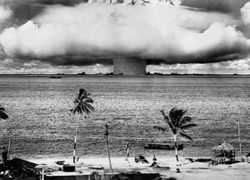 Some 200 Soviet-era nuclear warheads have disappeared, the head of the Ukrainian Communist Party charges.

According to Pravda.ru, Pyotr Simonenko said that there were originally 2400 nuclear warheads in Ukraine, although only 2200 can be accounted for. Nobody, he said, has any idea where the other 200 deadly warheads have gone.

"Out of 2,400 nuclear warheads which were on Ukrainian territory, the withdrawal of only 2,200 warheads has been verified. The fate of the remaining 200 warheads is unknown," Simonenko told Pravda.ru.

And his charges were backed up, Pravda.ru writes, by a member of a Ukrainian parliamentary investigation who admits that some of the warheads have been "lost."

Simonenko's revelation was downplayed by the Deputy chief of the Ukrainian Army Headquarters, Nikolay Goncharenko, who insisted that Simonenko’s charges had no basis in fact.

Goncharenko told Pravda.ru that the handling of all strategic offensive arms is now under the authority of Russia, a statement, Pravda.ru observed that does nothing to explain why 200 nukes appear to have vanished.

According to the Council on Foreign Relations, Ukraine, along with two other former Soviet republics Belarus and Kazakhstan, where the Soviets based many of their nuclear warheads, were supposed to have safely returned their Soviet nuclear weapons to post-communist Russia by 1997. Simonenko charges that his country can't account for all of the Soviet warheads or the paperwork concerning the 200 warheads allegedly given back to Moscow.

The missing warheads are raising concerns because of the close connections between the governments of Iraq and Ukraine.

"Iraq," he wrote, "is exploiting its growing links with Ukraine in an effort to obtain weapons technologies, arms control experts say.

"They say the government of the former Soviet republic has been taking an active role in organising direct ties between Ukrainian companies and Iraq."

Warner quoted Timothy McCarthy, a former United Nations weapons inspector as saying "For some years there was an intensive defense-technology relationship between Ukraine and Iraq. This appears to be re-emerging and we don’t want to repeat the mistakes of the past."

Warner revealed that his newspaper has heard recordings "of what appears to be a conversation between Ukraine president, Leonid Kuchma, and Yuri Alexeyev, director of Yuzhmash, Ukraine`s largest rocket maker, [where] the men mention Iraq, Iran and rockets."

The recordings, Warner wrote, were supplied to the Financial Times by Mykola Melnychenko, one of Kuchma`s former bodyguards. Kuchma and Alexeyev denied having supplied missile technology to Iraq, but Kuchma, while denying the content, admitted that his conversations had been recorded.

Ukraine opened an embassy in Baghdad in 2000 and its ministry of foreign affairs accepted the credentials of Yuri Orshansky, a Ukrainian businessman, as an honorary consul for Iraq.

Warner reported that Orshansky told Ukrainian media he has visited Iraq 40 times since 1992, but denies breaking international sanctions. In 2001, Orshansky organised a trade fair in Baghdad. "Even if they want to create a nuclear bomb, we will study this," he was quoted as saying. "After all, in 50 years, maybe we will offer our services."

A Nuclear Needle in a Haystack: The Cold War's Missing Atom Bombs