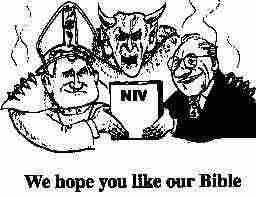 The owner of the exclusive printing rights to the NIV, Rupert Murdoch, was just made a Knight by the Pope. Murdoch had put the NIV under the same umbrella as the TV Guide, which he also owned.

About once every ten years the apostate Fundamentalists and Conservatives adopt some substitute for the Holy Bible which they hope to establish as an “authorized version” for “serious students of the Bible.” The line is standard. It is a Madison Avenue “oldie” and is used over and over again.

Among the rotten pieces of trash parading today as Bibles (the ASV, and the NASV, the RSV, the NRSV, and the DEAD Paraphrase—commonly known as The Living Bible) is the NIV, one among several dozen Roman Catholic translations from the Jesuit Greek Text of Rheims in the Dark Ages (1582). The NIV is the darling of Moody Bible Institute, Wheaton, Illinois, many Charismatics, and TV personalities like MacArthur and Swindoll who have to compromise to keep their income.

Often we get letters asking, “What is wrong with the NIV?” You would have to have access to our mail to appreciate the humor of such a situation, for the same things are wrong with EVERY translation that America has turned out since 1800. To go over and over the ground is a burden beyond belief, but to help out the sincere reader we suggest that he simply obtain a copy of the NIV (don’t waste money buying one; just borrow one from any apostate Fundamentalist) and look up Matthew 17:21 and Matthew 18:11 in it. After all, if “man shall not live by bread alone, but BY EVERY WORD that proceedeth out of the mouth of God” (Matt 4:4), you certainly would enjoy reading Matthew 17:21 and Matthew 18:11.

Gone with the wind.
Vanished into thin air.

You say, “How could he do that when he didn’t have them and had never seen them”? Easy. All con-men in the Mafia are “hit” men for a price, and no sin is too low for them to stoop to. They simply lied. They published their lie and called it the NEW INTERNATIONAL VERSION.