NIV Corrupts the Doctrine of Jesus in at Least 38 Places!

Philippians 2:9-10, “Wherefore God also hath highly exalted Him, and given Him a name which is above every name: That at the name of Jesus every knee should bow, of things in heaven, and things in earth, and things under the earth.” 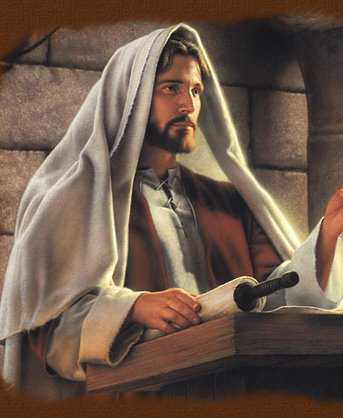 To no surprise, Paul's admonition against “science falsely so called” in 1st Timothy 6:20 is gone too, and there are no longer any fables to avoid. Of the 54 times "hell" is mentioned in the King James Bible, the NIV reduces it down to 14 times. The King James Bible states in 1st Timothy 3:16 that "GOD WAS MANIFEST IN THE FLESH"; but the NIV waters it down to... he was revealed in a body.

Repeatedly the NIV attacks the Doctrine of Christ, by diminishing His deity and character. The word “Godhead” is completely gone from the NIV. Since the word “Trinity” is not in the Bible, the word Godhead is very important. Satan gathered all the different religious denominations together and asked them what kind of Bible they would all accept. One denomination said, remove the word “Godhead.” Another apostate hollered... remove the word “Calvary!” Some heretic suggested that the words “bottomless pit” be removed. The word “hell” in Psalm 9:17 was changed to “grave” and in another corrupt version “realm of the dead.”

Jesus is the name above every other name; King of kings and Lord of lords. Jesus, Jesus, Jesus, sweetest name I know. It is tragic, and telling, that the translators of the Godless New International Version have corrupted the precious name of Jesus in 38 places!!!

There is a woeful crime that has been committed against the Savior in all modern translations of the Bible. namely, the publishers shave malicious removed all mention of “worshipping” Jesus, and have diminished the word to kneeling instead. Every mention of the word “worship” in the precious King James Bible has been corrupted, water-down, and changed to a mere “knelt.” In the New International Version [NIV] of the Bible, there is no mention of anyone worshipping the Lord Jesus Christ, but only that people knelt before Him. But one can kneel before a king without worshipping him. The real Bible says that people WORSHIPPED Jesus, as God Almighty. If I drop something and bend over to pick it up, I am not worshipping that thing. The Devil doesn't want people worshipping the Son of God. Thank God for the  precious KING JAMES BIBLE that shows us that people worshipped Jesus!!!

It is evil and wicked that men have diminished the deity of Jesus Christ, and have taken away the due worship that Jesus is worthy to receive. Certainly, every soul on earth ought to worship Jesus. Philippians 2:9-10, “Wherefore God also hath highly exalted Him, and given Him a name which is above every name: That at the name of Jesus every knee should bow, of things in heaven, and things in earth, and things under the earth.”

Throughout history, the enemies of Christ have tormented Christians, asking “where is your God?” The Bible says that God has only delayed His coming to give men a chance to repent (2nd Peter 3:9). God's love has a limit, and that limit is the moment you pass into eternity without Jesus Christ. If you die in your sins, there is no remedy! You have a choice my friend—to receive Jesus as your personal Savior (John 1:12), or burn in the Lake of Fire forever and ever without hope (Revelation 20:15). Christians around the world are being persecuted and killed. ...

As the country’s economic crisis worsens, North Koreans turn to faith despite the regime’s vicious persecution. In reprisal, Kim Jong-il orders another crackdown.

Seoul (AsiaNews) – North Korea’s Stalinist regime has discovered some underground Christians in a house church in Pyongan Province. All 23 who met to celebrate a religious function were arrested. Three were tried and given the death penalty, which was swiftly executed, sources told AsiaNews. Confirmation about the incident also came from the North Korea Intellectual Solidarity, a group of North Korean exiles.

According to the sources, the arrests and executions were carried out in mid-May. “At that time, right after the disastrous currency reform, police discovered 23 Christians in Kuwal-dong, Pyungsung County, in Pyongan Province, who met at an underground church. After their arrest, they were interrogated at length. Eventually, the group’s “ringleaders” were sentenced to death and executed. The others were sent to Kwan-li-so (Penal labour colony) No 15 in Yodŏk.”

These North Koreans discovered underground Christianity when some of them traveled to mainland China for work.

“As the authorities fear the spread of religion, many area residents are rounded up and interrogated for days,” the sources said. However, “they cannot help it because the situation is so desperate that people are going back to religion. Such sentences are meant to scare people.”

North Korea denies freedom of religion absolutely. Officially, the country has three Christian places of worship (one Catholic and two Protestant churches) and four Buddhist temples, but only in the capital Pyongyang. No one has been able to confirm how many exist in the rest of the country. Accounts about their number by foreigners who have traveled around the country vary.

The only cult allowed is that of ‘Eternal President’ Kim Il-sung and his son, the ‘Dear Leader’ Kim Jong-il.

We are so blessed in America to have freedom of speech, but it is beginning to come to an end. We're starting to see persecution and prosecution of Christian in the United States. Here's just one of hundreds of disturbing stories in the news. Couple Fined $300 for Having Bible Study in Home Without Permit (Communist U.S.A.!). We're going to see more Police State persecution of believers who gather for Bible studies without a state permit. Freedom will come to an end in America, because we have used our freedoms as an opportunity to sin... pornographer rights, abortionist rights, feminist rights, homosexual rights!

To no surprise, Satan has relentlessly tried to corrupt the Bible in recent decades. This is why there are hundreds of different Bible versions today. It couldn't be more clear that Satan is behind the NIV and all modern translations of the Bible. Just as 1st Timothy 6:10 tells us, the love of money is the root of all evil. The publishers wanted to sell Bibles, so they got all the different religions together and asked them what kind of Bible they wanted. The result is a disastrous corruption of the Bible, which teaches in Philippians 2:6 that Jesus is no longer equal with God. It is blasphemy!!!

According to Wikipedia, most churches in the United States are now using the NIV Bible. It is apostasy! If you love Jesus, then you'll use the Bible that uplifts His precious name, accurately teaches the Doctrine of Christ, and speaks the truth without apology nor compromise.

The word “sodomite” is still in the King James Bible. If you want a gay-friendly version that caters to homosexuals, then you use the NIV garbage that says “temple prostitutes” instead. America doesn't have a problem with temple prostitutes, but there are homosexuals (sodomites) all over the place. King Asa drove the sodomites out of the land and that's what Jesus will do when He returns! The wicked are not on God's side my friend. Whose side are you on?

May I say friend, worship Jesus!!! If you love Jesus Christ, then you ought to love the trustworthy King James Bible that uplifts and exalts our precious Lord and Savior, JESUS CHRIST!

Isaiah 51:7, “Hearken unto me, ye that know righteousness, the people in whose heart is my law; fear ye not the reproach of men, neither be ye afraid of their revilings.”