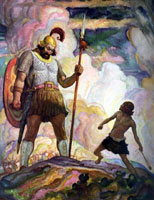 "Shadrach, Meshach, and Abed-nego, answered and said to the king, O Nebuchadnezzar, we are not careful to answer thee in this matter.  If it be so, our God whom we serve is able to deliver us from the burning fiery furnace, and he will deliver us out of thine hand, O king.  But if not, be it known unto thee, O king, that we will not serve thy gods, nor worship the golden image which thou hast set up.  Then was Nebuchadnezzar full of fury, and the form of his visage was changed against Shadrach, Meshach, and Abed-nego: therefore he spake, and commanded that they should heat the furnace one seven times more than it was wont to be heated." -Daniel 3:16-19

Shadrach, Meshach and Abednego were NOT about to commit idolatry by bowing to king Nebuchadnezzar's 90-foot tall golden image.  They courageously said to the heathen king (who was known for torturing people)..."We are not careful to answer thee."  They told this heathen king that they didn't have to think about his offer to spare their lives, they weren't bowing down!  Now that's faith in God!  The unsaved crowd and backslidden believers would have called them stupid.  I wonder how many professed believers would renounce their faith if they were threatened with death as were Shadrach, Meshach and Abednego?  The world calls Christians fools.  The world thinks Christians are stupid for going to the mission field...for giving up the security of a nice home, a steady career, family and friends, etc.  Why do they go?  By faith!  Is there not a cause?  Yes, there is a great cause...the saving power of the gospel of Jesus Christ!  This world is going to hell without Christ...we can make a difference!  We must take a stand for God!

These three courageous young men refused to bow to the government (Nebuchadnezzar).

There is soon coming a day in America where Christians in churches will be forced to battle the government like never before (if the Lord doesn't return first).  As Sodomites are gaining more and more control over our legislative processes (and all other areas of government, education, etc), there will come a day when churches will be FORCED to recognize sodomite ministers or lose their tax exemption.  Ultimately, Christians will be labeled as terrorists for standing against homosexuality and abortion.  Even now, many cities are passing ordinances to remove protestors from outside of abortion clinics.  Thank God for the courageous souls who are willing to stand up for what is right!!!

King Nebuchadnezzar was so angry at Shadrach, Meshach and Abednego for not bowing to his idol that he ordered his guards to turn up the flaming furnace seven times hotter.  How do you make fire seven times hotter?  You simply add seven times the normal amount of fuel and burn it all simultaneously.  The guards added so much fuel that the fires raged and burned them alive.  Can you imagine a furnace so hot that it would kill anyone who neared it?  The wicked king had those three brave lads cast into the raging furnace.  Miraculously by God's power, not a hair on their body was singed.  Don't try this at home, most Christians throughout history who were burned at the stake or boiled alive in oil screamed in blood-curling horrific screams until all life in them was gone.  Though Daniel was spared the appetite of the starved lions, thousands of Christians during the days of the Roman empire were not so fortunate.  They were torn apart piece by piece until all life was gone.  The history of Christianity is a trail of blood.  They took their stand for God!

Stand up!!!  Open wide you mouth against the evils of our day!

Shadrach, Meshach and Abednego stood against the wicked law of a heathen king (government).  There will come a day in the United States when ALL citizens will be required to receive an implanted microchip.   It will be implemented in stages.  The government will require all students going into the public school system to have their children micro-chipped.  Most parents will happily (and mindlessly) comply.  The government will probably create a state of emergency (such as the massive disappearances of children).  Microchips and global tracking sensors will be the answer.  Parents will rush in like a herd of animals stampeding to eat dinner.  If you don't think this could happen, look at 911.  The Twin Trade Towers were mysteriously blown up in New York city and then Americans foolishly surrendered their Bill of Rights in exchange for Patriot Acts I and II (I should say "unpatriot" acts).  We need more Shadrachs, Meshachs and Abednegos!  We will lose our freedoms if we don't fight to keep them!  Though the government may claim to have good intentions now to stop terrorists, the technologies being implemented and the laws being passed WILL ensure that our children's children won't live in freedom anymore.  Just as Sodomites were once arrested, killed and banned from society, so will Christians someday once again be.  Who are the real terrorists?  Where is this mysterious group called Al Qaeda?  Would you believe that they are a creation of our own government?  It's true!  When you hear "Al Qaeda," think CIA.  How much lower can America go morally before we cease to function as a nation?  How much further can we go trillions of dollars into debt as a nation before the lenders foreclose on what is rightfully theirs?  Did you know that the Environmental Protection Agency was started under President Nixon to allow the collateralizing of American debt by giving up the mineral rights to one-third of American land?  Learn more here.

It's high treason!  Benedict Arnold was a good man compared to our government over the past couple decades.  We are being swindled out of our country and the average person doesn't even realize it (or doesn't care).  We have become SOFT as a nation.  We have become complacent.  Remember the words of Thomas Jefferson, "Evil Triumphs when good men do nothing."

"And whosoever will not do the law of thy God, and the law of the king, let judgment be executed speedily upon him, whether it be unto death, or to banishment, or to confiscation of goods, or to imprisonment." -Ezra 7:26

Our nation does not do the Law of God.  Thou shalt not kill is still in the Bible.  Who will stand up for God?  Each and every woman in America who has an abortion chooses to have an abortion.  No one makes a woman murder a child as in communist China.  Women can try to blame their husbands, society, their family, even the child, but they've got no one to blame but themselves.  The U.S. government is directly responsible for legalizing, promoting and sponsoring planned murderhood.  President George Bush Jr. may act like he's against abortion but he was the one who approved giving a hundred million dollars to planned parenthood.  In case you don't know "planned parenthood" does everything they can to convince mothers to give up their babies and have abortions (most of which are black mothers, see www.blackgenocide.org for the sickening truth).  Planned Parenthood founder, Margaret Sanger, stated that she wanted to genocide the black race.  Do your homework, you'll never hear this truth on TV).  I hate TV.  Lies, lies and more lies.  The government lies to us more than anyone.

I love that little phrase in Daniel 3:16-19..."But if not!"  They said, "We won't bow king and we make no bones about it...burn us if you will."  Can you imagine.  Today, your ignorant believers would have called them punks, troublemakers.  Many Christians think it is always rebellious to disobey authority.  If this were true, then did our founding fathers sin by rebelling against the government in England?  Of course not!

It takes a good man to break the rules made by bad men.

There will be a revolution in this country someday.  Christians and patriots will be arrested, killed and imprisoned as terrorists.  Mark my words.  The Bible will not be accepted much longer, it pronounces the death penalty on homosexuals (Leviticus 20:13).  Canada is already seeing such litigation trying to be passed against the Word of God.  So what the devil is trying to do now is to CONFUSE everyone by ordaining Sodomite ministers into the clergy.  It's working.  Only the minority of genuine believers who are close to the Lord and living in their Bibles see what the devil is doing.  Wake up America!

Stand up! Stand up for Jesus, ye soldiers of the cross!!!

Lift high His royal banner, it must not suffer loss!

From victory unto victory, His army shall He lead.

'Til every foe is vanquished and Christ is Lord indeed.