The I AM statements of Jesus Christ

Psalms 125:2, “As the mountains are round about Jerusalem, so the LORD is round about his people from henceforth even for ever.” 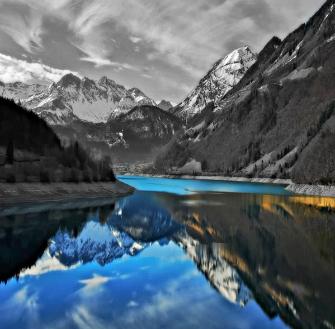 What a precious promise from God—He will always be around, just like the Mountains that don't move. Mountains are mighty and strong, just as our God and Savior, Jesus Christ! If you're on I believe that everything in nature was designed purposely by an omnipotent (all-powerful) God to teach us continual truths.

We know Biblically that God doesn't speak to us through any other means today, then through His dear Son, Jesus Christ, Who is the incarnate Word of God (John 1:1-3,14; Revelation 19:10). God speaks to us through His holy Scriptures by the power of the Holy Spirit of God.

However, the Bible is also very clear from Scripture passages such as Psalm 19:1-3 and Romans 1:20 that nature DOES indeed speak to us in all languages, teaching divine truths which cannot be denied, so that we are without excuse.

John 5:37, “And the Father himself, who sent me, has borne witness of me. You have neither heard his voice at any time, nor seen his shape.” Only a literal Person could have a shape.

Jesus gives the source of His commission, which is from the Father personally. It is the Father's voice and form they have not seen, yet Christ has.

Christ who is called the exact image of the invisible Father is the voice that the people heard. He then says that they search the Scriptures in them you think you have eternal life but they testify of me."(v.39) The Son is said to be the eternal life with the Father.

Are we to believe the Scriptures testify of only a human being and not God himself? In the end of the discourse Jesus says in vs.46-47 "If you believed Moses you would believe Me; for he wrote about me. But if you don’t believe his writings, how will you believe my words?"

When did Moses write of him? Deuteronomy 18:15-19: "The LORD your God will raise up for you a Prophet like me from your midst, from your brethren. Him you shall hear, "according to all you desired of the LORD your God in Horeb in the day of the assembly, saying, 'Let me not hear again the voice of the LORD my God, nor let me see this great fire anymore, lest I die.' "And the LORD said to me: 'What they have spoken is good. 'I will raise up for them a Prophet like you from among their brethren, and will put My words in His mouth, and He shall speak to them all that I command Him. 'And it shall be that whoever will not hear My words, which He speaks in My name, I will require it of him." Jesus claims to be the prophet Moses spoke of that should listen to. Notice that it says they did not want to hear the voice of the Lord anymore or see his glory in Horeb. Then God says he will put his words in a future prophets mouth if they do not listen to his words, God will require it of him." This very thing Jesus said of himself in Jn.8:24 "Therefore I said to you that you will die in your sins; for if you do not believe that I am (He), you will die in your sins."

John 6:51:"I am the living bread which came down from heaven. If anyone eats of this bread, he will live forever;"

John 8:12: Then Jesus spoke to them again, saying, "I AM the light of the world. He who follows Me shall not walk in darkness, but have the light of life."

John 10:36: "do you say of Him whom the Father sanctified and sent into the world, 'You are blaspheming,' because I said, 'I am the Son of God'?

John 11:25: Jesus said to her, "I AM the resurrection and the life. He who believes in Me, though he may die, he shall live.

John 14:6: Jesus said to him, "I AM the way, the truth, and the life. No one comes to the Father except through Me.

Acts 7:32: Stephen speaking of Moses' encounter at the burning bush  "saying, 'I am the God of your fathers-- the God of Abraham, the God of Isaac, and the God of Jacob.' And Moses trembled and dared not look."

Acts 9:5: And he said, "Who are You, Lord?" And the Lord said, "I am Jesus, whom you are persecuting. It is hard for you to kick against the goads."

The I Am In the Old Testament was whatever man needed He became, he was his all in all. Jesus in the New Testament uses all the examples to show who He is. He is everything to man and the only way to God.

Christ's Deity Was questioned many times in different ways, and many times it was Affirmed by both God and man:

The IF of Satan

God's Testimony: -This is My beloved Son, in whom I am well pleased" (Matt. 3:17 ) Affirmed by God the Father.

Christ's Testimony v.25 Jesus answered them, "I told you, and you do not believe. The works that I do in My Father's name, they bear witness of Me."v.36"I am the Son of God.". Affirmed by Jesus

The IF of the Chief Priests

Nathanael's Testimony: -"Thou art the Son of God, Thou art the King of Israel" (John 1: 16). Affirmed by a Jew with no guile. Luke 23:38And an inscription also was written over Him in letters of Greek, Latin, and Hebrew: THIS IS THE KING OF THE JEWS

The IF of the passers

The Centurion's Testimony-Truly this was the Son of God" (Matt. 27: 54). Affirmed by a Roman witness

The IF of the Rulers

the Father "If I honor Myself, My honor is nothing. It is My Father who honors Me, of whom you say that He is your God. John 8:54

the IF of the Pharisee

"This man, IF He were a prophet, would know who and what manner of woman this is who is touching Him, for she is a sinner."

Jesus’ testimony But Jesus did not commit Himself to them, because He knew all men, John 2:24

Luke 19:10"for the Son of Man has come to seek and to save that which was lost." Affirmed by Jesus

The IF of the high priest

Jesus’ Testimony "It is as you said. Nevertheless, I say to you, hereafter you will see the Son of Man sitting at the right hand of the Power, and coming on the clouds of heaven." Matt 26:64 affirmed by Jesus

The thief’s testimony Then he said to Jesus, "Lord, remember me when You come into Your kingdom." (Luke 23:42) Affirmed by a criminal put to death.

Why would Satan challenge on his being the Son of God if son only meant his humanity or being a child of God in the general sense like anyone else. It was an assault on His true person who He was before he came to earth. For one to claim specifically to be God's Son was to claim a unique relationship that no one else has. In Jn.5:18, the Jews wanted to kill him because He said God was his Father, making himself equal with God (in nature.) This meant a special relationship that excludes anyone else is able to have. In Jn.10:30 Jesus claimed “I and my Father are one.” In V.33 the Jews pick up stones because they understood this as blasphemy in v.36 Jesus interprets what He meant by saying, “because I said, I am the Son of God.”

4 TITLES of Son are used in the New Testament:

SOURCE: I Am statements of Jesus

It's the Blood of Jesus!