"And they were all filled with the Holy Ghost, and began to speak with other tongues, as the Spirit gave them utterance ... Now when this was noised abroad, the multitude came together, and were confounded, because that every man heard them speak in his own language." —Acts 2:4,6

We have all heard the term "speaking in tongues"; but, no one actually spoke in tongues in the Bible.  Rather, they spoke in their own language, and the listeners heard the message in their own native language.  We read in Acts 2:8-11, "And how hear we every man in our own tongue, wherein we were born?  Parthians, and Medes, and Elamites, and the dwellers in Mesopotamia, and in Judaea, and Cappadocia, in Pontus, and Asia, Phrygia, and Pamphylia, in Egypt, and in the parts of Libya about Cyrene, and strangers of Rome, Jews and proselytes, Cretes and Arabians, we do hear them speak in our tongues the wonderful works of God."

So none of the Apostles, nor any of the New Testament saints, ever spoke in some unknown Heavenly jibber-jabber; but rather, in their own native language.  The gift, or miracle, of tongues was manifest in the hearing of the Word, and NOT the speaking.  The term "speaking in tongues" is often misunderstood, somewhat of a misnomer.  When the Bible mentions "speaking in tongues," it is referring to hearing in tongues.  When the Gentile converts spoke with "tongues" in Acts 10:46, it was the same Greek word for "tongues" as in Acts 2:4 ("glossa," meaning, "the language or dialect used by a particular people distinct from that of other nations.").  It was a KNOWN earthly language.  The same Greek word is used by the Apostle Paul in 1st Corinthians 14:18, "I thank my God, I speak with tongues more than ye all."  Paul was fluent was different languages.

Sign Miracle of Tongues verses the Gift of Tongues

A clear distinction needs to be made between the sign miracle of tongues in Acts 2, and the "gift" of tongues (languages) which Paul spoke of in 1st Corinthians 14:18.  It is also very important to notice that NO ONE in the Bible ever decided to initiate the miracle of tongues, it was ALWAYS initiated by God alone.  In sharp contrast, the language gift of tongues for today is something which we can use daily as we serve the Lord, trying to get people saved with that gift.  There is NO sign miracle of tongues today; but there is a "gift" of languages.  Some people are gifted musicians, others are gifted orators, some are gifted writers, and some are gifted interpreters.  However, there is no need for the sign gifts today, because we have the completed Word of God.  This is evidenced by the Apostle Paul's inability to heal his co-laborer in the Lord and friend, Timothy (1st Timothy 5:23).  Paul said he had left Trophimus at Miletum ... SICK! (2nd Timothy 4:20.  The sign gift of healing promised by Jesus in Mark 16:18 had come and gone.  If there were a gift of healing today, the hospitals would be empty; but they are filled to capacity.

We read in Revelation 7:9, "After this I beheld, and, lo, a great multitude, which no man could number, of all nations, and kindreds, and people, and tongues..."  It is abundantly clear from Revelation 7:9 that the word "tongues" here is referring to established earthly languages.  The word for "tongues" here is "glossa," the same as in Acts 2 and 1st Corinthians 14.  So there is no debate for the honest Bible student concerning the word "tongues," it simply means known earthly "languages."  This is also confirmed in Acts 2:6, "...every man heard them speak in his own language."  Although some may debate whether the sign miracle of tongues is available today--the fact that Paul couldn't heal Timothy, Trophimus, or even himself of his thorn in the flesh--should be convincing enough evidence that the sign miracle of tongues ceased by the end of the New Testament time period.  Notice in 1st Corinthians 14:18 that the Apostle Paul proclaimed, "I thank my God, I speak with tongues more than ye all."  Again, in sharp contrast, we read in Acts 2:6, "...every man HEARD them speak in his own language."  The miracle of tongues in Acts 2 allowed the multitudes from at least 16 different nations to HEAR the Gospel in their own native language; but Peter was only preaching in Greek.  In 1st Corinthians 14, Paul is able to SPEAK in various languages which God has gifted him to learn.

So the nonsensical babbling that goes on all across the world in Charismatic /Pentecostal /Assemblies of God Churches today is demonic!  The MIRACLE of tongues in the Bible was exclusively for the purpose of soulwinning; whereas the GIFT of tongues today can also be used for edifying (i.e. building up the church through Bible-study).  However, the Bible teaches that the proper gift of tongues in not confusing (1st Corinthians 14:33).  The mumbo-jumbo that goes on in Charismatic churches today is utter foolishness!!!  The Apostle Paul said he'd rather speak five words which could be understood, than 10,000 that couldn't (1st Corinthians 14:19)!  I think those five words to Charismatics today would be something like ..."You folks are really crazy!"  I am not being unkind, that's exactly what Paul said in 1st Corinthians 14:23, "...will they not say that ye are mad?"  The goofy rambling of incoherent utterances by Charismatics today is nothing less than CRAZY!

The Sign Gift of Tongues Ceased in the New Testament Period

The heathen practice of speaking in tongues today is NOT found in the Word of God.  Some believers today question whether the gifts of tongues is still valid; but they have a completely wrong understanding of what tongues is to begin with.  Biblical speaking in tongues was a sign gift, to validate the message of the Apostles.  The Word of God wasn't completed until A.D. 96, and the sign gifts ceased near the completion of the Bible.  There is no speaking in tongues today, as there was in Acts Chapter 2.  And there NEVER was a jibber-jabber type of speaking, as the Charismatic Pentecostals practice today.  All such foolishness is of then Devil.  Why don't the Charismatics ever reproduce the mighty rushing wind, or the cloven tongues of fire, or the 3,000 people saved from Acts 2?  Why do they only try to imitate the speaking in tongues?  It's because any idiot can ramble a bunch of nonsensical words, and claim it is of God.  The tongues which the Assembly of God Churches, Oral Roberts, Christian International Ministries, Bill Hamon, Benny Hinn, Creflo Dollar, Kenneth Copeland, Pentecostals, Charismatics, and many others practice today is SATANIC!

Charismatic Speaking in Tongues is of the Devil 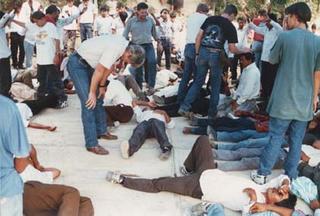 Charismatics teach that speaking in tongues (as they practice it), is a sign of being spiritual, proof of being saved, and being full of the Holy Spirit.  However, this teaching is NOT taught in the Word of God.  The Apostle John wrote the New Testament Books of 1st, 2nd, and 3rd John.  John declares in 1st John 5:13, "These things have I written unto you that believe on the name of the Son of God; that ye may KNOW that ye have eternal life, and that ye may believe on the name of the Son of God."  If speaking in tongues is evidence of salvation, as Pentecostals claim it is, then why DIDN'T John mention tongues even once in his epistles?  I mean, John stated that he wrote his epistle of 1st John so that we may KNOW that we are saved; yet he NEVER mentions "tongues."  The Biblical sign of one's salvation is a changed life (2nd Corinthians 5:17).  John spoke of love, and keeping God's commandments; but, he never mentions tongues.  He never mentions baptism either.  Yet so many false religions today MANDATE baptism, speaking in tongues, etc.  Charismatic jibber-jabber tongues is of the Devil.  The Biblical sign gift of tongues in Acts 2 and Acts 10 ceased by the end of the New Testament.  The legitimate gift of tongues today is simply the ability to work with multiple languages for the purpose of winning souls to Christ.

Any carrying on with mumbo-jumbo, hocus-pocus, spontaneous jibber-jabber is NOT of the Holy Spirit; but is of a familiar spirit.  A familiar spirit is any spirit that is not the Holy Spirit.  These are demonic influences.  No believer should ever partake of the Charismatic movement's speaking in tongues, or of the Word of Faith movement, because they are of the Devil.  Jesus never spoke in tongues; but He did wash His disciple's feet as an example for us to follow.  Jesus did witness the Gospel to others.  If speaking in Charismatic tongues were so important, then why doesn't the Bible place any emphasis upon it, as the Pentecostals do?  The purpose of ALL of the gifts of the Holy Spirit is to win lost souls to Jesus Christ; not to make a display for entertainment.  Charismatics have turned the house of God into an entertainment center--with their drums, screeching guitars, falling on the floor, rolling on the floor, laughing, barking, acting crazy!  They make a mockery of decency and the Word of God.  Then there's Oral Roberts 900 foot Jesus which he claimed to have seen.  How about Benny Hinn's Holy Spirit machine gun?  These are imposters, wolves, who come to us dressed in sheep's clothing.

Biblical tongues today is simply the ability to work with multiple languages.  I've always loved musical instruments, it comes natural to me.  Some people can play a radio, and that's about it.  I've never liked making speeches, and I hate talking on the phone.  I feel much more comfortable writing, and I believe God has a purpose for me in this endeavor.  Some people are quick on their feet, and are good talkers.  I on the other hand usually say the wrong thing and put my foot in my mouth.  I have often asked myself why I had said what I said to someone.  Therefore, I usually stay quiet.  But I enjoy writing, because I can reread my article as many times as necessary to ensure it is exactly what I want to say.  I have often spent 6-8 hours writing one article for this website, sometimes even longer.  It must be just right, because it is going to influence someone, and I want to honor God and the Truth of God's Word.  I am accountable to God for what I teach people; therefore, I take great responsibility in every article I write and publish for others to read.  I want to use my talents and resources for God.

Charismatic tongues is dangerous, because it involves familiar spirits.  It also draws unsaved people into church for the wrong reasons.  It's the same problem with so-called "Christian rock."  People come to the rock music, not to Jesus Christ.  Most people join Charismatic churches because of the excitement and entertainment, not because they want to find God.  As a result, many people find churchianity without Christianity.  We are living in apostate times, when most people have religion without God, and knowledge without truth.  Let us be diligent to contend for the faith, and expose Satan's works of darkness.  Speaking in Charismatic tongues is evil, and is nowhere taught in the Word of God.  Don't be misled by the false prophets of Pentecostalism, speaking in Charismatic tongues is of the Devil.

I would highly recommend the free online book, FACE TO FACE WITH TONGUES, by Pastor Max D. Younce, Th.D.