"Except ye repent, ye shall all likewise perish" -Luke 13:5

These were the Words spoken by our Lord Jesus Christ.  People back in the Bible were no different than people today...we all like to talk about people and news (especially if it's bad).  These folks had heard about Pilate brutally executing some Galilaeans.  They mentioned the bad news to Jesus.  Most of us would have responded with sympathy for the victims.  However, Jesus responded by informing them that they just might be next.  Wow!  Can you imagine the look on their faces?  Jesus then decided to mention another tragedy where eighteen people lost their lives when a wall fell upon them.  Jesus clearly warned these folks that they would die the same fate if they refused to repent.

What did Jesus mean when He warned..."Except ye repent, ye shall all likewise perish"?  Our Lord simply meant that death often comes unexpectedly in life, and then it's too late to get saved.  You see my friend, if you don't get born-again, then you CANNOT go to heaven.

"Jesus answered and said unto him, Verily, verily, I say unto thee, Except a man be born again, he cannot see the kingdom of God." -John 3:3

The ONLY way for any sinner to get to heaven is through Jesus Christ (John 14:6).  Jesus has the scars in His hands and feet, so we must only trust ONLY Jesus to forgive us and take us to heaven. 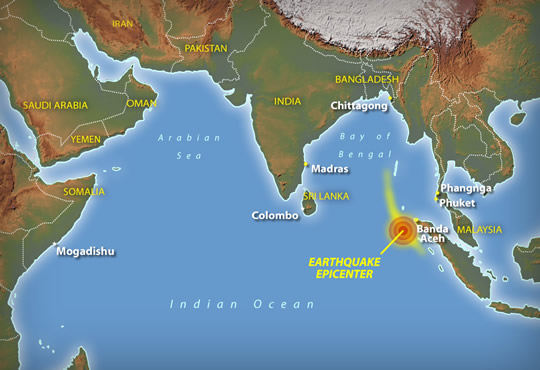 The most powerful earthquake in 40 years erupted under the Indian Ocean near Sumatra on Dec. 26, 2004. It caused giant, deadly waves to crash ashore in nearly a dozen countries, killing tens of thousands. 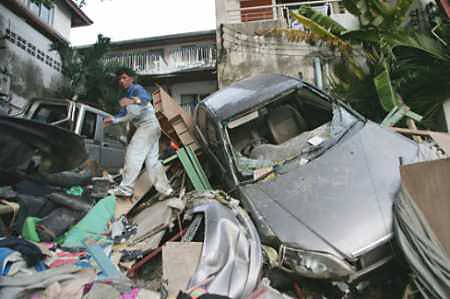 A worker clears debris in the Thai resort island of Phuket, December 29, 2004. Rescuers scoured remote coastlines around the Indian Ocean for survivors of Sunday's devastating tsunami.

Those 220,000 people throughout India, Sri Lanka and many other countries didn't know what hit them!  Tsunami's often strike with little or no warning.  The earthquake happened hundreds of miles away so no one knew about it.  Can you imagine any event so devastating that it would claim 220,000 lives in one day?   As a matter of fact, there is such a catastrophic event which occurs EVERY SINGLE DAY in this world...it's called "death."  To know more, please read Billions of People Going to Hell.

"Boast not thyself of to morrow; for thou knowest not what a day may bring forth." -Proverb 27:1

Thai health officials bury the dead in masses at a burial site in Takuapa, nearly 130 km north of the Thai resort island of Phuket December 31, 2004. The bodies were being buried until relatives could identify them by DNA samples taken earlier. The death toll in Thailand sprawled to 4,500 after a tsunami, caused by a magnitude 9.0 quake off the northern Indonesian coast on December 26, devastated the southern tourist isles and beaches. REUTERS/Adrees Latif

A Thai health official checks identification before hundreds of victims of Sunday's quake-triggered tidal wave are buried in a mass burial site in Takuapa, about 130 km (80 miles) north of the Thai resort island of Phuket on December 31, 2004.

The point that Jesus was making to those folks in Luke thirteen is that we must each individually prepare to meet God.  Death can come suddenly and then it will be too late to repent of our unbelief and sin.  Are you ready to face God?  MOST people are NOT ready to meet their Maker...not at all ready.  To be ready, you must become a born-again Christian by asking Jesus Christ to forgive you of your sins, believing that He is the Saviour.  To go to heaven, you MUST get born-again (John 3:3).  Being religious is a sure road to hell.  You don't have to give up anything to be saved except your unbelief.  It is easy to be saved if you are willing to place ALL your faith in the Lord Jesus Christ as your personal Saviour.  The bottom line is that we are all sinners in need of a Saviour.  Jesus Christ is the ONLY Saviour!  Would you like to KNOW for sure that you are going to heaven when you die?  1st John 5:13 tells that we can certainly know for sure.

"Except ye repent, ye shall all likewise perish" -Luke 13:5

How to go to Heaven 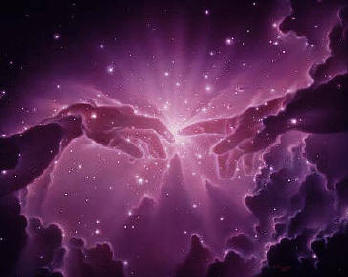 Are you really a Christian?