Hell is Forever ... Think About That!

Jude 1:7, “Even as Sodom and Gomorrha ...are set forth for an example, suffering the VENGEANCE OF ETERNAL FIRE” 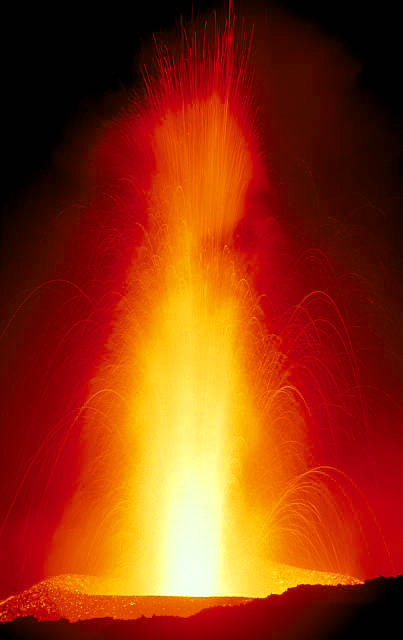 The Bible speaks of the “vengeance of eternal fire.” Hell is forever. 2nd Thessalonians 1:8-9 warns, “In flaming fire taking vengeance on them that know not God, and that obey not the gospel of our Lord Jesus Christ: Who shall be punished with everlasting destruction from the presence of the Lord, and from the glory of his power.” Again we read in the Bible about God “taking vengeance” with “flaming fire,” to be “punished with everlasting destruction.”

(Note: All Scriptures references are only to the trustworthy King James Bible)

Clearly, the Bible speaks of more than just physical death, for God could simply leave one's dead body in the grave. Instead, Revelation 20:13 teaches that the dead will be raised up to stand in judgment before God, “And the sea gave up the dead which were in it; and death and hell [Greek: Hades] delivered up the dead which were in them: and they were judged every man according to their works.” This is The Great White Throne of Judgment, only for the unsaved, the wicked, who die in their sins without Jesus Christ.

Revelation 20:15, “And whosoever was not found written in the book of life was cast into the lake of fire [Greek: Gehenna].” This is the Second Death, eternal destruction from the presence of God. Think about that! The Word of God plainly teaches that Hell is punishment, and that it involves being tormented by God's vengeance in flames of fire FOREVER.

Perhaps you have a hard time accepting this Biblical teaching. May I say, dare you risk your eternal destiny based upon your feelings instead of the written Words of God? I didn't write the Bible, I'm just telling you what it says. Perhaps no one has ever warned you from the Scriptures concerning the truth about Hell. I mean no unkindness, but Hell is FOREVER. I don't want you to go to Hell. It is not a matter of what we feel, nor of how we perceive things, nor of what men may say, nor of what religion says; but rather, “WHAT SAITH THE SCRIPTURE?” (Romans 4:3). The Scripture warns in 2nd Thessalonians 1:8 that all those who perish in their sins, never having obeyed the Gospel, will suffer the eternal wrath of God in Hell (Greek: Gehenna, i.e., the Lake of Fire).

We read in John 3:36, “He that believeth on the Son hath everlasting life: and he that believeth not the Son shall not see life; but THE WRATH OF GOD ABIDETH ON HIM.” Romans 5:9, “Much more then, being now justified by His blood, we shall be SAVED FROM WRATH THROUGH HIM [Jesus Christ].” Romans 1:18 and 2:5, “For THE WRATH OF GOD is revealed from heaven against all ungodliness and unrighteousness of men, who hold the truth in unrighteousness ... But after thy hardness and impenitent heart TREASUREST UP UNTO THYSELF WRATH against the DAY OF WRATH and revelation of the righteous JUDGMENT OF GOD.” How much clearer could the Bible be that judgment day is coming? How much plainer could the Scriptures be that God's wrath is laid up against the unsaved?

Revelation 20:10 teaches that Satan will be cast into the Lake of Fire FOREVER, “And the devil that deceived them [the world] was cast into the lake of fire and brimstone [lava], where the beast and the false prophet are, and shall be tormented day and night for ever and ever.”

Revelation 21:8, “But the fearful, and unbelieving, and the abominable, and murderers, and whoremongers, and sorcerers, and idolaters, and all liars, shall have their part in the LAKE WHICH BURNETH WITH FIRE AND BRIMSTONE: which is the SECOND DEATH.”

The Bible is abundantly clear on this matter... HELL IS FOREVER FOR ALL CHRIST-REJECTERS! As we read in Romans 5:9, we are justified by Christ's blood, i.e., by HIS RIGHTEOUSNESS, and thus spared from the wrath of God. We have no self-righteousness of our own to offer God (Isaiah 64:6); therefore, we need the imputed righteousness of Jesus Christ. Romans 4:6, “Even as David also describeth the blessedness of the man, unto whom God IMPUTETH RIGHTEOUSNESS WITHOUT WORKS.” Amen!

That means when a lost sinner acknowledges their guilt of sin and places their trust solely in Jesus Christ to forgive their sins, God the Father imputes (charges) Christ's righteousness to that person's record in Heaven. From that point on God views that person as having the righteousness of Jesus Christ. Thus, the Christian believer is saved entirely by Christ's work of redemption, and not by any self-righteousness we have done or think we ever could do. We cannot. Salvation is entirely of the Lord God. Our part is simply to acknowledge our debt of sin and believe on Jesus, the Christ, the Son of God.

Hell is FOREVER. Think about that. Even after 1,000,000,000,000 years will have passed, it won't even be the beginning of your punishment. Are you willing to take the risk that the Bible is wrong? Are you willing to risk spending all eternity burning in the flames of Hell, just because you cannot comprehend how a loving God could punish someone in flaming fire forever? Please understand, God doesn't allow lost sinners to go to Hell; but rather, God sends them there deliberately and takes His anger out upon them. This is exactly what the Bible teaches and you had better make sure you are saved, or you will be punished FOREVER in the fires of Hell.

The good news (which is exactly what the word Gospel means) is that God, in His unconditional love, sent His only begotten Son into the world to pay our sin debt. What a wonderful God! The Bible is abundantly clear in John 3:17 that JESUS CAME TO SAVE SINNERS!

If you go to Hell, it will only be because you chose to go there. Eternal life is the gift of God (Romans 6:23). Salvation is freely given (Romans 5:15), freely offered (Romans 10:13), and freely received (Revelation 22:17). Salvation is receiving, not giving. I hope and pray for the salvation of lost sinners, for that is why Jesus came into the world. There is nothing dearer to the heart of God than preaching the Gospel... “the power of God unto salvation to every one that believeth” (Romans 1:16). Please don't go to Hell. You don't have to. Your sin debt is paid, but you must receive the gift of God by placing your faith in Jesus as the Christ, i.e., the Messiah, the Savior. There is NO salvation apart from faith alone in the name of Jesus (Acts 4:10-12).

Acts 10:43, “To Him [Jesus] give all the prophets witness, that through His name whosoever believeth in Him shall receive remission of sins.” The decision is yours alone to make. Hell is forever ... think about that!

"That they all might be damned who believed not the truth, but had pleasure in unrighteousness." —2nd Thessalonians 2:12

(Pastor Danny Castle; if a preacher doesn't preach on Hellfire, he's not doing his duty!)

“They Have No Rest Day Nor Night”