The Devil is On the Screen

Why Do People Want To Watch This Garbage?  Isn't the world violent enough already?

Is it any wonder why some people refer to Hollywood as "Hollyweird?"  Not at all.

The following article was featured in the October 28th, 2003 Chicago Sun-times: 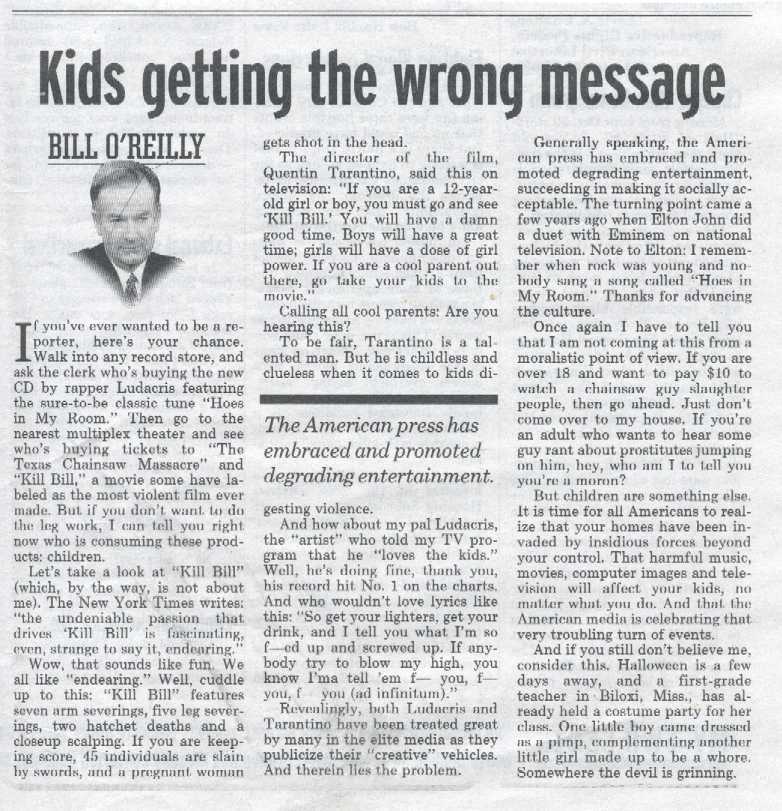 It is appalling, not to mention just down right sickening what Hollywood is creating nowadays.  There are a few verses that come to mind when I think of Hollywood and the entertainment industry...

Proverb 12:2 - "A good man obtaineth favour of the LORD: but a man of wicked devices will he condemn."

Hugh Hefner and Larry Flint are men of wicked devices...they exploit women to make filthy lucre.  Madonna, Britney Spears, Hilary Duff, and Tina Turner are women of wicked devices...they flaunt their bodies for all to see to make filthy lucre.  The abortion industry is an evil practice of wicked devices used to reduce the population by murdering children.   The alcohol and tobacco industries are guilty of creating wicked devices to make filthy lucre (which hurts and kills people by the millions).  The perverted and sinfully arrogant entertainment industry that mocks everything that is decent, holy and upright.  The wicked manure-spreading news media that capitalizes on the hardships and tragedies of others by making them a spectacle for all to see.   The godless so-called "Christian" publishing companies that publish watered-down and perverted counterfeit bibles (Like the New International Perversion)...ALL modern Bible versions diminish the deity of Jesus Christ.  Every person that partakes in the industries that help destroy the lives of others WILL be held accountable by God as accomplices to their crimes against God and humanity.  The gambling industry will give account To God almighty for every person that falls victim to their evil inventions and ends up in the dog house financially.  It is a wicked sin to take advantage of people (especially weak people).  Everything in this wicked world comes down to money, fame and power; thank God heaven is different.  Is it any wonder then that God tells us that the whole world lieth in wickedness (1st John 5:19).

Ecclesiastes 7:29 - "Lo, this only have I found, that God hath made man upright; but they have sought out many inventions."

Proverb 4:17 - "For they eat the bread of wickedness, and drink the wine of violence."

Oh how wicked are the sins of Hollywood and all the whores and whoremongers that partake of her evil delights.  Though God loves sinners, He hates sin and it is an abomination unto Him.

"These six things doth the LORD hate: yea, seven are an abomination unto him:  A proud look, a lying tongue, and hands that shed innocent blood, An heart that deviseth wicked imaginations..." - Proverbs 6:16-18

The movie "Kill Bill" is just one tiny fraction of all the sewage that has flowed out of Hollyweird over the decades.  It is a stench to the nostrils of God and any decent person.  America is known as the "Great Satan" around the world, much so because of it's love of pornography, violence and perversion of ever imaginable type.  God has been extremely longsuffering with America to tolerate our wickedness, but a nation CANNOT continue to sin without eventually coming to self-destruction.  God will not have to judge America because we will judge ourselves.  As sin continues, we become weaker and weaker as a nation.  Our nation is presently a house divided.  America's morals have never been any lower.  Sodomy is now well accepted by all government offices.  Unmarried sodomites can claim each other on their insurance in many cases, but heterosexual unmarried couples cannot (talk about hypocrisy).  Alcohol flows like rain through gutters in a thunderstorm across America (and hundreds of thousands of innocent people continue to die every year), yet the government is more worried about that five-gallon bucket in your home that a few children drowned in.  Indifference is commonplace nowadays.  All the smoke and mirrors in Washington cannot hide the truth.  The enemy will come upon us unexpectedly and our arrogance and love of sin will bring us down.

The television has degraded to sex, sex, sex.  American society is today a sex-crazed, disgusting and perverted society.  Hollyweird, the video game industry and all the other inventors of wicked devices in America are simply giving its people what they want...godless sewage and wickedness!!!  Notice that the producer of the movie in the newspaper article above recommends that parents take their children to see the movie.  Sadly, that is exactly what is happening.  Satan has a bid out for your child.  The devil is working overtime to indoctrinate your child with everything except the truth.  I thank God that I have come to the saving knowledge of the Lord Jesus Christ.  You won't find that in Hollyweird or on TV.  You won't find that in the heathen public school system.  You'll only find that in the Word of God.  Unfortunately, God and His Word were banned from the public school system by a godless government back in the 1970's (and we deceitfully say we are a nation that trusts in God).  Mark my words, the day is coming when no mention of God will be legally permitted on our money or in the pledge of allegiance.  We've replaced the Christ of Christmas with a big X-mas.  How horrible.  How wicked.  Where is your heart at today friend?  Are you a Christian?  Would you like to become a true Christian?  If so then simply admit that your a hell-deserving sinner to Jesus, believing that He is God.  Ask Jesus to forgive your sins and to take you to heaven.  Invite Him into your heart as your own personal Savior.  If you'd like to know more, Click below...