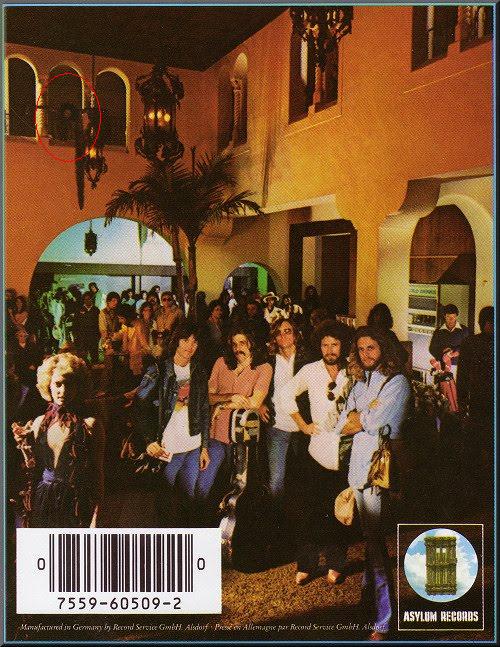 Hotel California is the hit album and song produced in 1976 by the Eagles' rock band.

On the inside of the album cover, pictured to the right, Anton LaVey (founder of the Church of Satan in 1966) is seen peering down from the balcony (who is circled in red).

The Eagles' manager, Larry Salter, admitted in the Waco Tribune-Herald (Feb. 28, 1982), that the Eagles were involved with the Church of Satan! Not surprisingly, one of the Eagles' songs is titled “Have A Good Day in Hell.”

Around the world, the song Hotel California is still aired on radio waves tens-of-thousands of times per day. The song has become as a national anthem in America! Nearly every band performs the song.

Here are some of the demonic lyrics from the song, Hotel California...

Mirrors on the ceiling,
The pink champagne on ice
And she said 'We are all just prisoners here, of our own device'
And in the master's chambers,
They gathered for the feast
They stab it with their steely knives,
But they just can't kill the beast

Last thing I remember, I was
Running for the door
I had to find the passage back
To the place I was before
'Relax,' said the night man,
'We are programmed to receive.
You can check-out any time you like,
But you can never leave!'

I've heard some pretty lame explanations of what these lyrics mean. Anyone who is familiar with the Bible knows that the Beast is the coming Antichrist (Revelation 20:10). Witchcraft lyrics are deliberately written in short incomplete phrases, to convey ideas without detection. Elton John collaborated with Bernie Taupin, a witch, to incorporate witchcraft lyrics into all his music. Even The Beach Boys were admittedly practicing witchcraft and trying to create witchcraft music back in the 1960's. There is MUCH witchcraft lyrics in secular music, dark sayings, which convey unholy ideas into the listener's mind.

ABOVE LEFT: Church of Satan founder, Anton LaVey. ABOVE RIGHT: Enlarged picture taken from the inside cover of the Eagles' "Hotel California" album. The photo shows Anton LaVey peering down on guests from a balcony.

Don't be deceived, Satan is the god of this world (2nd Corinthians 4:4). Satan is a spirit and controls the world through demonically-inspired secret societies that worship the Devil. Freemasonry is infamous for Luciferian worship, as openly acknowledged by one of their most infamous leaders, Albert Pike, who died on 1892. Pike accurately predicated World Wars I and II, and has also predicated World War III between Israel and the Arab world. This is not surprising, as Pike was privileged to key information known only by top Freemasons. Even today, the predatory ruling elite have a complete knowledge of their diabolical agendas; whereas the public can only try to connect the dots and solve the puzzle.

The world is ruled by secret societies and corrupt corporations. Rock 'N' Roll is a vehicle by which the New World Order has successfully bankrupt America morally. America has infected the world with it's wickedness. Hollywood is a disease. The Rock 'N' Roll culture is a depraved culture of immoral sex, substance abuse and disobedience to the Bible. This is why abortion is so prevalent in America, because fornication is pandemic. This is the sinful message of Rock 'N' Roll.

It was Communist dictator and brutal mass-murderer, Vladimir Lenin, who said, “The best revolutionary is a youth devoid of morals.” America's youth have had God taken away from them in the public schools. They've been taught that they evolved from stardust and apes. America's youth have been robbed of faith in God and have no moral compass today. Is it any wonder why our nation is in such a mess economically, morally and in every other way? America is going down in flames!

God will not bless a nation that goes into sin. Americans have shaken their fist in God's face by nicknaming one of their biggest cities, Las Vegas, to SIN CITY! Millions of Americans and visiting foreigners flock like cockroaches to SIN CITY to commit wickedness. 2nd Peter 2:14, “Having eyes full of adultery, and that cannot cease from sin; beguiling unstable souls: an heart they have exercised with covetous practices; cursed children.” America is cursed!

America has become a mentally-ill society, praising the wicked and condemning the righteous. The average person is not saved, i.e., they've never been born-again by the Word of God and His Holy Spirit. Jesus Christ is the Son of God. I believe that. Do you? John 20:31, “But these are written, that ye might believe that Jesus is the Christ, the Son of God; and that believing ye might have life through His name.” Amen and amen! Sadly, most people simply don't believe. Ronnie James Dio died and went to Hell on May 16, 2010. He died in his sins without Christ. Ronnie James Dio said in an interview that he viewed religion as fantasy, and questioned the legitimacy of the Bible. Yet, he openly admitted that the band BLACK SABBATH that he performed in was his religion. It is the religion of Satanism, evidenced by the horned Devil hand-sign that Ronnie James Dio popularized throughout his tragic sinful career.

The Eagles are one of thousands of rock bands who've sold their souls to Satan in exchange for worldly success and worldly prosperity. For those who are older, if you notice the bands from decades ago who are still popular today on the radio, most of them were either homosexuals, whoremongers, Communists, occultists, Satanists, feminists or witches. This is why The Doors, Elton John, Mannford Mann, Blue Oyster Cult, The Beatles, Ozzy Osbourne, Gene Simmons, Jefferson Starship, Madonna, The Beach Boys, The Rolling Stones, Van Halen, Fleetwood Mac and thousands of other bands sold out to Satan are still being promoted today.

Here's some food for thought. I think it's very interesting. Notice in the song Hotel California that the lyrics mention that they stab it with their steely knives, but they just can't kill the Beast. Now read what the Bible says concerning the Antichrist, the Beast, in Revelation 13:2-4 . . .

Revelation 13:2-4, “And the beast which I saw was like unto a leopard, and his feet were as the feet of a bear, and his mouth as the mouth of a lion: and the dragon gave him his power, and his seat, and great authority. And I saw one of his heads as it were wounded to death; and his deadly wound was healed: and all the world wondered after the beast. And they worshipped the dragon which gave power unto the beast: and they worshipped the beast, saying, Who is like unto the beast? who is able to make war with him?”

The Antichrist will be wounded, almost to death, but will survive. This is exactly what The Eagles' are singing in their song. Coincidence? I think not. There is no denying that the “Beast” is the Antichrist according to Revelation 13:2, unto whom the Dragon, the Devil, will give him POWER, a SEAT and great AUTHORITY.

Notice in Revelation 13:4 that the masses of the earth will worship the BEAST (Antichrist) and the DRAGON (Satan). This has already been happening for decades. Satan is worshipped at every rock concert. That's what rock concerts are! The group KISS, with demonic lead singer Gene Simmons, leap on stage as Rock 'N' Roll demons... puking blood, breathing fire and screaming... “God of rock 'n roll, we'll steal your virgin soul.” In their song “God of Thunder,” they command young people to kneel before Satan:

“I was raised by the demons, Trained to reign as the one,
God of thunder and rock and roll, The spell you're under,
Will slowly rob you of your virgin soul

I'm lord of the wasteland, a modern day man of steel
I gather darkness to please me and I COMMAND YOU TO KNEEL
Before, The God of thunder, the god of rock 'n roll
I'LL STEAL YOUR VIRGIN SOUL!”

These lyrics to the GOD OF THUNDER song are so offensive that the CD Universe website has blocked out the lyrics as a hidden track. It is sickening that Gene Simmons is paid millions-of-dollars for his disgusting life to be featured on cable TV in a show called, FAMILY JEWELS.

Just as Revelation 13:4 foretold that the world would worship the BEAST and the DRAGON, we are witnessing this in society today. Satan is openly worshipped in Marilyn Manson concerts, who's still touring around the world as of 2010...

“Manson, began burning Holy Bibles in his concerts, and giving 'alter calls' for Satan, by encouraging kids to reject Jesus Christ, and accept Satan into their hearts and minds, as well as accepting Manson as the Antichrist. He tells them to chant in unison, F#ck the Holy Spirit and F#ck Jesus Christ.”

The Beast and the Dragon are already being worshipped. Tragically, Marilyn Manson's band of the same name has sold 11,000,000 albums just in the United States. In the U.S. alone, three of the band's albums have been awarded platinum certification, three more gold, and the band has had three releases debut in the top ten, including two number-one albums. [1] Why should God bless America?

Ozzy Osborne and his fans openly worship the BEAST... 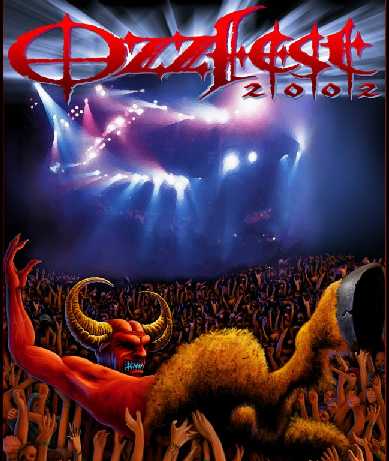 As a solo artist, Osbourne has sold more than 35 million records worldwide, bringing his cumulative sales to more than 60 million albums. Osbourne is currently visible on the smash MTV series “The Osbournes,” a melding of reality show, soap opera, and sitcom that follows the lives of Ozzy and his family. It recently became the highest rated original program in MTV's 24-year history.[2]

Ozzy Osbourne is infamous for biting the head off a live dove (and also a bat), dressing up like a woman, substance abuse, desecrating the Alamo in Texas by urinating on it, blaspheming Jesus Christ repeatedly, et cetera. Every one of Ozzy's album covers from the year 2000 until present feature Pan on the album cover... 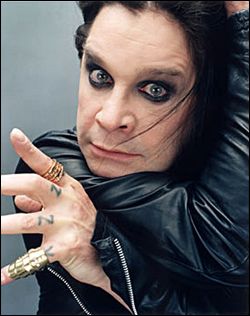 "The Ultimate Sin" album is released. Once again, Ozzy ran into trouble with the looks of his album cover. The original cover had 3 crucifixes atop a hill in the background and the girl had no pants on. Ozzy had actually written a whole album before the 'Ultimate Sin,' but scrapped the whole thing and started from scratch because he wasn't happy with it. The album hit hit #8 in the U.K. and #6 in the U.S., and eventually went double platinum.

A girl with no pants on in front of 3-crosses? This is the sick mind of Ozzy Osbourne! Yet, millions of Americans idolize Ozzy and have made him filthy rich from buying his works of darkness. Americans are mentally-ill to support such bizarre, demonic and crazy entertainers. As another tribute to the perverted Pagan god of Pan, the movie Pan's Labyrinth has become extremely popular, even being recommend by ChristianityToday and receiving 4-stars from them, go figure. They should rename their organization to ApostasyToday! It doesn't come as a surprise that apostate Billy Graham is the founder of ChristianityToday.

Hotel California is a tribute song to the Church of Satan; but moreover, it's a Satanic offering to the coming Antichrist, THE BEAST, who will be empowered by the Dragon, the Devil (Revelation 13:2).

“And have no fellowship with the unfruitful works of darkness, but rather reprove them.” —Ephesians 5:11

“Be ye not unequally yoked together with unbelievers: for what fellowship hath righteousness with unrighteousness? and what communion hath light with darkness?” —2nd Corinthians 6:14